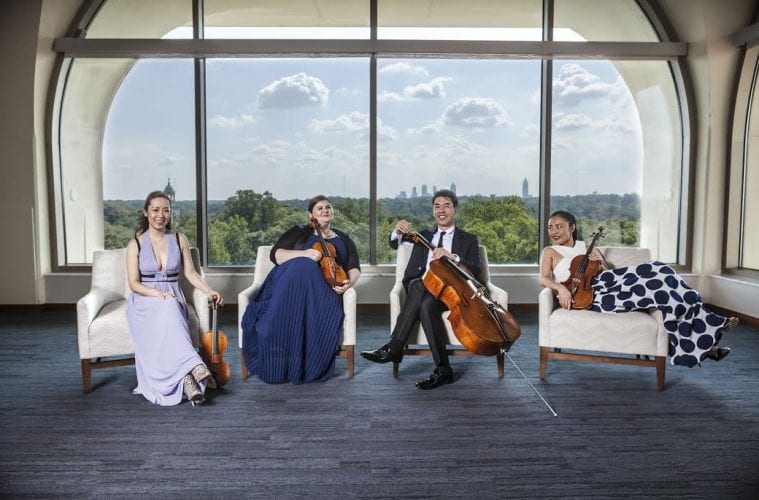 On Sunday’s rainy late afternoon, the Emory Chamber Music Society of Atlanta presented the Vega String Quartet along with pianists William Ransom and Elizabeth Pridgen in an all-Beethoven concert themed upon the number “7” at Emory University’s Schwartz Center for Performing Arts. The audience that showed up for the free event nearly filled the Center’s 800-seat Emerson Concert Hall.

Prior to the performance, Ransom — the chamber society’s artistic director — had some big news to relay: the creation of the Rebecca Katz-Doft Chamber Music Endowment. The result of a challenge to the chamber society from The Abraham J. and Phyllis Katz Foundation to match a $1 million grant within three years, its purpose is to fund in perpetuity the presence of a string quartet-in-residence at Emory University. That fund-raising goal, Ransom announced, has finally been met.

Since 2006, the first year the Vega String Quartet was in residency at Emory, the chamber society has had to annually raise money to fund it. With the new endowment in place, that ongoing effort will no longer be necessary, says Ransom, even if the Vega Quartet eventually moves on to different professional climes and is replaced by another quartet.

The concert opener, Beethoven’s Sonata No. 7 in C Minor for piano and violin, showcased the Vega Quartet’s new first violinist, Elizabeth Fayette, with Ransom at the piano. The second of the composer’s Opus 30 set, written in 1802, and is the largest and most serious of the group. It was, however, an era when such a sonata would be for “piano and violin” — not the other way around. An early title page for the work states plainly: “Sonata for the Piano Forte With an Accompaniment for the Violin.” Nevertheless, the violin part is hardly insubstantial or secondary. Fayette gave the violin part its due equal footing with Ransom’s piano, and at the same time her playing was unpretentious, in full service of the composer’s score.

Fayette was joined onstage by the rest of the Vega Quartet (violinist Jessica Shuang Wu, violist Yinzi Kong and cellist Guang Wang) for Beethoven’s String Quartet No. 7. The first of Beethoven’s middle period quartets and the first of his Op. 59 set, and considerably longer than any of his previous string quartets (Op. 18, Nos. 1-6). It proved a good demonstration that the addition of Fayette promises continuation of the Vega Quartet’s fine sense of ensemble, which can only improve as they play together more.

After intermission, Ransom returned to the stage with Pridgen to perform a transcription for piano duo of Beethoven’s Symphony No. 7 (Op. 92).

Back in the late 19th and early 20th centuries, the instrument of choice for music making in the well-heeled American home was a piano in the parlor. Playing music for piano duo — one piano, four hands — was a common social pastime. Often these were transcriptions of orchestral works, as that was the only way to study or hear these compositions unless there happened to be a symphony orchestra residing in town or one coming through on tour. So there exists a large body of such transcriptions, from the great symphonic and operatic canon to such then-popular barn-burners as the Overture to Zampa by the now mostly forgotten French opera composer, Ferdinand Hérold.

Musically, such transcriptions are essentially a matter of compromise. With something like Hérold’s Zampa Overture, there’s not much compromise needed. But a work like Beethoven’s Seventh Symphony, that’s another story in places where detail that is exposed well in an orchestra can be easily trapped in the solo piano texture or not even well-transcribed over in the first place.

Some of those problems emerged in the Symphony’s opening movement, in passages where density occluded more than presented power. They were less so in the Allegretto second movement, where Pridgen and Ransom were able to balance and bring out different voices more easily; likewise the Scherzo third movement. The final section of the fourth movement — a vigorous Allegro con brio — worked well as transcription, allowing the piano to ring powerfully in its concluding minutes without sounding thick as a brickbat.