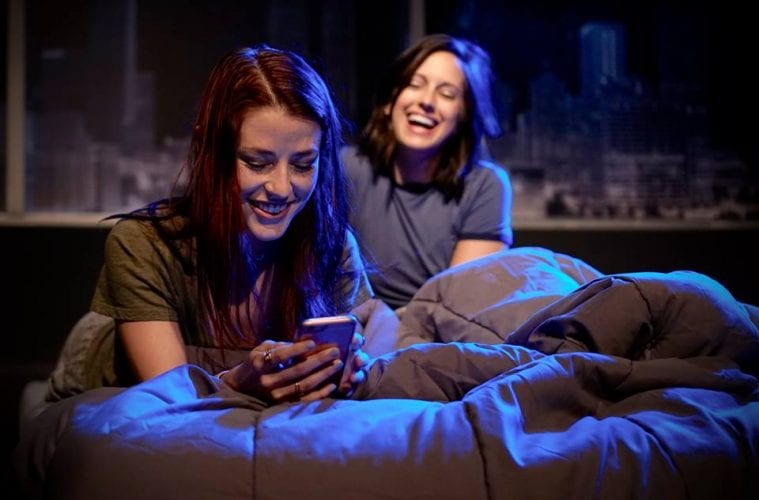 The world premiere play Girls Life by Grant McGowen at Pinch ‘N’ Ouch Theatre through October 23 centers on three women, each seemingly attacking the problems of urban life with a different strategy, and each seemingly suffering a different, though no less humbling, defeat. The production features two casts and two directors: the first, the opening cast in the current production, is directed by McGowen, and the second will be directed by Michelle Pokopac and opens October 13.

Janie (Christie Vozniak), Diana (Jackie Costello) and Catey (Alyx Libby) are friends (if that’s the right word). They bicker and compete as much as they support and comfort through a number of problems: relationships, identity, loss, breakups, coming out. Overall, too much seems to happen and not enough. The anxieties, neuroses and problems pile up, one on top of another, making the play seem overstuffed. But things also have little sense of forward motion, narrative arc or significant change. We move from interesting vignette to interesting vignette, making things seem flimsy, inconclusive and jumbled.

Jackie Costello does an especially fine job as the appealing but cosmically bored and disappointed Diana. Her late-show use of a wedding toast to warn a friend about the dangers of marriage becomes a fascinating study in social suicide. Christie Vozniak captures Janie’s abrasiveness, but both in the script and in the performance, the character seems too shrill and overwrought to be believed. Her comically hyper, unrelaxed monologue during a yoga session hits the target, but the character’s actions often seem genuinely dangerous and psychotic, rather than merely charmingly urban, contemporary and neurotic.

Alyx Libby provides a likeably chill stoner vibe as Catey. But as with the other characters, there’s something simply too self-absorbed, selfish and narcissistic about her that makes it hard to care from an audience’s perspective.

Much of the characters’ anxiety centers on the characters’ relationships to men, but male characters appear only briefly onstage, and some major male players never appear at all — they’re only spoken about — so we seldom get the chance to judge them and their overall suitability for ourselves.

Girls Life features some strong writing and interesting performances, but it never quite comes together as something that grabs us and makes us wonder what will happen to these people. We move from scene to scene without anything to unify or structure the action. I certainly wasn’t unhappy watching the show and I wasn’t tempted to leave. But it’s still worth noting that at intermission I didn’t have one narrative question, or any aspect of any character, that I was especially curious to see explored or answered in Act II.  For me, there were plenty of girls onstage, just not enough life.