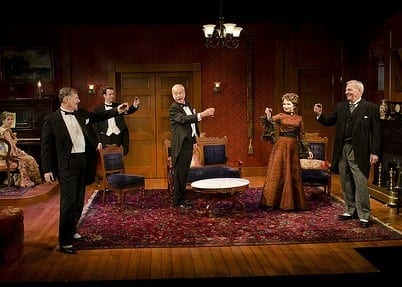 Review: Lillian Hellman’s “The Little Foxes,” as relevant as ever at Marietta’s Theatre in the Square

When Theatre in the Square co-founder Palmer Wells introduced its latest production, Lillian Hellman’s “The Little Foxes,” on Wednesday night, he told the audience of the theater’s previous production of the family melodrama. It was 1983, he recalled, when the theater space was in what is now a coffee shop.

Which made me wonder: what’s changed over the past 28 years to inspire a remounting? Then I was reminded of the recent Oscar-nominated documentary “The Inside Job,” about how Wall Street greed helped sink our economy into the Great Recession. And, moments earlier, I was driving past the infamous Mulligan’s Food & Spirits and its sign: “KEEP MARIETTA GREENER. DONT [sic] HIRE A BEANER!”

More than 70 years after it hit the boards, Hellman’s fiery familial allegory of greed and prejudice remains timeless. And while Fred Chappell’s direction does not seem to break new ground in this interpretation, maybe it’s best to keep the material familiar. It’s certainly as unsettling, in a production that, despite uneven performances, hooked the audience on this preview night. The show will run through April 10.

The most compelling performances are found in the play’s most sinister characters, with Jessica Phelps West, the theater’s assistant artistic director, as the conniving Regina Giddens and Clayton Landey as her older brother Ben. Peter Thomassen as the bumbling third sibling, Oscar, isn’t quite their equal, but he has his moments. (Above: Jessica Phelps West and Clayton Landey. Photo by Greg Mooney.)

Hellman’s play, set in a turn-of-the-century Southern town with hints of Georgia, follows the machinations of the Hubbard family. Having missed the aristocratic gene, the Hubbards get by on their various schemes. Oscar tried to marry wealth with Birdie (Mary Lynn Owen), the music-loving daughter of a plantation owner. Regina has settled for marriage to Horace (Ric Reitz), who’s done well as a banker but is no millionaire. Ben is a wheeler and dealer, and the play begins with the brothers about to persuade a Chicago businessman (Frank Roberts) to open a cotton mill down south.

There’s financing to be hashed out, and while the brothers’ money has them two-thirds of the way toward funding the deal, they need Regina — or, more accurately, Horace — to pony up the rest. This is where Regina finds her opportunity to become a player in a man’s world, but Horace, who is seeking medical treatment for an ailing heart in Baltimore, has tired of the family’s scheming and wants no part of it.

The siblings are so desperate to close the deal that they’ll try anything, including arranging a marriage between Oscar’s doltish son Leo (Jeff Edgerton) and Regina’s innocent daughter Alexandra (Galen Crawley). When it comes to money, what’s a little incest?

“The Little Foxes” has rightly placed Hellman somewhere between Anton Chekhov and Tennessee Williams in her fascination with family dysfunction and rivalry, and this production mines a lot of the attendant ideas to the audience’s delight. The Hubbards are a despicable lot, and West and Landey chew up the more insidious lines in the script as they embrace the “kill or be killed” credo of American capitalism.

While West sometimes overplays the physicality of her role, Landey is particularly effective, threatening his enemies with pointed fingers that suggest a “devil horn” sign that guarantees you’re gonna get yours. And he struts around Regina’s and Horace’s living room as if he owns it, laughing off every obstacle as if it’s an opportunity.

The rest of the cast is a mixed bag, which is a shame. Reitz struggles to make Horace the moral compass of the show, with Donna Biscoe as the maid Addie picking up the slack. This raises some of the more clichéd facets of Hellman’s script. Addie, the only African-American, dispenses facile bits of wisdom while enduring the brothers’ thoughtless peppering of the N-word. (Heck, even I got uncomfortable.) In the opening scene of the second act, all the innocents — Horace, Addie, Alexandra and Birdie — sit around the piano, playing music and even noting Oscar’s hatred of it. It’s as if to suggest that capitalism overwhelms culture, and whether that’s true or not, it gets lost in the clumsy delivery.

Crawley as Alexandra doesn’t help; as the hope for the next generation, she lacks the spirit to challenge Regina, and her curious lack of a Southern accent (a weird problem throughout the cast, actually) makes her feel even more out of place. Too often the world is filled with two types, Addie tells everyone: those who “eat up the earth” and those who stand by and watch it happen. It’s hard to believe that this Alexandra will rise to the occasion and fight the good fight.

As the drama drags to its predictably sad conclusion, we’re left hoping that the Hubbards will somehow learn some kind of lesson from the results of their scheming. But as the decades march on, we are continually reminded that the more things change, the more they stay the same.