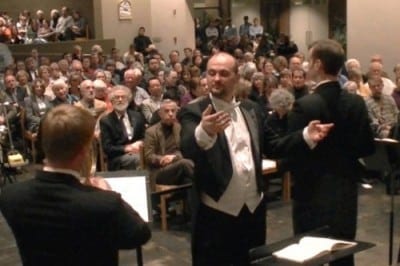 Bach’s B-minor Mass, assembled from parts and never performed complete during the composer’s lifetime, has become our standard for what we might call the grandiloquent sublime in music. It has become a central pillar of the canon, and thus can seem impossible to consider apart from its monumentality and our modern ideas of completeness.

Whether right or wrong, the trend in recent interpretation tends to emphasize this unity. Even historically informed groups sometimes adopt smoothness, with a complementary emphasis on beauty of tone, as the unifying factor. It’s as if we view the B-minor Mass through the lens of Voltaire’s Dr. Pangloss: things cannot be other than what they are, and everything is made for the best possible purpose. We’re talking Bach’s B-minor Mass, right? The Lord hath spoken.

Thus Saturday’s performance by the period-instrument ensemble New Trinity Baroque and the Georgia Tech Chamber Choir was a thoughtful, energizing exception that gave the B-minor Mass a fresh sound. Under New Trinity founder and conductor Predrag Gosta, they illuminated the various madrigal-like choruses and operatic arias with individual attention. The whole might not have been as monumental, but the parts were all the more interesting — and emotionally heartfelt — as a result.

And among other substantive matters, the concert was billed as the Atlanta debut of Joshua Rifkin’s 2006 scholarly performing edition of the Mass, which is said to strictly follow Bach’s “final” version, which might date to the last two years of his life, 1748-1750. Unlike other editions, Rifkin’s does not intermix elements from the 1733 Missa (with Bach’s original Kyrie and Gloria movements). I like it when interesting scholarship drives a strong performance.

I caught the middle performance of three, all with the same instrumentalists, choir and vocal soloists. The first two were in Atlanta: Tech choir director Jerry Ulrich led it Friday at St. John United Methodist Church, and Gosta conducted Saturday night at St. Bartholomew’s Episcopal, which was filled to capacity. On Sunday, they shipped the whole thing to Birmingham, Alabama, and the Mass was conducted by Gosta, Ulrich and the choir’s assistant conductor, Timothy Hsu. Multiple conductors over a weekend is certainly one way to keep the musicians alert, and undoubtedly contributed to the sense of artistic spontaneity. (A few days before the three NTB-Tech performances, Atlanta Sacred Chorale offered a modern-instrument version of the B-minor Mass. I’d be interested to hear comparisons from people who attended both.)

With Georgia Tech involved, it was no surprise that the program booklet cover had Bach broken down into his genome sequence, with little zeros and ones superimposed on his portrait. Inside, the 35 choristers were listed along with their majors, ranging from nuclear radiological engineering to old-fashioned computer science. As singers, they were surprisingly excellent, with lovely voices and a good blend, although it was hard to make out the Latin texts — often a trouble in the St. Bartholomew’s hard acoustic. They sang several key moments with regal authority, such as the “Confiteor unum baptisma,” so noble and gentle and pure. It’s a special pleasure to hear a student choir sing at a high level with enthusiasm and clarity of purpose.

The four vocal soloists were often compelling, more so in duets with the fine instrumentalists. Bass Paul Max Tipton had a pleasing voice but seemed to run out of air before finishing his line, which gave him an underpowered presence. Yet in the “Quoniam tu,” he and “natural” horn player Paul Hopkins radiated an earthy authority. Tenor Adam Kirkpatrick, who teaches at Kennesaw State, sang with theatrical spunk and a certain sweetness in the “Benedictus,” joined very movingly by flutist Karolina Bäter (photo below).

Soprano Wanda Yang Temko, a trained early-music singer and New Trinity regular, soared magnificently in the Kyrie and partnered nicely with countertenor Terry Barber, a former member of the virtuosic male singing troupe Chanticleer. Barber has star quality. With Marianne Pfau squawking beautifully on the pungent-sounding oboe d’amore, he sang “Qui sedes” with the panache of a Baroque opera hero. More than once he slipped into an obvious falsetto sound — all countertenors are essentially singing falsetto in a woman’s range; the trick is to make it sound natural. But overall his delivery was clear, fluid and fluttery, with an “antique” timbre.

Conductor Gosta kept it all pushing forward, even in moments where the urge to linger, to indulge, exerted a powerful pull. His tempos were not overly fast, but they felt fleet and he ended sections with a crisp cutoff — a very pleasant sensation. The Serbian-born harpsichordist and conductor is audibly gaining in interpretive heft, in parallel with his nascent conducting career, from the Gwinnett Ballet to concerts in Russia and Eastern Europe. There was plenty of scrappy playing from the orchestra, which isn’t unusual with sometimes raw-sounding period instruments, although concertmaster Martie Perry hit more than her share of clunkers. Still, Perry’s violinistic verve and the danceable rhythms and lyrical phrasing of her solos helped give this B-minor Mass its nimble freshness.