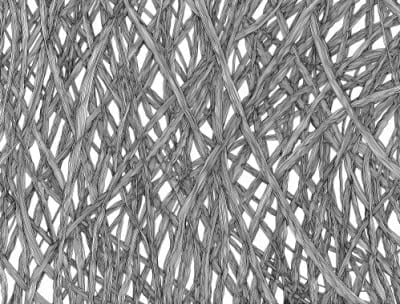 Contrary to retail blandishments, one size never fits all. Yet Hope Cohn, Spruill Gallery’s energetic director, organizes exhibitions that serve the multiple and sometimes competing interests of the community, offering a judicious mix of readily accessible and high-concept work by an equally broad cross-section of artists. “Align: An Exploration Into the Artistic Use of Line,” on view though March 19, is a case in point.

High on the accessibility index, Jeffrey Merritt’s charming wire animal sculptures exemplify line in space. They bring to mind Alexander Calder’s circus, though the self-taught artist knew nothing about them when he began bending wire. The drawings that George Vlosich makes on Etch-A-Sketch screens (example above) are not profound, but anyone who’s tried the thing will marvel at his virtuosity. It’s hard to get it to do anything but horizontal and vertical; Vlosich not only makes organic line but also shading and subtle detail. (There’s a demonstration video in the back, which Cohn has set to Steve Reich’s music.)

Cohn includes examples of line as shadow, written text and metaphorical alignment, but my favorites here are your basic works on paper. Architects do most of their drawing on the computer these days, but Margaret Fletcher and Barrett Feldman, who practice at Mack Scogin Merrill ElamArchitects, have lost neither their touch nor their desire to put pen to paper.

Feldman builds abstract compositions with a myriad of interwoven parallel lines (above). She creates different effects by manipulating the thickness, density and direction of the wavy lines as well as the proportions of positive and negative space. One piece might bring basketry to mind; another, alluvial furrows or plaits of hair.

Feldman thus turns line into nature. Photographer Lucinda Bunnen — who turned nature (withered lotus plants) into line in her series “Hatcher’s Pond” — finds the same elegance in the ordinary in a photo of a mysterious white curling form hovering in space, which is actually a piece of fishing line taken against a rock wall.

The dominance of the horizontal in Fletcher’s drawings recalls Agnes Martin and some works by Katherine Mitchell. In the more architectural of the two series on view, she stacks super-fine straight lines to create blocky shapes — pillars? towers? – which activate the white space around them. She tries a promising new direction, introducing a bit of chaos and quirk in a drawing in which straight lines bubble, quiver and hiccup like a mischievous EKG graph as the pen moves across the page.