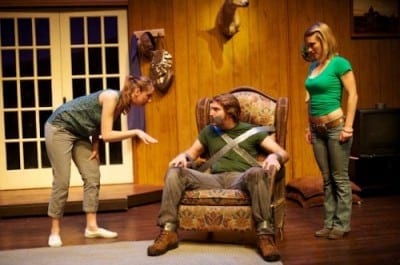 If the Coen Brothers decided to set a feminist revenge tale in Atlanta and sprinkle it with Dixie Chicks pixie dust, it might look something like “Exit, Pursued by a Bear,” a raucous comedy (interspersed with drama) of friendship, domestic abuse and performance-as-catharsis. The show runs through March 27 at Synchronicity Theatre at 7 Stages.

Nan Carter (Veronika Duerr) is a woman at wit’s end, married to underemployed Fox News-watchin’, deer-huntin’, Jack-guzzlin’ no-‘count husband Kyle (Nicholas Tecosky), who at some point in their marriage began to take out his frustrations — with a slap here, a busted lip there — on his wife.

When “Exit, Pursued by a Bear” begins, there is a spotlight on the mounted deer head that dominates Nan’s and Kyle’s wood-paneled living room. Another spot then illuminates Nan, likewise caught in the headlights. As many feminist theorists have pointed out, there is an equivalence in our society between the brutality with which animals are treated and the brutality to which women can be subjected. Playwright Lauren Gunderson makes a similar comparison between the creative, animal-loving Nan — who despises nature shows for reducing adorable critters to eventual bacon when the predator enters the fray — and her potential destiny, if she stays with Kyle, of winding up mounted and dead like that deer head. But à la Sarah Palin, Nan yearns to be a mama grizzly, and she has duct-taped Kyle to his easy chair in preparation for an act of nature’s vengeance. (It is somehow apropos that George W. Bush’s fave fix-it is the material with which the play’s trio of liberals strap down the Republican.) Nan has “a cocked and locked plan for your imminent demise,” she vamps to Kyle. In the play’s first scene, she has enlisted her best girlfriend, stripper Sweetheart (Taylor M. Dooley), in a drama of self-empowerment that Nan has devised. Sweetheart takes turns play-acting Kyle and then Nan in the story of Nan’s life, as drama becomes a kind of kick start to action and a way of provoking Kyle’s mea culpa. Nan’s vulnerability is tangible in Veronika Duerr’s performance, which wavers between traumatized and resolute, twin poles that one can only imagine many abused women must occupy. Duerr has the hardest job in “Exit,” occupying the dramatic locus of the play, and she is utterly believable in her fluctuations: talked back into her marriage when Kyle’s duct-taped mouth is uncovered, and then spurred to action by Sweetheart and Nan’s gay knight in shining pompoms, Simon (Clifton Guterman, left). With his shaggy hair and mildly combative idea of flirtation in early “scenes” from their marriage, Tecosky does a convincing job playing a lunk whose inferiority complex could inspire tender feelings in Nan, before that same inferiority turns sour and mean once into the marriage.

By performing her life, Nan is spurred to action in the many plays-within-a-play that give “Exit” its knowing, contemporary edge. Also wonderfully contemporary, with elements that suggest film transposed to stage, are director Rachel May’s and Gunderson’s use of supertitles to introduce characters and offer comic punchlines. The ironic twang of country music punctuates the scenes, and characters directly address the audience in asides that feel more “Funny Games” than Shakespeare (the inspiration behind the play’s title).

When Guterman enters wearing a cheerleader’s skirt, his snazzy metallic pompoms raised high, the whole tilt-a-whirl affair goes off the rails in the best way possible.

Synchronicity’s mission is to create positive social change and support the work of female artists, but it’s hard to know whether the message of self-empowerment offered by the comic sight of a husband duct-taped to a chair and drizzled with honey is exactly the agency most victims of domestic violence are looking for.

There is no denying “Exit’s” comic chops. In fact, the Holly Hunter-meets-Beverly D’Angelo sauce dished out by Dooley combined with the anarchic hilarity of Guterman’s vengeful gay BFF tend to tip the balance of the play from comedy-drama to comedy with the merest whiff of drama. The action takes a distinct slowdown when Nan and Kyle re-enact their courtship, one of several backward glances that greatly impede the play’s necessary motion forward.

Sweetheart and Simon are just too much fun to watch: farcical, Southern-fried lunatics far too big for the diminished lives in which they have found themselves. As these two pouting torsos strut across the stage, “Exit” shifts from “Thelma & Louise” to “Raising Arizona.” And so, at a certain point, calling “Exit” a play about domestic abuse seems as odd as saying that “Raising Arizona” is an examination of the issue of child abduction.