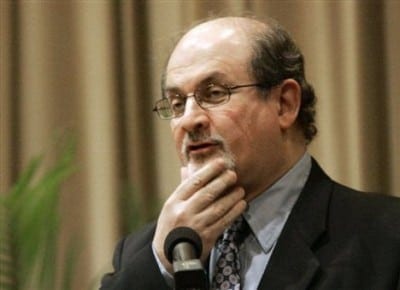 Rushdie will introduce the two final films in his series of great movies from great novels. On March 14: “Contempt” (1963), Jean-Luc Goddard’s adaptation of a novel by Alberto Moravia. On March 21: “Lolita” (1962), Stanley Kubrick’s adaptation of Vladimir Nabokov’s novel. Both at 7:30 p.m. in White Hall, Room 208. Free.

British-Indian author Salman Rushdie’s current stint at Emory University includes teaching a class on film and literature that students vied fiercely to get into, presenting a series he curated of the best book adaptations into movies, and generally spreading his aura of worldliness and intellectual glamour around campus. But this year is feared to be Rushdie’s last as Distinguished Writer in Residence.

As the conclusion of the five-year appointment, which required him to spend a month each year in Atlanta, draws near, one can sense a general nervousness among Emory officials, who deferentially address the renowned and knighted author as “Sir Salman.” Rushdie, who seems to take the university’s eagerness to please as his due, described the relationship during a recent Emory appearance as “quite an old marriage.” Given his history with that institution, the remark is not comforting. Will Rushdie renew his association with Emory or not?

The answer seems to hang on a single word: memoir.

Last fall, Random House announced that it had acquired international rights to Rushdie’s upcoming memoirs, expected to be published in 2012. The publishing industry is anticipating a blockbuster. Though Rushdie declined to discuss its contents on Sunday, reports suggest that the memoir will center on the decade he spent in hiding after Iran’s Ayatollah Khomeini issued a fatwa — a death sentence — against him in 1989 for his novel “The Satanic Verses.” The fatwa required British police to protect Rushdie for nine years and cost his Japanese translator his life.

To write the memoir, Rushdie requires his old papers, diaries and notes, which are under lock and key at Emory, part of the vast archive of printed and digital material he deposited with the university’s Manuscript, Archive and Rare Book Library to much fanfare in 2007. Emory archivists spent nearly three years organizing the jumble of papers, hard drives, “sticky notes,” photographs and more that Rushdie said he had simply thrown into countless boxes and handed over.

“The stuff is photocopied and chronologically arranged,” marveled the dapper figure in a dark suit and burgundy socks, leaning back in his armchair during the talk. “Now every piece of paper has a bar code on it and I just have to say, ‘Can you send me this?’ and there it is.”

Rushdie appears deeply grateful to be able to order up research materials like a room service meal at a five-star hotel. If not for the university’s painstaking endeavor to set his life’s papers in order, he readily conceded, “I could not have written the memoir at all.”

To be able to write about the events he is chronicling, Rushdie said, he needed distance from them. Time has helped him to see things more clearly. But the challenge in telling a story he’s already lived through is to decide how to tell it. In Rushdie’s view, the best autobiographies — such as Dave Eggers’ “A Heartbreaking Work of Staggering Genius” and Mary Karr’s memoirs — use novelistic techniques. Re-created dialogue, for example, is a fictional device offered in the service of truth. “What you have to do is make people come to life,” he declared, “including the person bearing your own name.”

With great relish and conviction, Rushdie announced that the memoirist must be “ruthlessly honest” about himself. “You have to face what you did and why you did it, and then you have to admit it in public.”

But when asked by an audience member if that means he now regrets writing “The Satanic Verses,” Rushdie turned defensive and immediately dismissed the man: “No, that’s not what I meant about being ruthless about yourself. No.”

While Emory insiders hope Rushdie’s need for his archives will keep him around, he grumbled mildly about being “stuck here” in Atlanta instead of on the set watching the filming of “Midnight’s Children” by director Deepa Mehta. Quickly, he tried to retract any hint of discontent with the institution that houses his papers, insisting that if you don’t have a specific job to do on a movie set, it’s a very tedious place to be.

His relationship with the filmmaker is unusually close, Rushdie said, extending to his even being consulted about the costumes. Rushdie is also one of the rare novelists who has written a screenplay for his own book. The effort of whittling more than 400 pages down to a 139-page script, he said, was akin to “cutting off both arms and both legs.… I had to stop thinking of it as an adaption of ‘Midnight’s Children’ and start thinking of it as a film I am making.”

Late last month, Rushdie introduced Satyajit Ray’s “Pather Panchali,” the first in his film series, by saying, “When I’m asked what I think is the greatest film ever made, I think it’s this.” The movie, a lyrical and moving story about an impoverished family in the Bengali countryside, was Ray’s debut and the first part of a trilogy based on a novel by a writer whose name, Rushdie declared, only he and another Indian professor in the hall can pronounce. Then he tossed out the name like the kind of punchline he delights in delivering at public forums: Bibhutibhushan Bandopadhyay.

Rushdie’s banter is a charming mixture of wit and erudition. If the humor doesn’t sink into sophomoric jokiness — as it did during a symposium on love last year delivered with his close friend and fellow author Christopher Hitchens — you are easily seduced. Most seductive is Rushdie’s effortless ability to spin a comedy out of reality. Speaking of Ray, he described his experience watching the legendary Indian filmmaker direct one of his last movies, “Home and the World.” The entire crew had to travel eight hours over rutted tracks into the Bengali countryside to shoot in an old, rotting landowner’s house like the kind Ray favored as settings for his movies.

Ray would tell the actors where they should stand in the room, Rushdie recalled, and then jump from spot to spot, acting out each person’s part and then telling the actors, “Do it like that!” Apparently delighted by the chuckle from the audience, Rushdie couldn’t help giggling and polishing the anecdote a little more, now adding that Ray would “leap frantically from spot to spot, performing the film. And he was over six feet tall, which is a giant in Bengal. He’d literally tower over everyone.”

At a later conversation on truth and memory, Rushdie said that memoirs should not be used to settle scores. But it seems impossible, if you’ve ever seen him preen in front of an audience, that he won’t use his nimble wit to portray others in such a way that he strides across the page as a colossus among them.