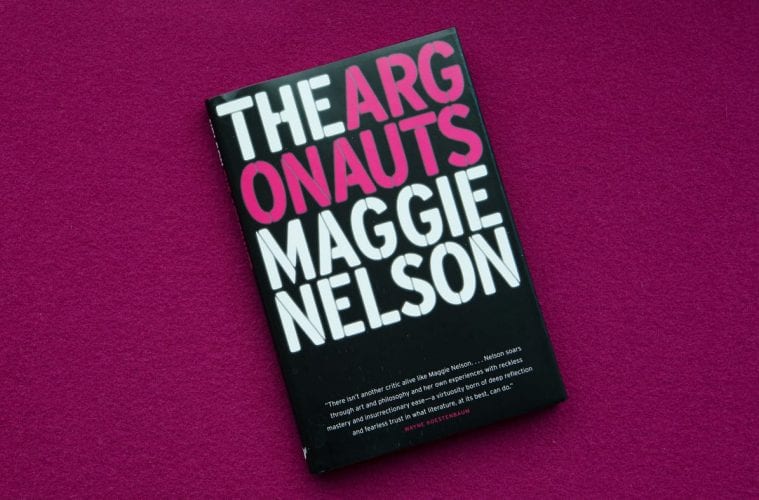 Review: Learning to want it both ways in Maggie Nelson’s genre-fluid “The Argonauts”

Generous is a word that circulates and frames so many descriptions of Maggie Nelson’s The Argonauts, a genre-fluid memoir that was recently awarded the 2015 National Book Critics Circle Award for Criticism. The book’s cultural and personal backdrops show a society beginning to rethink the terms of gender and sexuality, but also a society still reinforcing a violent status quo on desire, love and the terms of the body. Following the story of Nelson’s relationship with the artist Harry Dodge as he and Nelson form a family — while Dodge takes testosterone injections and undergoes a double mastectomy, and while Nelson becomes pregnant with her their son Iggy — The Argonauts asks us to loosen and undo the binary thinking that limits our experiences of one another. At turns humorous and devastating, and laced with citations from a litany of writers that seamlessly enter the text, The Argonauts is as fantastic as you’ve heard it is: “Generative and generous,” “Generous and intimate,” “What a dazzlingly generous, gloriously unpredictable book!” Ecstatically, I fall in line. But as I read and reread The Argonauts, what generosity feels like isn’t only a capaciousness of thought. Neither is it only the way that Nelson threads cultural theory into narrative and pleasure or the way the book’s opening of queerness, family and love lends itself to so many audiences. Defining via opposition, as I am here, it starts to look like words don’t have enough in them, that they’re inadequate. However, by insisting that words do not fail, that there is always, somehow, enough thriving space in them to allow us to be together in this world – that is where The Argonauts becomes generous. That Nelson also lets words fail, of course, minus any tired clichés is what makes this book so expansive. To be generous is not radical. It is necessary.

For Nelson, loving someone, insisting on that love, requires this constant and casually radical offer for things to be “both/and” and never “either/or.” There needs to space to feel through what look like contradictions. It is not easy, and shouldn’t be. For example, when Nelson describes how anti-LGBTQ legislation obstructs her and Dodge’s attempt to get married in California, Nelson undergirds it by acknowledging that legally sanctioned marriage, like the ability to join the military, is by no means a blessing for all individuals in the LGBTQ community. For some, though, it clearly is. The examples proliferate throughout the book, generative and challenging and unresolved. “How to explain, in a culture frantic for resolution, that sometimes the shit stays messy?” Nelson asks. “How to explain that for some, or for some at some times, this irresolution is OK–desirable, even…whereas for others, or for others at some times, it stays a source of conflict or grief?” These questions are central to The Argonauts and similar to the works of Anne Carson, Kate Zambreno, Claudia Rankine, Bhanu Kapil, Lisa Robertson, Clarice Lispector, Virginia Woolf and Bernadette Mayer, they open readers to a world of other possibilities. As Nelson writes, “There is so much to be learned from wanting something both ways.” This is not asking for too much, nor should it ever be. The rhetoric of taking a position, of taking sides, does not survive The Argonauts, and rightly so. Of all these “positions,” the positions of patriarchal power are thoroughly undone in the book. The revelations that come out of these moments are necessary. Again, this is not asking for too much. Always renewed along with Nelson and her family, the reader joins them in a landscape of permeable, fluid and specific correspondences (not allegiances) that generate all sorts of mutual pleasures and challenges. Nelson’s formal presence, the way she arranges sources to allow for both contingency and irreverence, continues to be one of the most vital voices in contemporary literature, organizing us all towards a spacious future. Like the poet Alice Notley, whom Nelson cites in The Argonauts, Nelson has become a medium for those sources and voices that constituent new, transformative and necessary thought. As Notley writes at the end of her poem “Jack Would Speak Through the Imperfect Medium of Alice,” “poor sweet categorizers / Listen / Every me I was & wrote / were only & all (gently) / That one perfect word,” The Argonauts tenderly and irreducibly swerves away from categorization into lush, incredible desire.