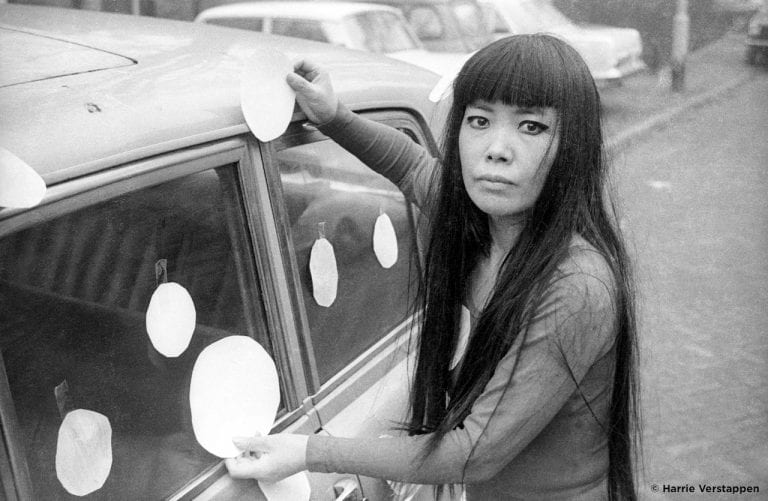 Kusama arrived in New York City in 1958 determined to make an impact and break down barriers for female artists. (Photo by Harrie Verstappin/courtesy Magnolia Pictures)

Review: “Kusama: Infinity” focuses on the art more than on the artist, and that’s just fine

As eye-poppingly colorful as her paintings, with her red curtain of hair and polka-dot couture, when Yayoi Kusama shuffles from the mental hospital where she voluntarily lives to her nearby studio, the octogenarian looks like an elderly anime character in the flesh.

For those planning to attend the High Museum of Art’s exhibition Yayoi Kusama — Infinity Mirrors (November 18–February 17) Heather Lenz’s documentary Kusama: Infinity (coproduced by Atlanta’s Karen Johnson) is a decent primer on the artist. But while it fills your eyes with her extremely diverse artwork — watercolors, sculptures, seemingly endless halls of mirrored lighting and oceans of canvas teeming with, yes, polka dots — the film never compellingly explains what makes the artist tick.

Maybe that’s impossible, given that Kusama, who speaks little during the course of the film’s short running time, is given to saying things like, “I convert the energy of light into dots in the universe. . . . That energy, along with love, flies into the sky.”

Well, whatever that means, her stuff is pretty.

Kusama’s status as the world’s most successful female artist can be ascribed, to some extent, to her prolific output and a grinding work ethic. She outlasted a lot of people. And she dug in, hard, leaving behind a traditional, affluent life in Japan to try to make her way as an artist in the states.

It’s touching to learn that, inspired by the paintings of Georgia O’Keeffe, as a young woman, she wrote a letter to the older artist, asking for help in navigating the professional art world: “Will you kindly show me the way to approach this life?” O’Keeffe’s response was, basically, you’re on your own, kid — though she did give Kusama some leads on possible places to show her work.

The best parts of Infinity remind us that, when she traveled from Japan to New York City in 1958, women were considered third-class citizens in the art world. Their work might be included in group shows, but solo exhibitions were exclusively the domain of men — which is why Kusama apparently pitched herself as hard as she could against obstacles, courting possible patrons and doing whatever it took to get noticed. “She was blatant and aggressive and overt,” one contemporary notes.

When she finally began getting her work seen, Infinity convincingly shows that the more established, richer male artists weren’t hesitant about stealing her ideas. When Kusama focused on soft sculpture, suddenly it was Claes Oldenburg’s new medium. Same for Andy Warhol, who quietly swiped Kusama’s idea to replicate a single photographic image all around her gallery space.

For someone averse to sex (she platonically dated older artist Joseph Cornell, who shared her distaste for the deed), it’s ironic that Kusama became most famous in the sixties as the organizer of public happenings, with celebrants whirling around naked in New York. The nudity was meant to be alternately about beauty and innocence, or in protest against the Vietnam war. But of course that’s not how prudish Americans and Japanese viewed them. A younger man who worked to rehabilitate her career after mental illness led her to return to Japan in the 1970s recalls that before he met Kusama, in her homeland she was “famous as a scandal queen.”

The artist’s second wind came when she returned to Japan, entered the mental hospital where she still spends her nights and simply continued to do what she had always done — create, create, create. Often, in the mythologizing of famous figures like Vincent van Gogh, their art is defined and minimized as the output of their mental illness. Luckily, Infinity does not try to make that fraudulent sort of equation.

Most of the film’s talking heads are art-world insiders, like Guggenheim Museum curator Alexandra Munroe and Tate Modern director Frances Morris. Their commentary is appreciative but not enlightening, and mainly seems designed to bolster Kusama’s portfolio and its value to museums and galleries. There’s not a lot of personal insight here about the artist — from her or from credible intimates. (One fellow named Akira, for instance, claims to be Kusama’s best friend, but the movie doesn’t clearly substantiate the friendship.) What Kusama: Infinity instead offers is a grand if glancing overview of the scope of her artwork. And that is, literally, plenty.