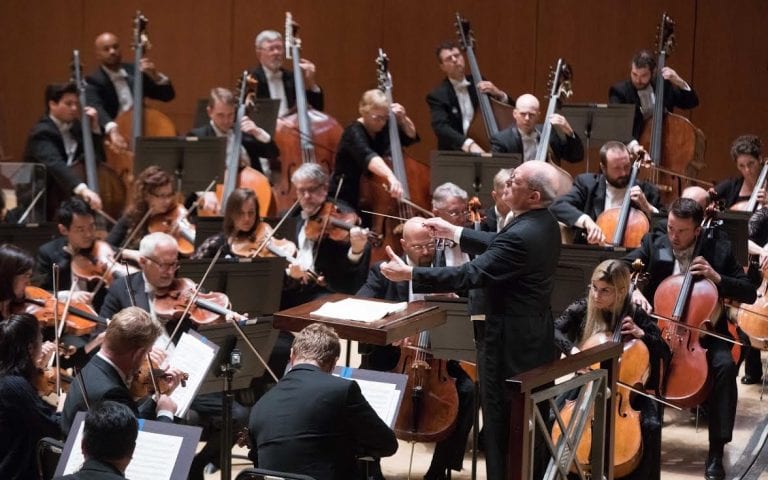 The Atlanta Symphony Orchestra opened its 2018–19 season on Thursday at Symphony Hall featuring a pair of familiar, towering pillars of late Romantic repertoire, Sergei Rachmaninoff’s Piano Concerto No. 2 and Pyotr Ilyich Tchaikovsky’s Symphony No. 5. Music director Robert Spano led the orchestra, with guest pianist Kirill Gerstein as featured soloist. The ASO repeats the program tonight at Hodgson Hall in Athens, then again on Saturday evening and Sunday afternoon back at Symphony Hall.

The celebratory energy was palpable from the very first notes of a boldly enthusiastic rendition of “The Star Spangled Banner,” which is the traditional symbolic opening of each new season, with the audience standing to sing along. This time, it felt especially vigorous and engaged, not waded through as a rote formality, and that was a good first omen for the rest of the concert.

An American citizen based in Berlin, Kirill Gerstein last performed in Atlanta in late January in a brilliant recital at Spivey Hall, which inaugurated their new “Robert” Steinway piano. His last performance with the ASO was in January 2017, when he soloed in Tchaikovsky’s Piano Concerto No. 1 with Donald Runnicles conducting.

As with that Tchaikovsky concerto, Gerstein proved an excellent choice for Rachmaninoff’s deeply emotive and big-handed Piano Concerto No. 2, with plenty of sparkle in the treble end of the keyboard. Spano’s bold and dramatic shaping of orchestral phrases, especially in the opening movement, pulled on the melodies like taffy and wrung a juiciness from them and the overall texture that kept the performance from being ordinary and predictable.

For an encore, Spano joined Gerstein at the piano for a delightful four-hand piano piece, Rachmaninoff’s “Waltz,” Op. 11, No. 4, which, while also Rachmaninoff, felt like a fun contrast that allowed Spano to step off the podium for a more intimate one-on-one music-making with Gerstein.

After intermission, ASO violinist Juan Ramirez was presented the 2018 Ford Musician Award for Excellence in Community Service by the League of American Orchestras and Ford. The award was for Ramirez’s outreach work to the Latino community.

Tchaikovsky’s Symphony No. 5, certainly no less a familiar box office hit than the Rachmaninoff, was a good choice to balance the concert’s second half with the first, a slightly leaner but longer work that kept the lushly romantic temperament of the program in play in a tightly executed, thrilling rendition. Among the elements that featured specific orchestra members, most notable was the long, prominent horn solo in the second movement, exquisitely played by principal horn Brice Andrus.

Shortly after this week’s ASO concerts are over, Spano will head to New York City to rehearse then lead the Metropolitan Opera in seven performances of Marnie by Nico Muhly between October 19 and November 10, after which he will return to Atlanta to conduct the ASO in music of Tchaikovsky and Christopher Theofanidis on November 15.

A couple of other brief notes of visual changes at Symphony Hall: First, instead of two projection screens in front of the proscenium on either side, a single screen that can raise and lower near the back of the orchestra was used for projections. Another interesting item was a graphic listening guide for Tchaikovsky’s Symphony No. 5 inserted into the program. While I personally prefer reading verbal notes in advance, or just listening when it comes to such familiar repertoire, there were a couple of young adults seated next to me who were actively using the guide during the work, and perhaps that is the demographic to whom the symbol-filled graphic guide is addressed.

On another visual note, you must check out the new gallery of photos of ASO musicians inside the hall, fresh and splendidly vivid new portraits made this year by photographer Jeff Roffman. They’re a great way to learn to recognize all the players on the team. Among the ranks this season are four new faces: horn players Kimberly Gilman and Chelsea McFarland, trumpeter Mark Maliniak and trombonist Jason Patrick Robins, with McFarland and Robins present on one-year appointments.