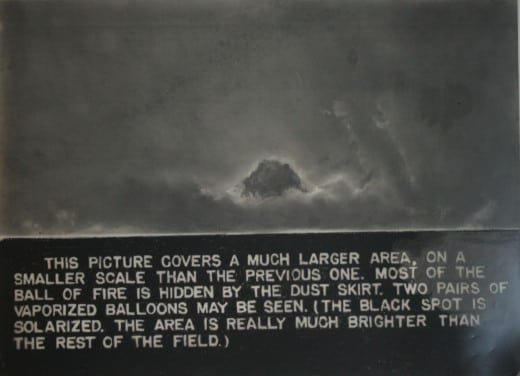 About three weeks ago, NASA announced that its Voyager 1 spacecraft had entered interstellar space, achieving the farthest reach of any object ever made by human hands, drifting about 12 billion miles from the sun. Around the same time, here on Earth, artist Jason Kofke was finalizing his most recent solo exhibition, dubbed “EVERYTHINGALLTOGETHERALLATONCE,” on view at Beep Beep Gallery through October 19.

The show, primarily a collection of drawings and prints, ruminates on scientific efforts to encapsulate the entirety of human understanding in a single theory or expression. The “Golden Record” launched with Voyager 1 in 1977, Dmitri Mendeleev’s periodic table and contemporary physicist Garrett Lisi‘s “theory of everything” are prime examples.

An old-school (and killer) draftsman, printmaker and appropriator of scientific memorabilia, Kofke is drawn to anything that nods to the pre-digital age. Nostalgic for analog and other bygone technologies, he can’t seem to help himself when it comes to imagery of vintage spacecraft, World War II fighter jets and outmoded television sets. Pretty girls are a favorite too, whom he manages to wrangle into his geeked-out repertoire. Geek never looked so good. 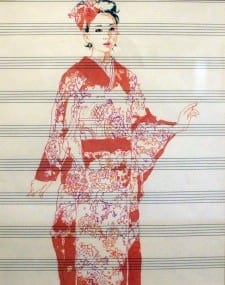 In the current exhibition, Kofke, a 2011 Artadia awardee, plugs his favored imagery into his new, broader theme. But, even though he addresses a bigger picture — the biggest picture possible, literally everything under the sun and more — he does not offer much more than what we’ve seen from him already, including a few repeats. In fact, some of these works feel quite thin and underdeveloped. Lo-fi should not be confused with unfinished.

The pieces that make reference to the new theme are not among the strongest works in the show, though they offer a conceptual backdrop. Rather, the highlights exist in the margins. The twin charcoal drawings “Nuclear Age (Positive)” and “Nuclear Age (Negative)” unveil in velvety black the horrifying luster of atomic bomb mushroom clouds. Here, “everything” seems to point to the potential of nuclear warfare to destroy all things.

A modest etching of Neil Armstrong presents a very humanized perspective of such macrocosmic science, especially given the obsessive nature of Kofke’s hand. The same is true for the artist’s portrait of Mendeleev, executed in silverpoint, a medium (literally silver) first used by medieval scribes and later by Jan Van Eyck, Albrecht Durer, Raphael and other masters.

A lover of graph paper, Kofke seems to want to explain all things through gridded pseudo-mathematical calculations. Even his geisha girls — arguably the outliers in this exhibit — are included in this theory of all things, their womanly appeal superimposed on a chart as if such a quantifiable explanation of their beauty existed. Here Kofke’s seductive hand is most present.

Punctuating the exhibition is a characteristic installation of vintage TV sets that show live video footage of the gallery. Not as much about the issue of surveillance as the process of looking itself, this video installation, which encompasses the universe of the gallery, makes for an aesthetic parallel to the larger theme: through the video monitors, one can view everything “all at once.”

For a show of such cosmic implications, Kofke’s minimalist approach feels counterintuitive to the magnitude of his overarching theme. The show ultimately works and holds together, but it doesn’t have the oomph! or kapow! that one might assume from an exhibition so ambitiously titled.

Kofke’s special ability to capture monolithic narratives of human history in a single well-rendered drawing or object was more apparent in his seductive and electrifying 2012 show “The Ends,” also at Beep Beep. A collaboration with Chris Chambers, it featured an actual 1984 Pontiac Fiero in the center of the small gallery. A cheeky act of reverence for the ’80s, the car also summarized American efforts (namely General Motors’) to make a more fuel-efficient but sporty car.

Notwithstanding the disappointments of his current show, Kofke is among Atlanta’s most talented artists. Like NASA’s space probes, he has demonstrated that he is one to push for the outer limits. A frequenter of international artist residencies — China, Russia, Japan, France (just take a gander at the travelogue on his website) — he is not tethered to his own experience, locale or perspective. I’m eager to see what’s next.