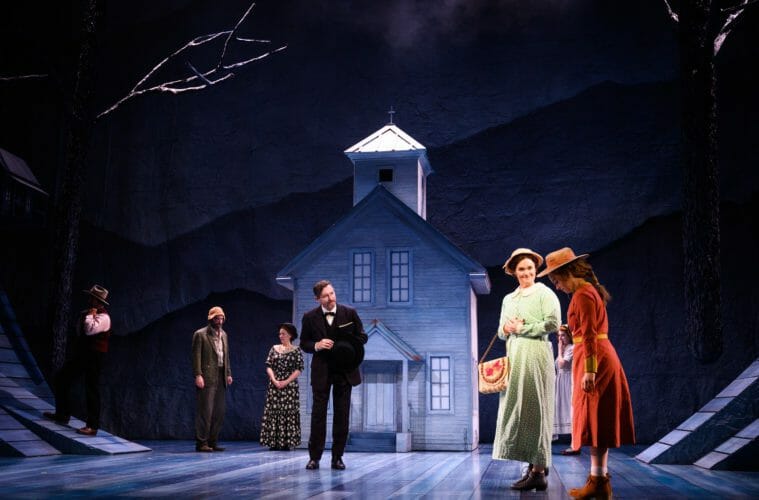 Review: It’s a mystery how “Darlin’ Cory,” for all its good parts, doesn’t quite jell

Though many of the elements of Darlin’ Cory, the new musical  opening the Alliance Theatre’s 2021–22 season, are dazzling, the clumsy delivery of the show’s central mystery hampers its overall success. Musical mystery-thriller is a difficult genre to tackle, as complicated as a tightrope walk, and poor Cory stumbles and falls before it reaches the end of the line.

The Tennessee-tinged music from composer Kristian Bush is fantastic. The set from Tony Award winner Todd Rosenthal is incredible, evoking granite mountain passes and old dollhouses. The performances are very good. But the mystery at the heart of the show — which shows promise in a stunningly dark, twisted opening scene — is mind-boggling in its delivery. 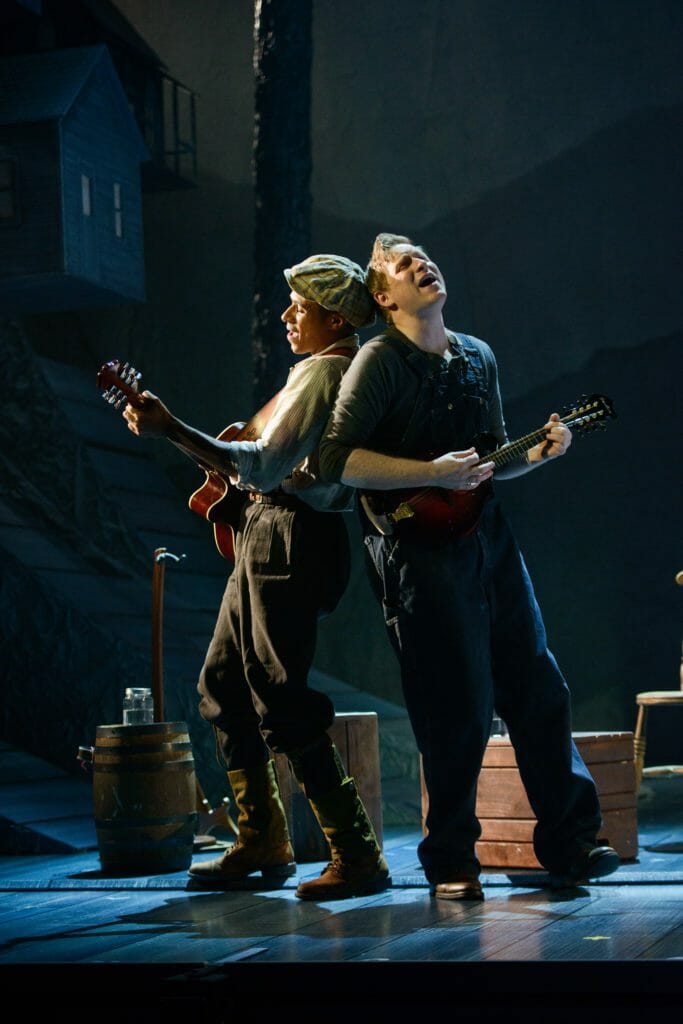 Jimez Alexander and John Bobek are among the players in “Darlin’ Cory.”

If only the substance matched the spectacle, Darlin’ Cory, which continues through October 3, would be a keeper. Instead, the parts — as directed by Susan Booth — don’t add up to a satisfying whole.

Darlin’ Cory is set in an isolated mountain town filled with secrets, where a young woman named Clara, played by Gillian Rabin, makes moonshine and strives for a liberated independence. The town is run by a dictatorial minister named Bailey (Jeremy Aggers), who doesn’t believe that women — even his wife and daughter — should read, speak or think. Bailey and Clara inevitably collide, leading to her banishment from the church and other tragedies. And then, a mysterious stranger comes to town to try and set things right.

There, that makes the plot sound sane. But it is not.

The plot also involves a mysterious hunter trying to gun down a mother and baby. There are a pair of weird sisters who talk to the audience, talk to rocks, talk to trees and know everyone’s secrets. There’s a terrorist plan to dynamite a new road, secret paternity reveals, clandestine reading lessons and other wild twists.

The cast members deserve much praise for trying their damnedest to make Darlin’ Cory work.

Aggers is an accomplished musician and fine actor, portraying Bailey as a man with a polite veneer but antiquated ideas about women. His song “The Way It Is” is a catchy delight, even if its sexist philosophy is completely backward.

Rabin’s range as an actor is as impressive as her vocal range, delivering songs in both high and low register. As her character transforms over the course of the play, Rabin delivers very impressive work. Her song “I Want a Blue Sky” is a lovely expression of where her hero’s journey might lead. 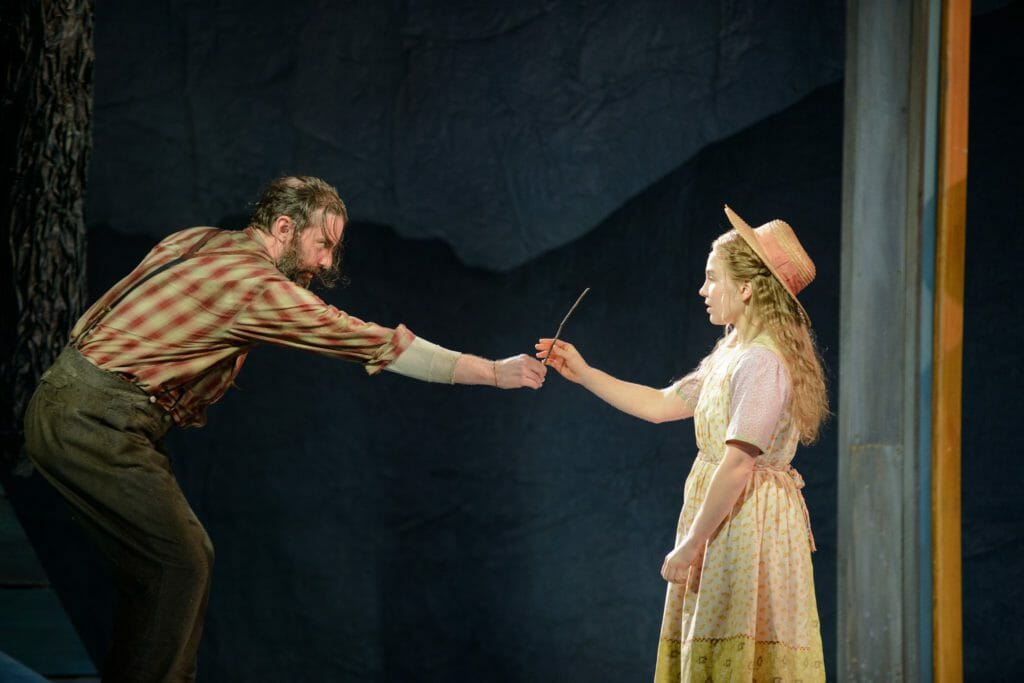 Even actresses Jewl Carney and Maria Rodriguez-Sager, portraying the two most improbable and bizarre characters in the whole enterprise, provide amusing, attention-grabbing performances as Alex and Cass Crow.

Their ever-changing purpose within the show highlights its biggest flaw.

The problem lies with how the central mystery from writer Phillip DePoy is executed. The murder mystery reveals too little in the beginning, then way too much at the ending. Its secrets are not dealt out in a fair, consistent manner. The audience has no time to process the information.

The central mystery has too few suspects and not enough clues. There are threats of using dynamite on the new road to town, but that plot point is just dropped. The first act gives the audience hints of twists, but not the characters. 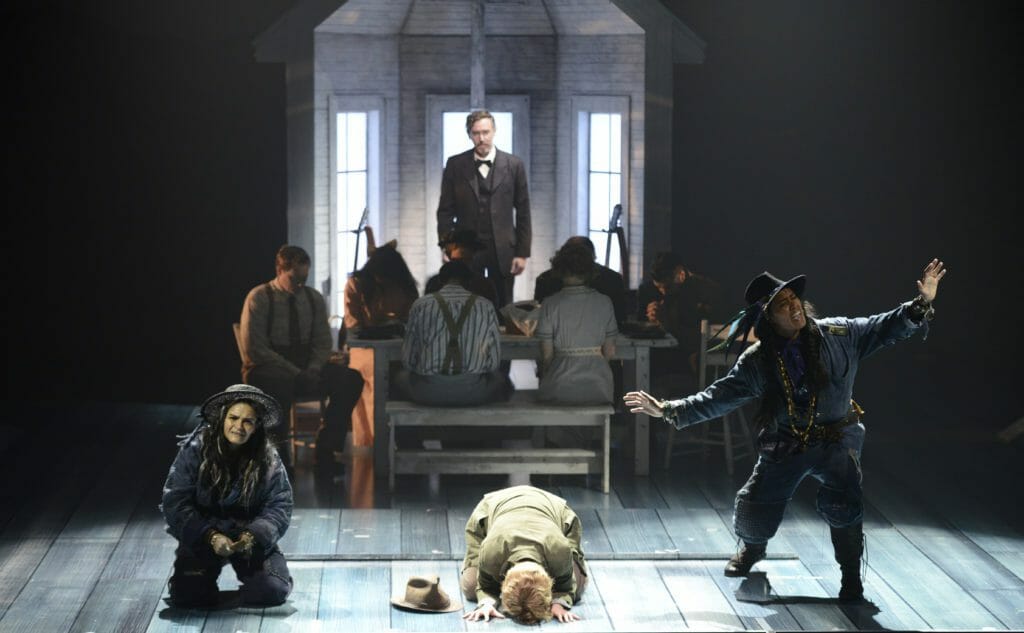 It’s difficult to decipher which characters know what and when. Clara, in particular, is kept in the dark about too many things during the first act. There are facts the character needs to know about her past to move the story forward, yet she is never told the truth at a time when it would make sense to reveal it.

Instead, there’s a startling amount of information parsed out at Darlin’ Cory’s climax, the sort of exposition dump that gives the audience whiplash.

Mysteries should be handled delicately. This one is not. The whole story devolves into chaos.

It’s a shame. There’s a lot of cool stuff to look at onstage, particularly as a cloud of smoke rises over a miniature mountain town into the rafters. But the last beat of your story should not leave your audience puzzling, “Wait, whaaaaaat?”