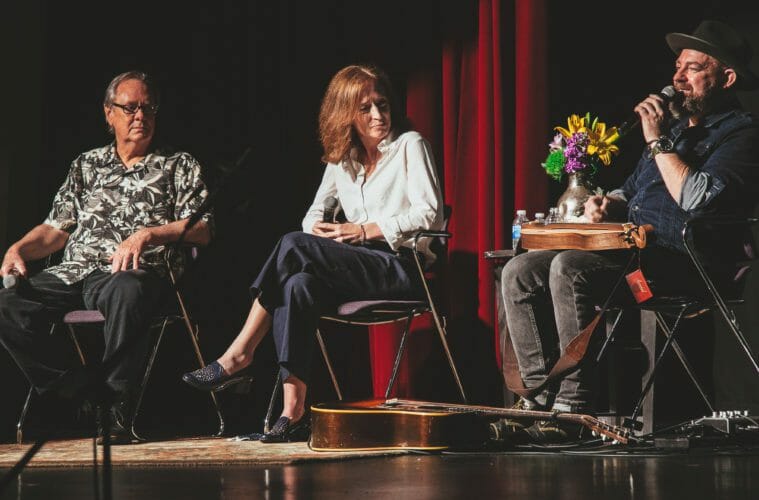 The curvy wood trimmings of the Alliance Theatre’s stunning new Coca-Cola Stage had barely settled into place before the Covid-19 pandemic shuttered the Woodruff Arts Center. On September 8, the Alliance is poised to return with Darlin’ Cory, a world premiere musical by Atlanta author-playwright Phillip DePoy and Grammy award-winning singer-songwriter Kristian Bush of Sugarland fame.

Set in 1920s Appalachia, Darlin’ Cory weaves a tale of an ambitious young woman who comes to clash with a dictatorial town preacher. Things get interesting when a mysterious stranger shows up selling moonshine. DePoy’s script draws from local legends, as well as Bush’s own boyhood in Sevierville, Tennessee — “just to put some weird in,” Bush quips.

ArtsATL caught up with the musical’s creators during the final week of rehearsals.

ArtsATL: How did this project come to be? 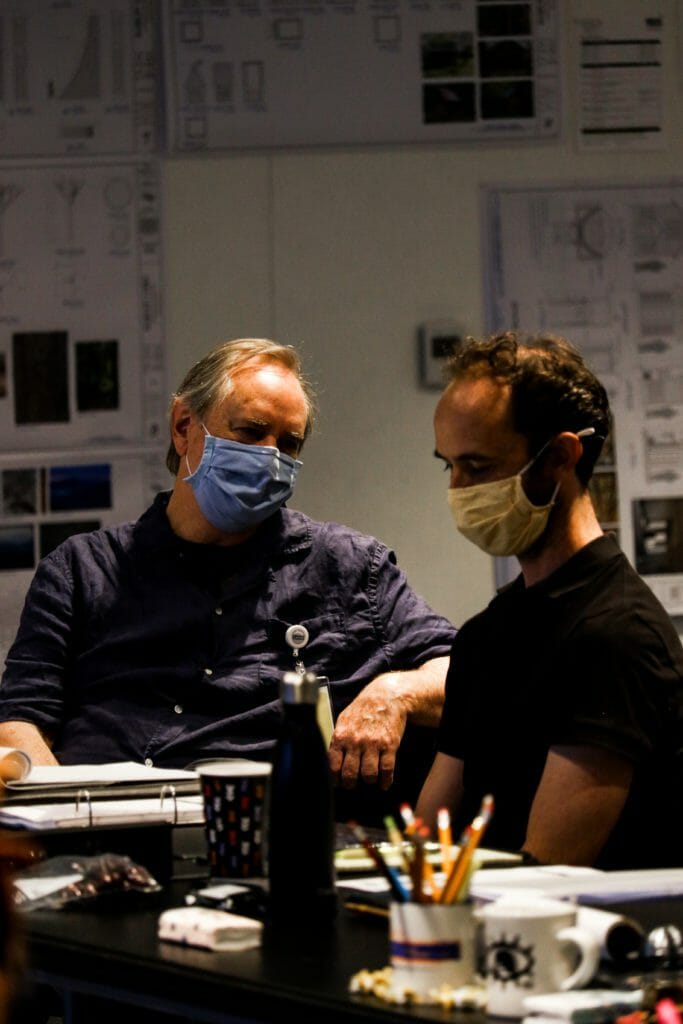 DePoy: It started a very long time ago with a folklore class I was taking at Georgia State. I went to North Georgia to interview a chairmaker. He started singing “Darlin’ Cory,” which is a true Appalachian folk song. He said his mother wrote it. I knew that wasn’t true because the song is 200 years old. But then he told me a story about a woman who made moonshine and used the profits to buy books for little girls who ordinarily wouldn’t have access to them.

I kept thinking that would be an interesting play. I pitched the story to Susan [V. Booth, Alliance Theatre artistic director and this production’s director]. She liked it and mentioned it to Kristian. So, the three of us sat around the table and talked about expanding the idea.

Bush: Susan and I had worked together. She had hired me to put a song or two into Janece Shaffer’s play Troubadour [a contribution that quickly expanded]. Susan knew what kind of collaborator I was. I will jump into the water with you no matter what as long as I find it interesting. She called me in and said, “I’d like you to meet Phillip DePoy.” This was in the middle of all the politics in America changing. They wanted to write a piece that focused on the importance of education for women. I thought, geez, count me in, because I am the one dude who speaks for ladies in country music. I looked at Susan and said, “What do you need?”

Context is interesting here. I’m from Sevierville, and I got shipped away to a boarding school when I was a kid. I realized there how much people stereotype Appalachia. I think that’s where you start this conversation. I said, “If we’re going to tell this story, let’s tell it legitimately as people [who are stereotyped] are up there. Let’s use this as a plate to serve up humanity back to these people.”

I know how to make music from up there because I’m from there. I’ve spent years learning how to craft songs to do a specific thing across radio dials. That’s a skill I am bringing to this; I am just shoving it through the filter of an Appalachian mountain dulcimer.

ArtsATL: Phillip, you have experimented with filtering myth through Appalachian settings before. Is that at play here?

DePoy: You hit the nail on the head. This is Greek mythology, the myth of Cassandra, and Joseph Campbell’s archetypal hero’s journey. The hero is called to challenge something, and in taking up that task and coming to fruition with it, the hero himself or herself comes to a place of self-actualization. So, in this play, aside from being in an Appalachian small town, we are also Ulysses, Theseus, or Oedipus. These mythological themes repeat over and over again in every culture and time. … But this is also a real, no-kidding musical. It is very splashy and will be a splashy way to come back to the theater in Atlanta, I think.

ArtsATL: Kristian, how did you create the sound world of “Darlin’ Cory”? 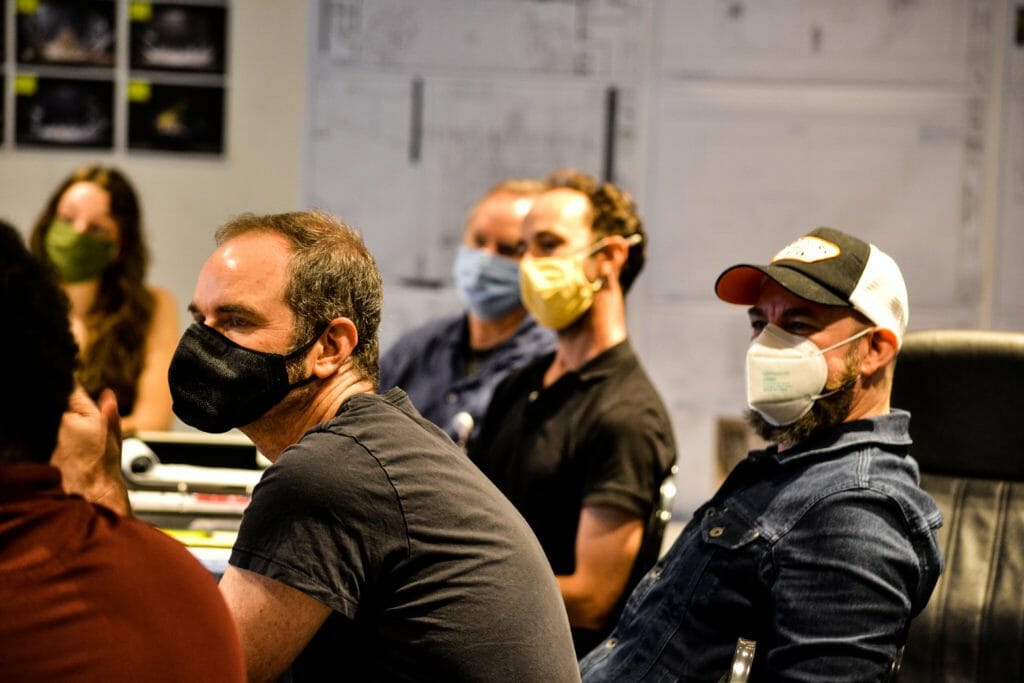 Bush: I wrote a lot of the music immediately after that first meeting. When I work with an artist, I will ask what excites them; when was the last time you got your heart broken; tell me what your story is and how it got you where you are now. Then I can reflect back whatever sounds interesting. I did that with Phillip and Susan.

It’s like making a double album. Song three is your single. The first song on the record needs to make you feel you must listen to the second. When you go to the second record, it’s got to start with an even more interesting song. There’s a weird thing with albums of popular music, the last song on the album is usually what points to the next place the artist is going. You feel your most authentic by the time you get there. The last song in this musical, “After the Ashes,” became the thing that defined it. There is a tragedy, a fire. I remember the anxiety of forest fires when I was a kid. After a forest fire you have ashes that kind of look like snow. That image stuck with me.

I was writing this all with a dulcimer. The mountain dulcimer is a very democratic instrument, a parlor instrument. I decided walls make good art, there are boundaries to everything. I made myself a rule that I could only write inside the melodies of a dulcimer, then decided I could sing against the dulcimer in a different way. I knew I wouldn’t have a drummer, so I decided to use stomps and claps. I used all this as my base. … The first four songs I [took] out were the first ones I put back in! The story has changed a few times, but these songs were like tent poles.

ArtsATL: Have you learned anything new about yourself or your music from this experience? 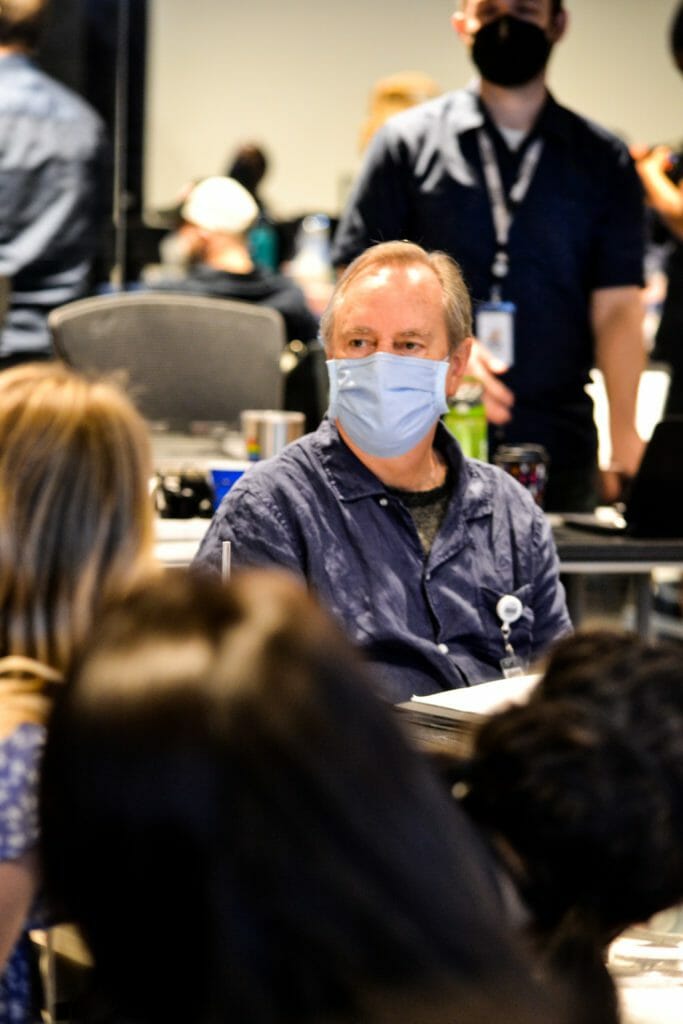 Phillip DePoy says that Black Lives Matters protests, Covid and the presidential election “couldn’t help but inform what we were doing, so the play became much more than its original concept.” (Photo by Kathleen Covington)

Bush: This is an opportunity I hadn’t ever imagined. The idea that this is even possible for me is flattering. Immediately after this my brother [music director Brandon Bush] and I head to Florida because the Gable Stage [in Coral Gables] has optioned my other musical [Me Before You, another collaboration with Janece Shaffer], which is about the Kavanaugh testimony.

I mean, we were supposed to be on stadium stages playing country music, and now we are on theater stages playing this. So as much as I have tried to convince myself that this is just a detour, I think it is a parallel highway. I am starting to understand that inspiration sometimes just means holding still rather than actively doing anything. And here is the super-personal thing I’ve learned: Don’t ever be afraid to put your personal into what you’re doing. Ever. Because when you do it gets more real, and that’s worth it.

ArtsATL: It sounds like you are having a good time here.

DePoy: I am really digging it. I am exhausted! But something new happens in the rehearsal room every day and that is exciting to me. We created this over the pandemic year. My [university] students and former students were in Black Lives Matter protests and getting beaten up. The horror of Covid raised its head and then, excuse me, we watched the American government fall apart. Those things couldn’t help but inform what we were doing, so the play became much more than its original concept. It is so satisfying to watch the preacher who runs this small town in the play be taken down. It is this moment’s contemporary events being reconciled onstage.

ArtsATL: So, what do you want your audience to experience and take away?

Bush: What’s outside our window right now is a little too real. We are so lit up, there’s all sorts of weird that makes talking directly about issues difficult. But we can talk about the issues of a fictional town because it feels like we can have an opinion without everything blowing up. What I hope people will take away is a chance to have a conversation that doesn’t blow up, so they can get a little further in the conversation.

Music is a weird magic. When you sing something, you give it a mystery that may have more emotion than just the words. So, the music in Darlin’ Cory … I am hoping that you will leave with the hope that we will get out of this pandemic. Not just as a body, but as a heart. It is scary right now to have hope. For a few minutes after you leave this, I would love for you to have an afterimage, even if only for a few minutes, that hope is possible.