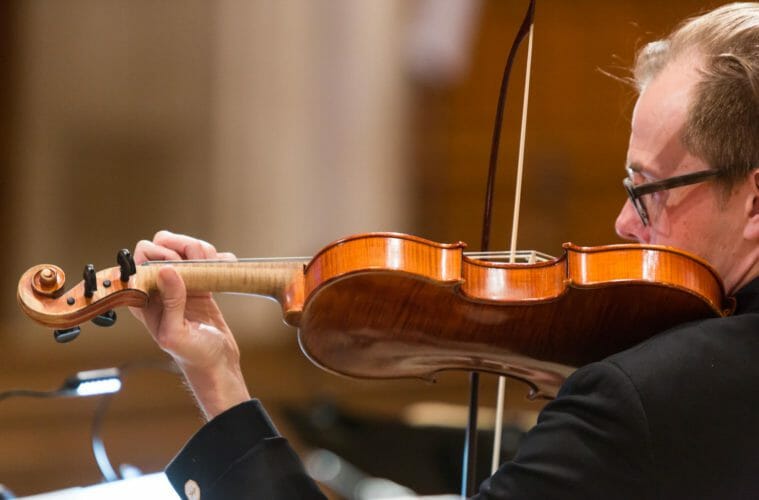 The orchestra, which performs with period instruments, returned to the stage over the weekend.

After going mostly dormant for Covid, the Atlanta Baroque Orchestra returned with its usual full ensemble Friday for a performance at the Cathedral of St. Philip in Buckhead. The program was centered around two guests: Rachel Niketopoulos and Christopher Caudill, horn players from the North Carolina Symphony.

For their day jobs, they play modern, valved French horns. With Atlanta Baroque, a period-instrument ensemble, the couple performed on so-called natural horns. As Caudill explained to the audience, playing an unvalved horn is basically blowing into a metal hose. You only get limited notes, making phrases and changing the pitch by adjusting how you hold your lips and how you shape your hand inside the instrument’s bell. It’s a highly imprecise technique. But early-music composers were enchanted by its glorious, mellow, squawking character. The horn rapidly evolved, soon becoming a central flavoring in orchestral music, like salt and pepper in cooking.

With two expert horn players on the bill, the program was horn heavy in the best way. The sinfonia from Baldassare Galuppi’s Old Testament oratorio “Jahel”  (1747) opened the evening, a jaunty little piece and a good warm-up for the guests, who were here simply members of the band. 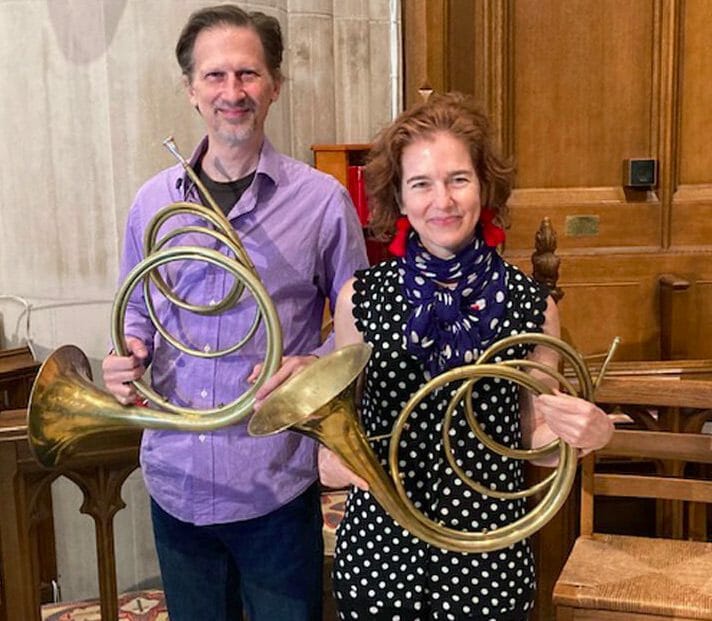 Christopher Caudill and Rachel Niketopoulos of the North Carolina Symphony with their valveless, period-piece horns

They were the stars for Georg Philipp Telemann’s Concerto for 2 Horns (listed in the composer’s catalog as TWV52:F3), a wonderfully mild showcase. Its lovely Siciliana, counted as six beats per measure, felt like a lullaby, the gentle rocking of a baby cradle or a Sicilian fisherman’s boat. Artistic director Julie Andrijeski led with vigor from the concertmaster position, violin in hand.

More effective was Johann David Heinichen’s short Concerto for 2 Horns (S.231). Here the composer spiced up the music with stark contrasts and a variety of instrumentation, such as the dialogue between two flutes and the horns in the middle movement, or the evocative call-and-response of hunting horns, as if signaling each other across the forest.

The two horn players rested for Telemann’s Overture in E minor (TWV55:e3). Like a lot of Telemann, this heftier work is also very mild, determined to remain in the background. The narrative is sensational on paper, with movement titles such as “The Cyclops,” where we are supposed to hear the monsters hammer thunderbolts for Zeus. But instead of metal and fire, Telemann has them stir overcooked spaghetti.

There was no intermission for this 80-minute concert, but the evening was clearly divided into two parts: the four opening pieces sounded like they were in black and white compared with the brilliantly supersaturated color of the final work, a suite of dances from Jean-Philippe Rameau’s opera Hippolyte et Aricie.

It’s a masterpiece of firsts: Rameau’s first opera (at age 50!); the first to break the stranglehold of composer Lully’s absolute dominance over French opera, which lasted several generations; the first piece to be described as “baroque” (as an insult, from the Portuguese word for a misshapen pearl, barroco). A gorgeously misshapen pearl isn’t inaccurate, and Hippolyte overflows with music, enough music for 10 operas. It explodes with hummable tunes and bold rhythms. Premiered in 1733, it still sounds among the most zesty and alive music of its era.

Violinist Andrijeski, who’s also a specialist in Baroque dance, kept the band tight, with the focus on the music’s physicality, its danceability. (There were no dancers or singers for this concert, but hopefully the orchestra will offer a complete Rameau opera-ballet in an upcoming season. It’s sure to be a highlight of Atlanta’s musical calendar.)

They played Andrijeski’s arrangement of the dances, based on a 1757 revival, each short dance movement gaining in emotional power. This was revolutionary stuff. The overture features a reedy, wheezy bassoon part (played beautifully by Anna Marsh), and it introduces a soundworld that, in part, defines French music, from Berlioz to Debussy and Boulez.

Andrijeski lowered her mask, picked up a mic, and gave us a brief summary of the action surrounding the dozen dance numbers. The March is slow and dreamy in the Temple of Diana. The rousing sailors’ dances invite the listener to picture choreography backed by such athletic, light-footed tunes. In the raucous “Deuxième Air des Matelots,” a grandmotherly woman seated near me started vigorously tapping her toe to the beat. Rameau’s music was coming across loud and clear.

The “Premiere Rigaudon,” a walk in the pleasure garden, sounds like a prequel to “Prelude to the Afternoon of a Faun.” The closing dances come from a scene in the opera as they prepare for the hunt, dancing to a group of rondeaux and menuets, music that induces euphoria.