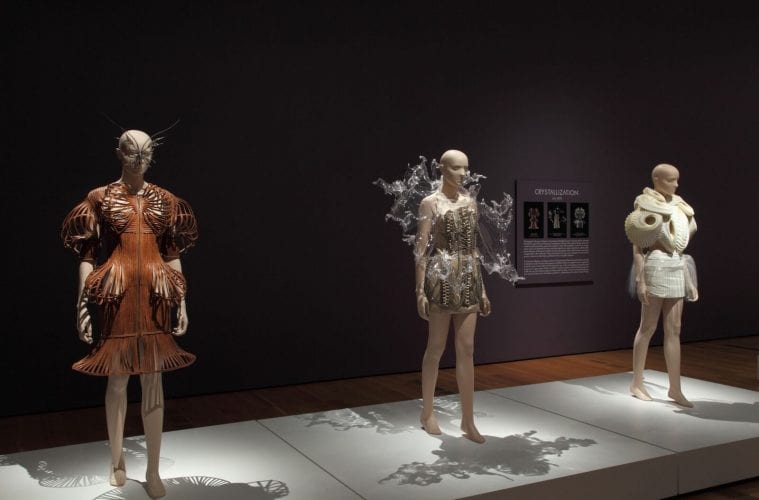 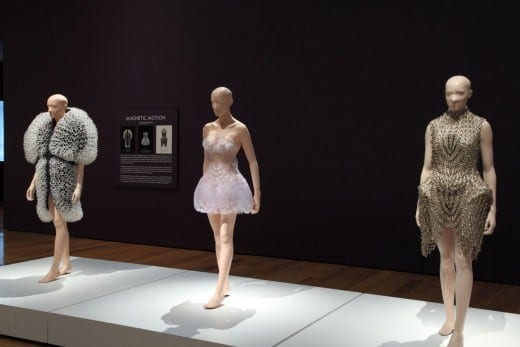 Iris van Herpen: Transforming Fashion, at the High Museum through May 15, demonstrates, spectacularly, that design and fashion are, in their most significant moments, about more than just looking good.

Although cutting-edge media stars like Lady Gaga and Björk are among her admirers and clients, her dramatic dresses are far more than vehicles of spectacle. Ever since her debut in 2007, the 31-year-old van Herpen has put design and technological innovation in the service of ideas. As with the late Alexander McQueen, with whom she interned at the beginning of her career, her fashions suggest major themes of human existence while never descending to the level of heavy-handed allegory.

As is abundantly clear in the Dutch designer’s first United States solo museum show (and the High’s first foray into fashion), curated by design curator Sarah Schleuning in collaboration with Netherlands’ Groninger Museum, her designs incorporate sculptural art and transfigure the boundaries of technological possibility.

Although she collaborates with architects and materials scientists to produce her designs, her vision sometimes perceives more than the scientists themselves regard as feasible. Such was the case with her 2015 Ice Dress, which was produced on a 3-D printer using transparent resin. 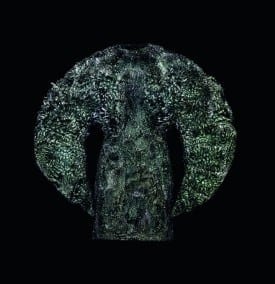 A comparison to poetic metaphor seems appropriate for the vast majority of her designs, from the most sculptural forms to the dresses designed for daytime wear. As with Magnetic Motion (dubbed Ice Dress), the elemental suggestions of flowing water or pock-mocked terrain evolve from ideas into compelling garb by way of technological solutions. For example, in Wilderness Embodied (nicknamed Moon Dress), she used a fabric embedded with iron filings and magnets, which attracted the filings, to create the surface texture.

The metaphors have been both poetic and sometimes disturbing, most notably in her 2011 Skeleton Dress (done in collaboration with architect Isaïe Bloch), a lyrical version of the body’s structure without even slightly echoing holiday costumes. Although the dress might seem an echo of McQueen’s dark sensibility, the inspiration for it was actually the sense of liberation and rebirth that van Herpen derives from skydiving.

This is fashion to be looked at and then thought about, preferably at great length. It transcends the mere “wow” factor by a supreme order of magnitude.

Of course, it’s the initial emotion of sheer amazement that lures us into the further thinking. The Biopiracy collection of 2014 asks, “Are we still the proprietors of our bodies?” and reinforced the question on the Fashion Week runway in Paris by introducing the models sealed in plastic sheeting like packaged meat, an effect created by Belgian artist Lawrence Malstaf. 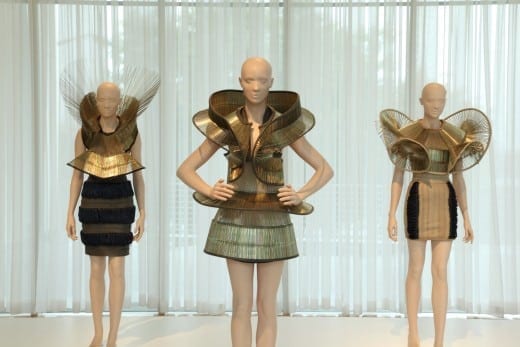 Nevertheless, thoughts about the originating topic of biological patents on our genetic underpinnings come after the visual impact of the astonishing designs that suggest cellular structures and strands of DNA. The remarkably varied garments exist as intrinsically beautiful patterns, not literal illustrations or embodiments of an idea. 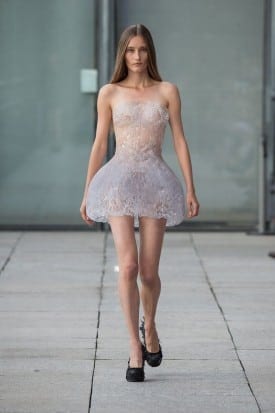 The fact that all of this grew out of an extended visit to the European Organization for Nuclear Research’s Large Hadron Collider near Geneva, Switzerland, with its superconducting magnets, is both central and superfluous. This body of work is overwhelming before we know anything about the backstory.

Fashion is tactile as well as visual, and the High gives visitors a chance to touch some of these creatively produced fabrics in a side gallery. Some of the most technologically innovative have a surprisingly sensuous texture, demonstrating anew that van Herpen is an artist of bodily adornment in a multiplicity of dimensions.