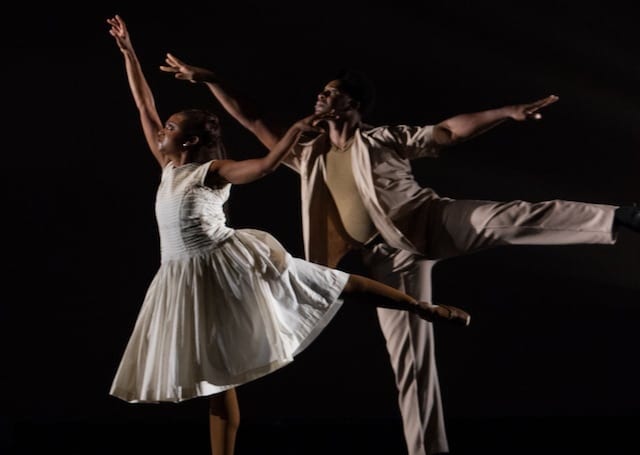 (Editor’s note: As East Point’s Ballethnic Dance Company celebrates its 25th year and prepares for its annual production of the Urban Nutcracker, Cynthia Bond Perry takes an in-depth look at the company and founders  Waverly Lucas and Nena Gilreath. Part 1 of this three-part series looks at how their partnership was forged over a dinner of steak and shrimp.)

Nena Gilreath glanced at Waverly Lucas across the room, and made a small, jazzy circular motion with her hips. She knew she was bending the rules of the 19th century danse d’ecole, which required dancers to keep their hips vertically aligned and square with the torso. But it was a small gesture of greeting, a way to relieve the tedium of hours of rehearsal. When the director wasn’t looking, Lucas glanced at Gilreath and sneaked a wiggle back.

It was one of the first impulses toward creating Ballethnic Dance Company, the troupe that Gilreath and Lucas would later found in Atlanta in 1990 — the second African-American classical ballet company in the country after Dance Theatre of Harlem. The couple’s vision was unique: a multicultural ballet company that embraced African, modern and jazz dance forms to create their own voice and style, grounded in the classical ballet tradition, but with the pump and swag of its culturally diverse Southern home.

Now celebrating 25 years, Ballethnic is preparing for its annual production of Urban Nutcracker, November 19-22, set in a new location: the Riverside EpiCenter in Austell.

The move to the EpiCenter is the kind of agile adaptation Gilreath and Lucas have made countless times when faced with another hurdle. It exemplifies the resilience and ingenuity that have helped them keep the company on track for so long, in a region where it has grown more difficult for medium-sized arts organizations to survive. But their rare combination of artistry, integrity and community spirit, along with a prodigious work ethic, have enabled them to build an Atlanta institution, and in an unlikely neighborhood.

In the yard, there’s a vegetable garden and another filled with purple flowers; a wooden deck doubles as an outdoor stage. Framing a corner of the lot are two railroad shipping containers with doors and windows cut in, recent additions used to store costumes and scenery. They are painted the same shade of vibrant crimson, and their turbine chimneys stir the air like the dynamic sweep of creative energy that fills the yard.

Inside the ballet studio, Gilreath and four company members are stretching out on the hardwood floor after class. They chat about various topics — taking care of their bodies, eliminating distractions and running a dance company on a sustainable model. Gilreath speaks with clarity, friendliness and an engaging ebullience that makes people feel like they’re part of a larger vision. It’s apparent that she thinks deeply, and often, about her mission.

“Every year, we try to reinvent not only ourselves, but our attitudes,” Gilreath says. Her theme for this year is, “I’m not going to let anyone take away my joy.”

Gilreath and Lucas have reduced the number of paid positions for younger, college-age dancers who prefer working for multiple dance groups over dedicating themselves to one company. They’ve welcomed these young freelancers in recent years, but have found that if dancers “jump around” from one gig to another, they don’t bring full focus to their work — and it shows. This year, Gilreath and Lucas are focusing on a few professionals who are willing to go deeper into the classical form and draw out its many layers.

Lucas sits on the edge of the stage. His left leg is in an orthopedic boot, as it has been for the past several months as he recovers from a ruptured Achilles tendon followed by a series of post-operative infections. The energetic choreographer may be off his feet more than he would like, but his focus is ever sharp as he coaches dancers in Urban Nutcracker’s grand pas de deux.

Dancers Brandi Carwile and Savery Morgan enter the space, sweeping their arms toward one another in greeting. Morgan begins to open his arm outward and Carwile continues the motion, stepping out and graciously opening her outstretched arm toward the audience. “Think of the light hitting your cheekbones; even your eyelashes,” says Gilreath, echoing the words of Arthur Mitchell, an influential mentor in both Gilreath’s and Lucas’ careers.

During the 1950s, Mitchell was the first African-American classical dancer to gain prominence with the New York City Ballet under the direction of legendary dance master George Balanchine. Mitchell founded Dance Theatre of Harlem in 1969 in response to the assassination of Martin Luther King, Jr., and by the 1980s, DTH had grown into a world-class classical ballet company with a repertoire of unmatched diversity. The Harlem-based company dispelled racial stereotypes while achieving artistic excellence and international acclaim.

As mentor and director, Mitchell exacted a strict work ethic and upheld the highest artistic standards, values that later held Gilreath and Lucas in good stead. They were about 22 when they met at DTH. Gilreath had injured her ankle and consequently was transferred from the main company to the school during her rehabilitation.

As she healed, Gilreath began to rehearse Louis Johnson’s Forces of Rhythm with the second company. When her partner went on tour, the rehearsal director told Gilreath, “This new guy, Waverly Lucas, is going to be your partner.”

Gilreath looked at Lucas doubtfully. He was tall and handsome, but did this guy know enough about partnering techniques to do the riskiest sequence — an overhead sit lift — without hurting her ankle? With a touch of condescension, she broke the sequence down for him, step by step. “I’m going to run … I’m going to jump.”

She took a running start and jumped into the air. Lucas scooped her into the palms of his hands, pressed her above his head with ease and held her aloft. Slowly, he lowered her to the floor.

At the end of the day, hungry dancers gathered on the sidewalk outside to confer about how to pay for dinner on their modest wages. “Hey,” Gilreath said to Lucas, “You should take me to dinner.” They splurged on Western Sizzlin — no cheap Chinese food that night. The connection they made over steak and shrimp continues to keep their relationship strong.

The couple, who would marry in 1992, worked under the tutelage of some of the era’s historic and most influential figures: Ballets Russe legend Sir Frederic Franklin, Agnes de Mille, Carmen de Lavallade and others. Lucas learned how important it was to represent DTH and what it stood for; he learned perseverance, patience, persistence and the importance of selflessness when part of a larger mission.

Gilreath learned about the stage, and the magic of performance from Mitchell. His sayings have stayed with her: “Work is the star,” and “Talent is only 50 percent.” Much later, she would understand why he was so demanding.

But Gilreath also learned that she wanted a career in which she would be treated respectfully — to have more autonomy in deciding her future. She also sought a calling that would challenge her to think in many different ways, beyond tendu. And the North Carolina native yearned to return to the lush Southern environment that had always inspired her.

About that time, Gilreath’s friend Keiko Guest called her from Atlanta and urged Gilreath to attend a New York audition with Bobby Barnett, artistic director of the Atlanta Ballet. Gilreath went to the audition and afterwards, she recalled Barnett said, “Oh my God, you’re great. Come to Atlanta!”

(Next: The founding of Ballethnic.)