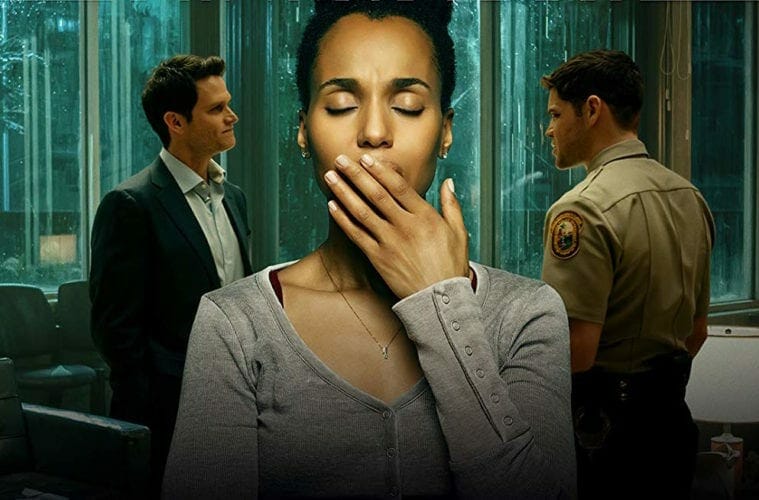 A hair-triggered talkfest, Christopher Demos-Brown’s American Son attempts to shoot an intimate X-ray on the race-riven body of our nation, particularly the perils of growing up nonwhite in a world where the phrase “Black Lives Matter” even needs to be affirmed aloud. Atlanta’s Kenny Leon directed American Son on Broadway and does so again, with his original cast, for the Netflix adaptation now streaming. I didn’t see the stage version at the 766-seat Booth Theatre, but the small screen might actually be a better home for the piece.

We meet Kendra (Kerry Washington) on a predawn, rain-lashed Miami morning in the waiting room of a police station. A frayed nerve ending, she’s trying to locate her 18-year-old son Jamal, who stormed out of the house the night before and hasn’t come home. She has learned that his car — a birthday gift from his father, her estranged husband — was involved in some sort of “incident” with police. But Larkin (Jeremy Jordan), the fresh-faced cop on duty, can’t — or refuses to — tell her much more. “We have a protocol,” he says repeatedly. He agrees to take more information from Kendra about Jamal, but their exchange gets testy due to missteps on both sides. When Larkin asks if her son has any sort of alias or “street name,” or distinguishing features like tattoos or gold teeth, she pushes back hard at the presumption that her son might have anything to do with thug-life stereotypes.

To be fair to the young cop, in her extreme distress, Kendra is easy to offend. So it’s understandable, if not excusable, when the officer later tells another man, “Bitch is totally out of control. . . . She went from zero to ghetto in nothing flat.”

Scott is white, and — as they desperately try to learn the whereabouts of their son — one of the parents’ central arguments is the battle over the sometimes antithetical ways each has tried to forge Jamal’s identity. After all, when a child is born of a mixed marriage in the United States, the default ethnicity tends to be “black” or at best “mixed-race.” Through Scott and Kendra’s viewpoints, American Son gives us a good sense of the racial no-man’s-land in which a young person like Jamal lives. We learn that at his mainly white, elite school, he has sourly dubbed himself “the Face of the Race.” (The terrific recent film Luce also explores the burden of a talented student always aware of having to be a positive representative of his people.) While it’s very well acted and compelling from start to finish, American Son’s arguments are sometimes stacked and short on nuance. It can feel schematic, and it’s easy to imagine seeing the points and counterpoints sketched out on a legal pad. (The playwright is a civil trial attorney, and white.) When another African American character (Eugene Lee) turns up in the final minutes for a scene opposite Kendra, he arrives in a way that seems designed to tick off one more variety of confrontation.

Leon’s direction is generally direct and unshowy, keeping focus on the strong performances. In fact, only in a few flashback scenes that seem designed to camouflage American Son‘s stage-bound structure does the film go a little slack. They’re needless distractions.

Despite its lapses into artifice and a few examples of stagey, overwritten speeches, American Son has power. How could it not, in the wake of the many fatal interactions among young black men and armed officers in recent years — to which the play directly alludes. Unfortunately, the script repurposes Eric Garner’s words, “I can’t breathe,” in a way that borders on ugly contrivance. Flawed as it is, American Son is a vital conversation starter, as it explores the racially mine-sown landscape many of us walk through daily.