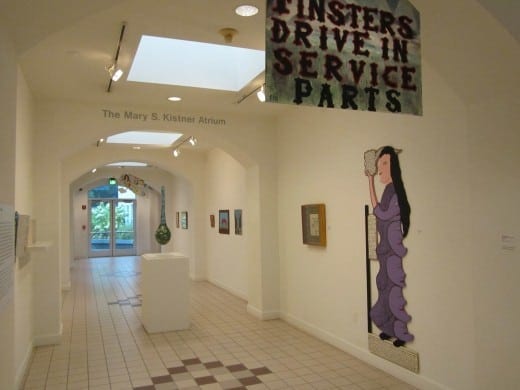 One gallery is devoted to the work of Rev. Howard Finster.

Blurred Lines: Contemporary Self-Taught Art Meets the Masters, at the Hudgens Center for the Arts through December 30, is an exhibition that is either completely uncontroversial or dramatically dispute-arousing, depending on what you think it is trying to prove.

How folk art should be situated in relation to fine art is assuredly open to discussion. On the one hand, self-taught art has been influencing mainstream art ever since Picasso hosted a banquet in honor of the self-taught Henri Rousseau in 1908. On the other, it is only recently that the look of self-taught art has made it seem that the influence is running the other way, even when there is no influence.

Ceramic artist and folk art supporter Tina A. Cox humorously titles herself the “Self-Taught Curator” of this exhibition, in which she matches up selected works of self-taught artists with works by what might justifiably be called “the masters.” There is almost no name among the mainstream artists here that would not be familiar to most visitors. As she cleverly puts it, she lets viewers compare and contrast “from Dalí to Dial, Rowe to Rauschenberg.”

One of the show’s few missteps comes right at the beginning, where Wassily Kandinsky is paired improbably with Nellie Mae Rowe. Despite a playful line snaking its way through the strict geometry of Kandinsky’s Avant le Lettre #69, there is not much reason to find points in common with Rowe’s expressionistic animal picture. Kandinsky’s early work from Munich, which took its inspiration from Russian and German folk painting, would have made more sense here, but the Hudgens’ Bauhaus-era lithograph was what was available.

Going round the gallery the other way would first bring viewers to a vase of flowers by Sybil Gibson next to a vase of flowers by Benny Andrews, and self-taught Gibson’s flowers read as a more loosely rendered version of the vividly energetic image by the distinguished African American artist. Here the lines between artistic credentials have very clearly blurred, and it is one of the most successful pairings.

When Thornton Dial is placed next to Joan Míro’s 1948 Parler Seul, Míro looks more like a folk artist than Dial, and the placement of a Henry Spiller drawing in between Fernand Léger and Pablo Picasso makes Spiller look like a less accomplished imitator of the latter.

The matchup works the other way around in another Picasso pairing. Richard Burnside’s Dance looks considerably more sophisticated than Picasso’s childlike Faunes et Flore. As Picasso is reported to have said, it took him years to learn how to undo his training that successfully.

One of the most remarkable juxtapositions is the placement of J. B. Murry’s Spirit Writing between Salvador Dalí’s Lucky Number and Dante’s Inferno. In this company, Murry’s palette and fluid vertical lines look remarkably contemporary, or at least modern, rather than being a rural-mystical alphabet only decipherable in the spirit when read through a glass of water.

Given that set of expectations, I “recognized” an adjacent work as something from Dalí’s series depicting Don Quixote, rather than what it actually is, Purvis Young’s Warrior Under Stars. Young, of course, was discovered because he frequented the Miami Public Library, studying every book in the art section, thus qualifying him as the ultimate self-taught urban artist.

Self-taught artist Ab the Flagman not only lives in a city (formerly in Atlanta, today in the metro Orlando town of Sanford, Florida) but has earned a living by hanging an art gallery’s exhibitions as well as by carpentry. Another urban self-taught artist, Lee Godie, sold her canvases on the steps of the Art Institute of Chicago, considered herself comparable to Cézanne (much as Le Douanier Rousseau thought himself the equal of established painters in 1908), and in general produced a body of work that would fit right in, in a more restrained and decorous fashion, with the comic book or folk art–like productions of her art school–trained Chicago contemporaries, the Hairy Who.

These facts raise the question of just what is “folk” about self-taught art, as distinct from “outsider” or “grassroots,” terms sometimes used to describe artists who never set foot in an art school but did not grow up in isolated rural environments without access to formal education.

Cox sometimes pushes her thesis in unconvincing directions; her deployment of a large number of John Marin works merely brings home the difference between his tightly skilled aesthetics and the consistent but typically less confined aesthetics of most self-taught artists. Bits of Madge Gill’s technique of drawing do rhyme with bits of Marin’s, but the two still don’t play well together.

Lonnie Holley, on the other hand, gets on brilliantly with Jim Dine, and in a surprising neighborly exchange, Jasper Johns’ English Light Bulb looks right at home across the corridor from an uncharacteristically allegorical Jimmy Lee Sudduth, Superpowers: US and Russia.

Blurred Lines ends with an extraordinary mini-retrospective of Howard Finster, the self-taught artist who blurred the lines most spectacularly without doing more than appearing on national television, designing an album cover for Talking Heads (shown here complete with autographs) and generally behaving like a savvy pitchman for his own art and for his distinctive sci-fi-tinged brand of Christianity in a media-saturated contemporary environment.

The lines have been blurring for many decades, and they do so in this. But when it comes to the proposition that the lines have not just blurred, they have been erased, the inclusion of someone like the Hairy Who’s Jim Nutt would have tipped the balance in a way that the Peter Max in this show does not. However, Cox had to work with the few collections to which she had access, and the Hudgens’ insufficiently appreciated permanent collection was a major resource. The collection has probably never been presented in a more illuminating context; putting these diverse works in dialogue with self-taught art highlights their singular attractiveness.