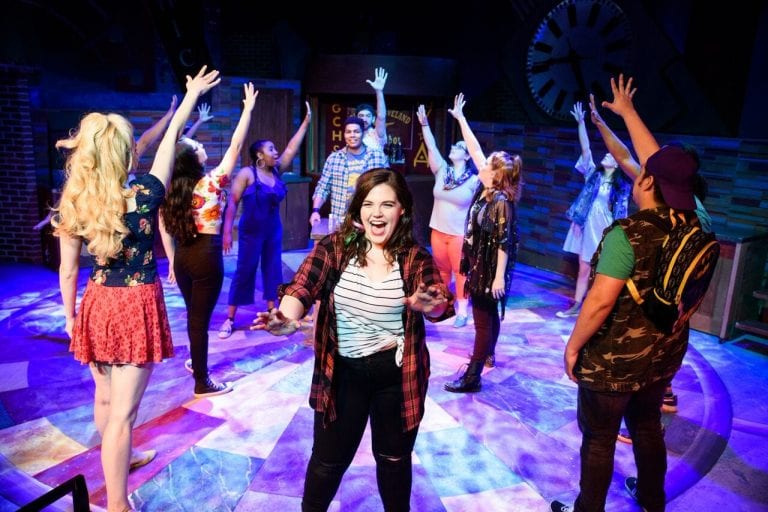 Freaky Friday is sparked by a stellar cast but bogged down by too many lightweight songs. (Photo by Greg Mooney)

Review: Horizon’s “Freaky Friday” hits the high notes but doesn’t quite pull together

In the 70s it was Barbara Harris and Jodie Foster, in the 90s (on TV) it was Shelley Long and Gaby Hoffmann and in 2003 it was Jamie Lee Curtis and Lindsay Lohan. Now a Freaky Friday for a new generation is onstage, in a production now playing at Horizon Theatre through April 22. It has an engaging cast and some smart tunes, but the musical itself feels a little underdeveloped.

Based on the young adult novel by Mary Rodgers, Freaky Friday follows a mother and daughter who wind up swapping bodies. In Chicago, overworked (and widowed) Katherine Blake (Jennifer Alice Acker) is running her catering service while her daughter Ellie (Abby Holland) is a typical rebellious teenager. The two always seem to be arguing, yet a freak accident leaves them inside each other, with Ellie embarking on a busy day of school and Katherine hosting a photographer shooting her for a magazine cover. Complicating matters, Katherine is about to marry her new beau Mike (Frank Faucette). To get their true selves back, Katherine and Ellie need to find an hourglass to take the spell away.

Freaky Friday features music and lyrics by Tom Kitt and Brian Yorkey of Next to Normal fame while the book is by Bridget Carpenter, a writer for TV’s Parenthood and Friday Night Lights as well as a playwright. The opening number, “Just One Day,” is catchy and sets a promising tone. Yet no sooner than the number is done, the body switching takes place before the two central figures have even exhibited much in the way of character traits. It sets a deficit that the musical never really overcomes.

The scenario is one that is easy to have fun with, but Carpenter’s book is the real issue here. It never takes full advantage of its enticing situation. It strays wildly, including way too long in Ellie’s high school, and feels like a wasted opportunity. The big dilemma of the second act — oddly — is when Katherine’s son/Ellie’s brother Fletcher (Joseph Masson, alternating with Vinny Montague) decides to run away from home.

The musical debuted a few years ago at the Signature Theatre in Arlington, Virginia, and has had some regional mountings. No Broadway gig is planned, but a Disney Channel staging of the musical is in the works. This is probably perfect fare for kids, but adults might get irritated with its top-heavy focus on the high school shenanigans.

Score-wise, this is very erratic. Every once in a while there’s a gem, such as “Parents Lie,” or a funky, spirited number such as “Busted” or “Oh, Biology.” Unlike the score in Next to Normal, though, the music here largely feels lightweight and padded.

For a show with such a simple, clear premise, Freaky Friday runs a very long two hours and fifteen minutes, when a 90-minute version sans the bubblegum elements — and more depth for its leads — could have been more successful.

Luckily, Holland and Acker are very effective as the central characters. Each of the women have strong voices and get the opportunity to show them off — as well as some comic skills. Holland is a newer face in local theater with tremendous potential.

The supporting cast includes such versatile performers as Jeff McKerley, Jill Hames and Randi Garza, who’s particularly funny as a high school rival of Ellie. The company includes 19 performers, who all are talented and eager, but they start to blur together after a while. The musical has so many characters, it’s easy to lose track of who’s who.

Heidi Cline McKerley is a reliable director (she helmed the engaging The Toxic Avenger at Horizon a few years back and countless other high-quality productions), and she makes this much more enjoyable than it has the right to be. The choreography by her and husband Jeff McKerley is slick and takes advantage of the Horizon stage and the clever set that Moriah Curley-Clay and Isabel Curley-Clay have envisioned. Music director Alli Lingenfelter and her onstage band also help make some numbers really pop, even if the majority of them seem below Kitt and Yorkey’s normal standards.

It’s all very “Afternoon Special,” with mom and daughter putting themselves in each other’s shoes and seeing how the other feels — and learning a lesson in the process. It’s hard to knock a show that extols the virtue of family, but the musical never quite comes together. Freaky Friday has a pluck and spirit all its own, and occasionally some memorable songs, but overall those can’t conceal its structural flaws.