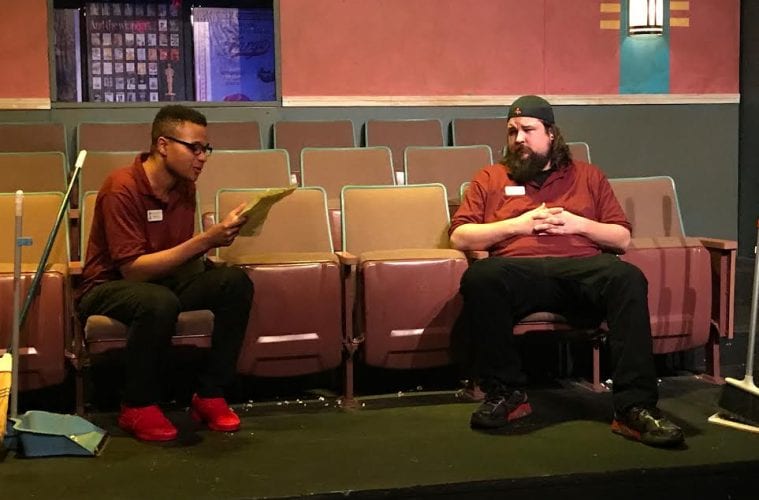 Review: Out of Box’s “The Flick” captures the last picture show with melancholy humor

In a tidy coincidence, Annie Baker’s melancholy comedy The Flick opens at Out of Box Theatre at nearly the same time that Atlanta film impresario George Lefont announced his retirement. The Flick, through March 25, takes place at a vintage Massachusetts movie house not that different from the ones Lefont owned in Atlanta for decades. It’s easy to imagine the play’s eponymous cinema as resembling the Lefont Garden Hills.

The Garden Hills closed years ago (and none of Lefont’s cinemas became as decrepit as the ones in the play), but just as Lefont’s retirement marks the end of an era of Atlanta film exhibition, so does The Flick offer a valediction for a kind of American (and probably global) moviegoing, with lavish, independent movie palaces giving way to interchangeable, multiscreen chains.

If The Flick were a movie, you could say it starts as a snarky service-industry romp along the lines of Kevin Smith’s Clerks and becomes closer to a Kenneth Lonergan dramedy like You Can Count on Me. Directed by Matthew Busch, The Flick is a scruffy but funny and engaging production that takes a little too much time to tell its chosen story.

The set, designed by Busch and Carolyn Choe, presents several rows of cinema seats, behind which is visible a window into the projection booth. The play opens with a timeless, back-to-reality ritual of moviegoing, as two employees enter to sweep up the stray popcorn kernels and other unfinished concessions after the feature. “We call this ‘the walkthrough,'” long-time employee Sam (Ben Barlow) explains to Avery (Jacobi Hollingshed) on his first day.

Taste in movies provides a window to character: loquacious Sam enjoys commercial entertainments like Avatar, while cinema snob Avery makes proclamations like, “There’s been no great American film since Pulp Fiction.” Meanwhile, young projectionist Rose (Julia Weeks) cares less about movies than going out and having a good time.

At first, the playwright crafts a snappy workplace comedy with movie references. Sam rants about having to clean up snacks patrons bring from outside, while Avery proves to be an unbeatable player at the “Six Degrees of Kevin Bacon” game. “That’s almost a disability,” Sam says after one of Avery’s demonstrations.

More serious undercurrents soon emerge. Sam and Rose introduce the newcomer to the tradition of “dinner money” — skimming a little cash every night to make up for their $8.25/hour pay. When Avery voices concern that if they get found out, he’ll take the blame as the only African American on staff, the play acknowledges an uncomfortable dynamic in U.S. race relations. Meanwhile, Sam increasingly views Avery as a rival, both for Rose’s attention and as a colleague. At least a decade older than the others, Sam feels stuck in place as younger workers move up the ladder to projectionist.

The performances of the likable cast initially seem like stock comedy characterizations: Hollingshed plays the bespectacled nerd with tight body language, Barlow the shaggy, short-fused slacker, Weeks the sexually aggressive young woman who likes to “party.” But the players explore the roles with increasing depth as the play progresses.

Avery embodies OCD and multiple phobias while being concerned that his devotion to movies will alienate him from the real world, leaving him as “the weird, depressed guy.” Weeks conveys Rose as being at once provocative and enigmatic. When she does a funny, extended dance to a Jay-Z song, she seems at once seductive and intentionally off-putting, but eventually opens up with her own personal struggles.

For a one-set, essentially three-character play (not counting Jeffrey Allen Sneed in two brief roles), The Flick is strikingly long. The first act runs nearly 90 minutes, the second over an hour. The production’s pacing trades naturalism for momentum: there are many long, credibly awkward pauses that feel true to individual scenes, but the plot feels far too leisurely as it goes along. Several scenes just show the empty theater with nothing happening but the “end credits” music playing as the workers wait to clean up.

The action becomes more plot-driven deep in the second act — characters makes deep, personal revelations, Avery crusades against the likelihood of The Flick abandoning celluloid for digital projection — it would be more effective to have a sense of events accelerating to a climax. In DVD terms, the production feels like the drawn-out “extended edition” of a film better seen in a tighter “theatrical cut.”

Even if you don’t care about film vs. digital projection (although you should), The Flick succeeds at making its setting a metaphor for the corporatization of entertainment and the struggles of American workers, who have little recourse but to turn on each other. And while it doesn’t acknowledge this directly, the play celebrates the communal experience of seeing movies at a time when the Netflix model keeps people increasingly at home. The Flick shows plenty of nostalgia for an increasingly obsolete model of moviegoing, even as it warns against making movies a way of life.