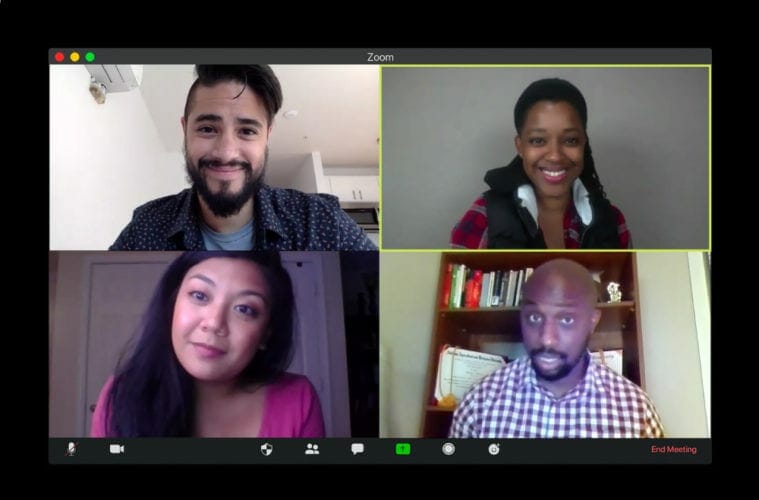 If Horizon Theatre Company’s online production of Completeness is any indication of what this season will bring for those of us who miss theater, audiences can have hope.

The experience of watching virtually from home with 135 others is strange and not without hiccup, but it’s possible to lose yourself in this romantic comedy by Tony Award winner Itamar Moses (The Band’s Visit), get caught up in the emotions of the scientist characters and moved by these performances.

A Zoom gathering isn’t the same as being in one room, obviously, but the closeness you feel to the actors and to other audience members is still somewhat there. (The next two Completeness performances, which feature introductions and moderated talkbacks with the cast and special guests, are at 7:30 p.m. Friday and Saturday, October 2-3. Tickets are free, but a $10 donation is suggested. The recorded performance will be available to watch through October 3 via the Horizon website).

Part of the joy of theater is the metaphorical tightrope walk, the sense that this is happening live and will never happen quite the same way ever again. During opening weekend of Completeness, attended by Moses himself, there were audience members who accidentally chattered to the room when unmuting their microphones. At one point, the video froze for three minutes. Audience members filled the gap with comments that popped up on-screen until the show played on.

Rather than detracting, these moments were highlights. They made the experience feel riskier, amusing and more communal. With crew members scrambling to fix unpredictable issues that arose, the show felt like theater. And often, the audience was quiet, watching the story unfold and listening to the strong script. Completeness tells a good story. This production from director Heidi McKerley includes a Zoom-staged love scene, which is so odd in and of itself that it should be seen. The play is solid and very, very wordy. Its characters are academics who use scientific jargon to talk about big concepts and philosophies.

Chris Hecke plays Elliot, an excitable and hyper computer scientist who finds himself attracted to a molecular biologist named Molly (Naima Carter Russell). Molly’s experimental genetic research is messy, so Elliot develops an algorithm to help her get the information she needs more efficiently.

Of course, all the academia is pretense because the characters are attracted to each other. The algorithm meetings turn romantic and are complicated by the fact that Elliot and Molly are both in relationships with other university colleagues. Elliot’s with a coworker Lauren (Shelli Delgado); Molly is linked to a faculty adviser (Eric J. Little).

The rational way in which science works clashes with the random ways in which emotional people collide. Completeness takes unpredictable, random turns, no matter how smart its characters are or how earnest and decent they want to be. The piece is at its best in the emotionally raw scenes. There’s a breakup in Act 1 that veers from funny to devastating as its characters talk about how they feel and why. And then it transcends more levels than that.

Hecke is charming, and he and Russell have a great, intentionally awkward and nerdy chemistry. Russell plays Molly as more reluctant, wounded and rightfully guarded. She’s excellent. Delgado and Little, playing dual roles, make the most of their meaty material. Delgado’s two characters allow her to show a fun range of feelings, and she gets the show’s biggest laugh.

McKerley’s direction shows itself mostly in the how these four people in separate rooms interact, passing objects from one screen to another. The effect isn’t fluid, but it doesn’t take you out of the story and it feels inventive.

Given the circumstances, Horizon has done its best. And its best is pretty good.