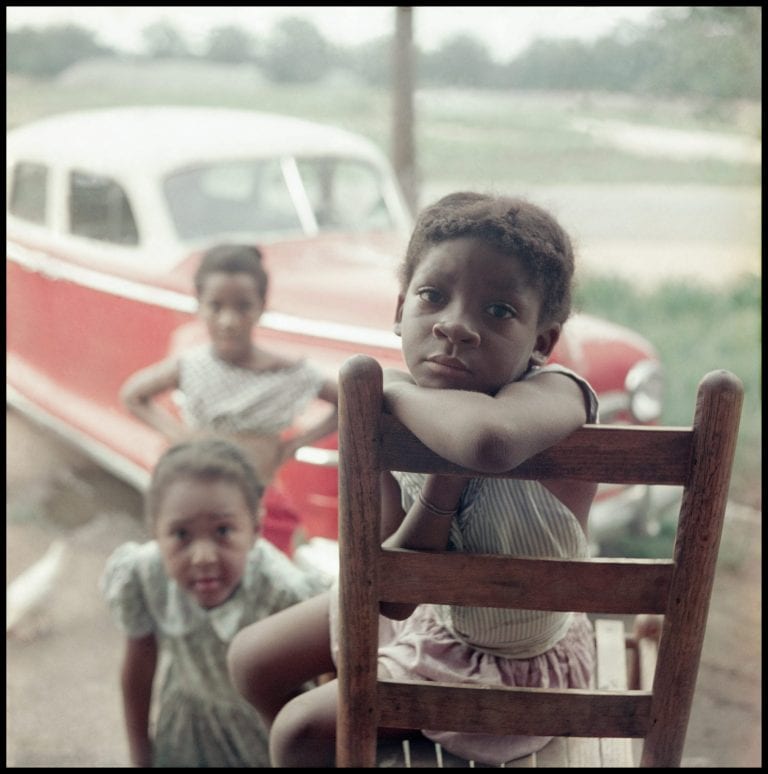 Review: Photographer Gordon Parks told “Segregation Story” in his own way, and superbly, at High

When Gordon Parks headed to Alabama from New York in 1956, he was a man on a mission. An African American, he was a staff photographer for Life magazine (at that time one of the most popular magazines in the United States), and he was going to Alabama while the Montgomery bus boycott was in full swing. His assignment was to photograph three interrelated African American families that were centered in Shady Grove, a tiny community north of Mobile. Parks’ editors at Life probably told him to get the story on segregation from the Negro [Life’s terminology] perspective.

What’s most interesting, then, is how little overt racial strife is depicted in the resulting pictures in Gordon Parks: Segregation Story, at the High Museum through June 7, 2015, and how much more complicated they are than straightforward reportage on segregation. Sure, there’s some conventional reporting; several pictures hinge on “whites/blacks only” signs, for example. But most of the pictures are studies of individuals, carefully composed and shot in lush color.

And they are all the better for it, both as art and as a rejoinder to the white supremacists who wanted to reduce African Americans to caricatures.

For example, Willie Causey, Jr. with Gun During Violence in Alabama, Shady Grove, 1956, shows a young man tilted back in a chair, studying the gun he holds in his lap. Behind him, through an open door, three children lie on a bed. The title tells us why the man has the gun, but the picture itself has a different sort of tension. The young man seems relaxed, and he does not seem to notice that the gun’s barrel is pointed at the children.

The untitled picture of a man reading from a Bible in a graveyard doesn’t tell us anything about segregation, but it’s a wonderful photograph of that particular person, with his eyes obscured by reflections from his glasses.

Other pictures get at the racial divide but do so obliquely. In a photograph of a barber at work, a picture of a white Jesus hangs on the wall. At the barber’s feet, two small girls play with white dolls. And a heartbreaking photograph shows a line of African American children pressed against a fence, gazing at a carnival that presumably they will not be permitted to enter.

Parks’ decision to make these pictures in color entailed other technical considerations that contributed to the feel of the photographs. The color film of the time was insensitive to light. That meant exposures had to be long, especially for the many pictures that Parks made indoors (Parks did not seem to use flash in these pictures). That in turn meant that Parks must have put his camera on a tripod for many of them. He also may well have stage-managed his subjects to some extent. If nothing else, he would have had to tell people to hold still during long exposures.

In other words, many of the pictures likely are not the sort of “fly on the wall” view we have come to expect from photojournalists. Parks’ process likely was much more deliberate, and that in turn contributes to the feel of the photographs.

Parks was a protean figure. Before he worked at Life, he was a staff photographer at Vogue, where he turned out immaculate fashion photography. Later he directed films, including the iconic Shaft in 1971.

However, while he was at Life, Parks was known for his often gritty black-and-white documentary photographs. Though they share thematic interests, the color work comes as a surprise.

Life published a selection of the pictures, many heavily cropped, in a story called “The Restraints: Open and Hidden.” However, in the nature of such projects, only a few of the pictures that Parks took made it into print. Many of the best ones did not make the cut. And then the original transparencies vanished.

It was not until 2012 that they were found in the bottom of a box. A wonderful thing, too: this is a superb body of work.