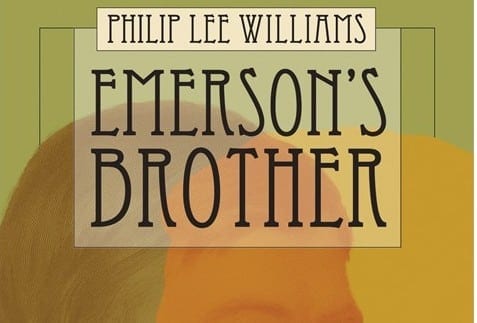 When I touch my quill to paper I know that in madness I am apt to make a Great Fool of myself and yet there is a perfect calm in me when I come to the field and see fireflys singing to the Earth like a chorus of Angels.

Set in a time when people still wrote letters, Philip Lee Williams’ epistolary novel Emerson’s Brother (Mercer University Press) is an intimate study of Bulkeley Emerson, brother of the famous philosopher Ralph Waldo Emerson. In real life, Bulkeley spent time in a mental institution and later, unable to live alone, in the homes of various caretakers. In this book, Bulkeley is living with the last of them, a couple who show him affection and care and tie him to the bed when he is raving.

Consisting of more than 100 letters that range in length from a few words to several pages, Emerson’s Brother, which is one of the nine Townsend Prize nominees, mostly speaks in the voice of Bulkeley, the author of almost all the letters. The majority are to his brother, though a few are addressed otherwise, including to God or to dead relatives, and a few letters come from other people, such as Henry David Thoreau and, rarely, Waldo.

The novel has no plot other than the chronological events in a year of Bulkeley’s life. Within his constrained circumstances, we watch both people and animals come and go and witness the changes of seasons.

Readers who prefer a strong plotline may be disappointed, but Emerson’s Brother has much to offer as a work of poetry and philosophy. Bulkeley, whose mental state moves between nearly normal to extreme derangement, offers his musings on the world in a vividly poetic style.

There are lines of such remarkable lyrical beauty that the reader may stop and ponder with pleasure [quoted lines retain original punctuation and spelling]: “This straw is filled with the sunlight which grew it. Even in the darkest night of cold rain and fear, this straw glows with messages from the sun.” And given Bulkeley’s sensitivity to nature, it is no surprise to find the mystical metaphor “Sun has come full here and the cropps begin their pilgrimage toward fruit.”

It is also stirring that deep within his madness, perhaps because of it, Bulkeley has the capacity for profound observations. He writes at times, for instance, on love: “How many are loved only in pretense. and yet we must live and do our best to believe that someone loves us.”

Bulkeley even comments on the kind of transcendental perceptions his brother made famous: “then I said you are not listening properly, for it is there always, even in the winter when storms roar there is a singing in the bare branches.”

In this novel, Williams has brought Ralph Waldo Emerson’s enigmatic brother into the light and air, allowed him to walk and speak, to become real in his madness and suffering. His is a sad life, yet we also see in it beauty and joy and affection. By demonstrating Bulkeley’s humanity even as he suffers from such disturbing madness, Williams shows our humanity as well.