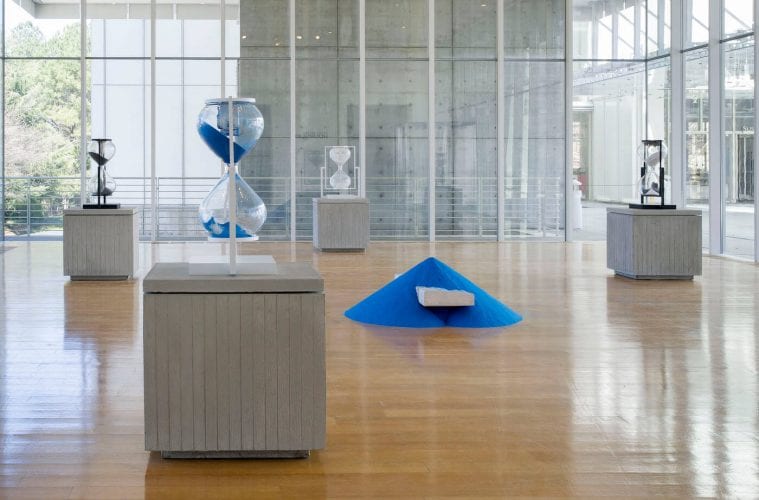 Images courtesy of the artist and Galerie Perrotin and by Guillaume Ziccarelli. Illustrations by Jon Ciliberto.

The High Museum of Atlanta commissioned local choreographer Lauri Stallings of gloatl to create movement pieces (“activations” — not dance) for installations to accompany New York artist Daniel Arsham’s Hourglass (through May 21). The choreography composed for two of the three room-filling works is a seamless interaction, rather than an overlay of dance atop space. Or, more accurately, the two dancers and the artwork exist in the same world.

What is that world? 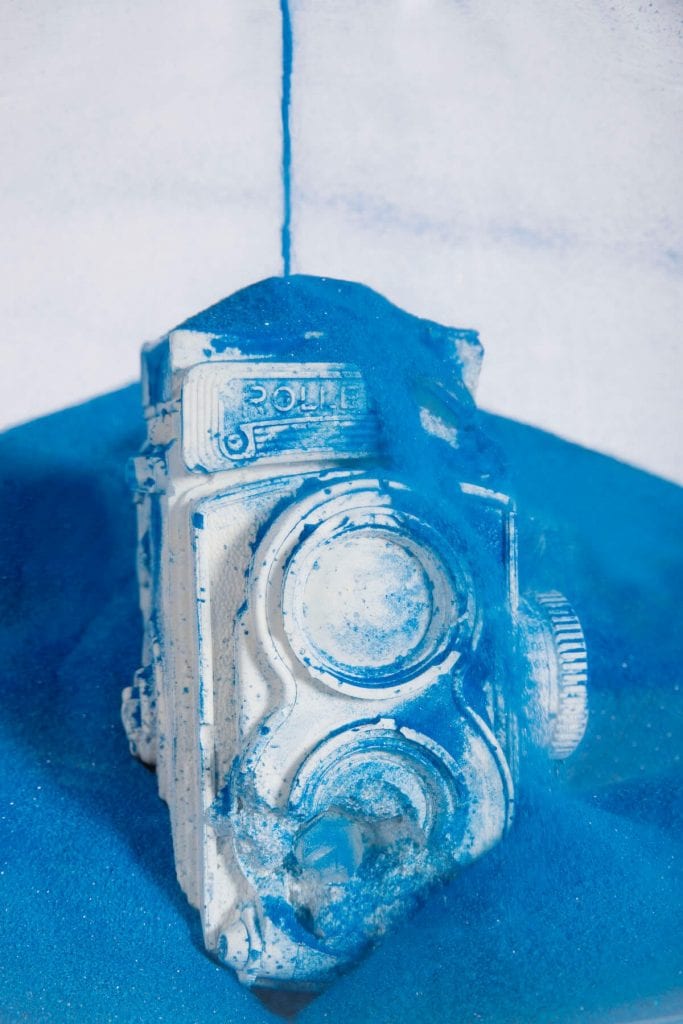 At the High, Arsham constructed one space in natural light, another in artificial light (a third, smaller space was not created specifically for the High). In the atrium of the Anne Cox Chambers Wing lobby, floor-to-high-ceiling glass windows form two of the room’s four walls. Two floors above, moderately dim blue light illumines the second large installation, evoking night. The performers in each space also present a complementary pair: a 12-year-old girl in the daylight, an 83-year-old man in the twilight.

The key idea expressed in Arsham’s installations is a continuation of his now decade-long fictional archaeology, or Future Relics project in which he casts modern (but slightly out-of-date) technological objects (cameras, phones) to create a “future archaeology,” as if these objects were excavated in the future (2079, to be precise). While a Walkman or a Polaroid camera have fairly clear cultural meanings to individuals living today, what meaning will such items have in the future, when cultural constructions have shifted, or been erased entirely?

The project was initiated after Arsham made “a trip to Easter Island, where he spent a month drawing archaeological relics for a Louis Vuitton travel guide.”

The casting materials are ash and pulverized crystal, thus transforming the objects themselves from something buried in the earth and brought forth changed by time, water and wind, into metamorphosed aspects: things retaining the form if not the matter of the originals. The uniform quality of the objects further removes them from the present into the fantastic. Arsham himself stands in for the usual physical intermediaries between present time and future archaeology: he is time and material change on contemporary objects and contexts, as well as the curator of what is preserved.

This individual agency points to the philosophical position behind the artist’s future archaeology: meaning is human-created but elusive when time (or something else?) breaks the direct connection between person and object.

Individual ownership, too, creates such a gap. A wealthy person’s luxury car means something to him that it doesn’t mean to someone else. This consideration of meaning and objects and archaeology brings to mind the sometimes arbitrary choices historians make about the past: some cultures are prized, others ignored. The same capricious meaning-creation guides the art world. One wonders if Arsham’s coolly intellectual construction of an object-world that appears almost exclusively in the art world partakes in this awareness.

On the other hand, his cast telephone, at $450, has sold out its entire 500-piece edition. His cast Walkman in the same edition size sells for $1,200. So, the creation of meaning clearly has value, provided one is the seller of it.

Why raise this point?

Arsham has been making cast objects of exactly the same sort for 10 years. Their inclusion in the High Museum feels, to me, forced, or at least, wanting originality: more like he opened a store and stocked it with products rather than created a unique installation. Whenever an artist succeeds in selling the things he makes, and continually does so, year after year, one wonders: is the continued making due to the richness of the idea, or to enriching himself? Call it the “Chihuly Effect.”

These cast objects appear in the High Museum installations in several ways. In the downstairs gallery, film cameras, human hands and faces are encased in large hourglasses, fixed such that the finely crushed, time-keeping crystals of blue, white and grey cover them or expose them. In the center of the room, an electronic keyboard is half-embedded in a large, conical pile of bright blue sand. 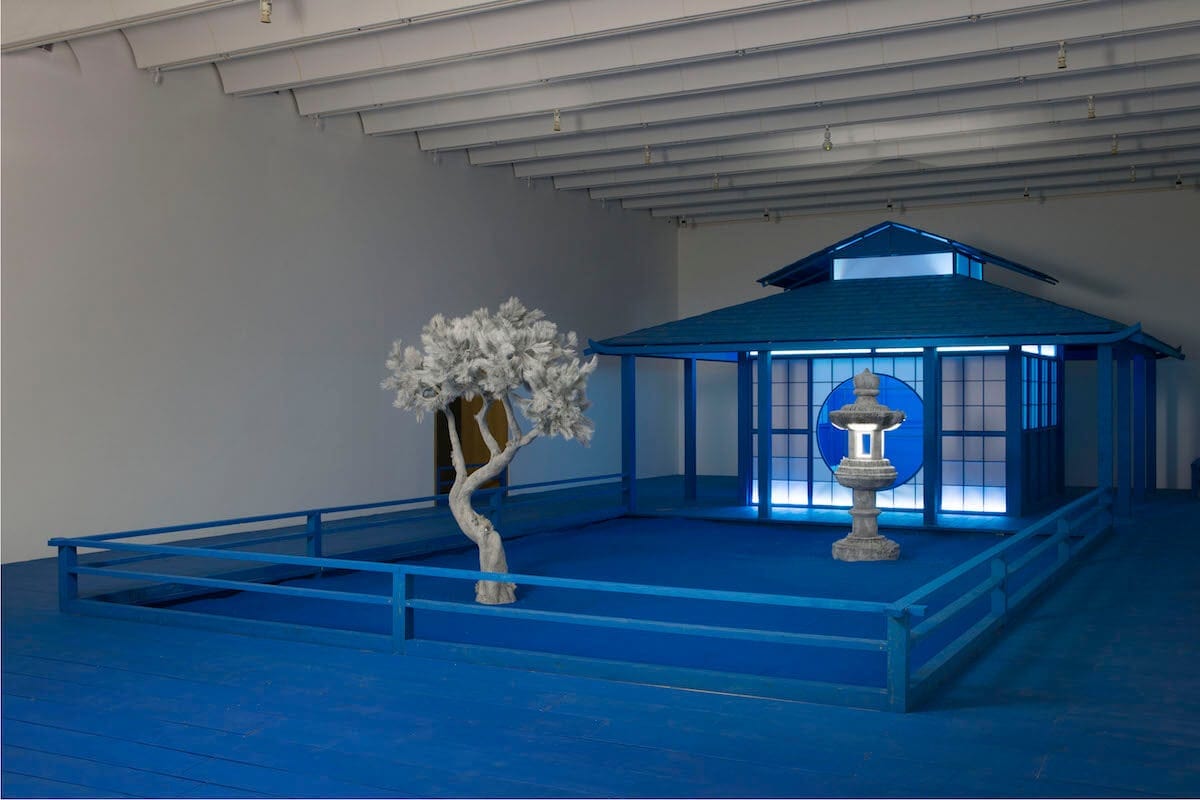 Upstairs, in a room-filling installation representing a Japanese garden, sits a cast stone lantern. Within the “teahouse” are casts of a seated woman, frozen like a figure from Herculaneum, and of a film projector.

While the hourglasses present a fairly literal, even elegant, expression of future archaeology (moving sand = reversing the course of time, revealing objects from the past), the Japanese garden and the cast objects are harder to place, beyond the broad understanding that everything in the present will someday exist in the future, if in an altered form. The strange incorporation of Arsham’s stock objects into a Japanese-style garden and teahouse caused me to wonder if the former were there just because that is what Arsham does, and that he didn’t make the effort to work out whatever compelled the Japanese garden in the first place. Put another way: Arsham is a darling of the commercial art world because of his talent for materiality; this pedigree has not translated well, however, to the museum setting.

The garden is an oddly cliché “object.” The most substantial work Arsham constructed at the High, it evidences absence of idea and creativity. Why is a cheesy cultural appropriation for sale as an executive toy in myriad desktop forms worthy of a full museum installation? 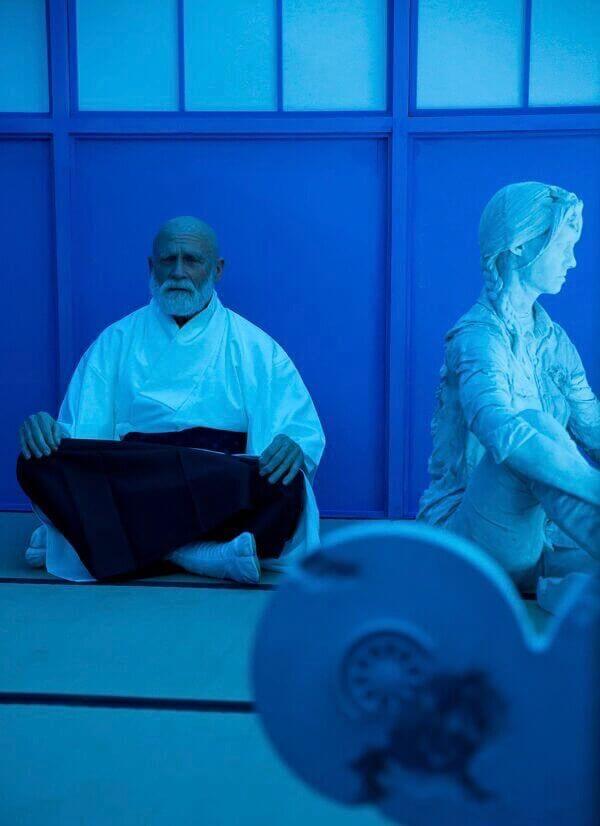 Arsham describes the garden itself as a future archaeology, specifically derived from his recent visit to Kyoto: “The gardens, the position of the rocks, and the raking of the sand has occurred for hundreds of years, unchanged, every single day. These buildings, although they feel like they’re in the present moment for us, essentially cross time.” However, the central idea of Buddhism is that everything changes. For this reason, I imagine, despite the overt Buddhist trappings of the garden, Arsham instead speaks in this quotation about Shinto temples in Japan, for instance, the Ise Jingu shrine, which is rebuilt in exact replica every 20 years. It is hard to know.

The garden does offer the opportunity for the artist to utilize ground crystal sand in a more monumental form: a large rectangular field of electric blue sand — enclosed by an awkward fence (Japanese dry rock gardens are not, typically, fenced in) — is raked in clean patterns as in Japanese dry rock gardens. The effect of the blue expanse under dim lighting does drift the visitor into a penumbral mood that conveys the artist’s interest in ambiguous meaning.

This region includes a striking “petrified” tree, shiningly bright under the subdued blue light. The intense blue of the sand is something new for Arsham, whose color-blindness was recently somewhat corrected by the use of special glasses. One wonders if this blue is for him a kind of discovered relic, something whose meaning he struggles to discover.

The movements choreographed to work in the well-lit, downstairs space consist of a mapping; the key points of that map are the hourglasses (the young glo artist turns them as they empty). Her motion was stillness with short bursts, rapid but nonspecific hand and arm gestures.

“She’s a performer, she’s a timekeeper: she keeps track of time on the hourglasses,” the security guard told me regarding the young gloatl artist (moving artists, or “people movers”) performing there. 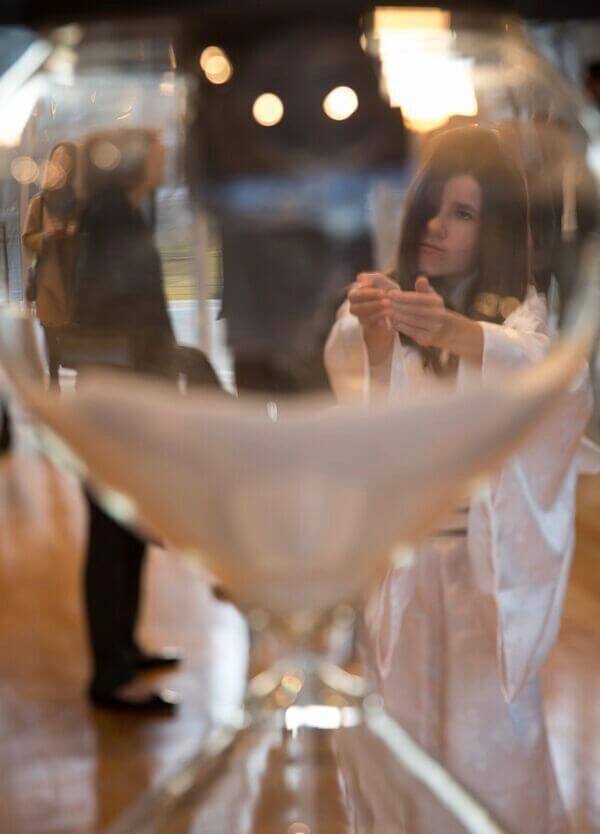 Ms. Stallings told me that she is not, properly speaking, a “dancer,” but a young woman whose biography suited her for the artwork. Stallings is well-known for her open approach to dance, often integrating the gloatl moving artists with audience and others. Clad in white robes, the young woman’s quiet presence in the space, for instance, seated on the floor amid the hourglasses which visitors would walk around and through, can come as a surprise, and thus compel those who enter the space to reconsider how and what their own roles are. Such a reconsideration would not occur were the dance a set piece, which by contrast would create the sense that “once the dance is over, I can move in the space in a way differently than from when the dance is happening.”

Audio accompanies each of the two large installations. Upstairs, a man’s voice meanders in a hazy sort of philosophy: things don’t change, forms appear and fade away. Individuals, we are told solemnly, have personal encounters with objects from the past and look for a codex to explain what they mean, what they meant to those who made them. The hushed voice asks: “Are we good? Are we bad?”

Downstairs, a young girl’s voice describes in some detail the context for the hourglasses and cast objects: a science fictional world, a submerged city, dolphins as aliens, and a revolt against institutional meaning: “We looked to the archaeologist to tell us what happened. . . . We believed the stories, and we trusted in their knowledge. None of it was true, though.” I had trouble seeing what value these voice-overs provided, eroding both direct visual apprehension and the mystery of familiar objects in unfamiliar forms, and sophomorically over-contextualizing the objects themselves.

The garden space offers a rich place for glo’s “people mover” to operate. Clad in Japanese-ish robes, a grey-bearded, monk-like figure alternatively reclines and rakes the expanse of blue sand. The most striking aspect of the motion is its stillness, with movement existing to place the figure within the space, rather than especially as action within it.

A series of mudra-like hand gestures also refer to Japanese Buddhism, although one imagines that one is no more meant to take these hand gestures as literal expressions of Buddhism than the garden itself.

On the other hand, glo’s activations did activate the installations, transforming them from just things to look at into living or lived in/through spaces. I found it far easier to overlook the paucity of idea and overbearing object-focus of Arsham’s installations when my eye was guided through them by gloatl’s subdued, thoughtful movements.

gloatl’s performances in Arsham’s installations are on Sundays, noon to 5 p.m., through May 21.