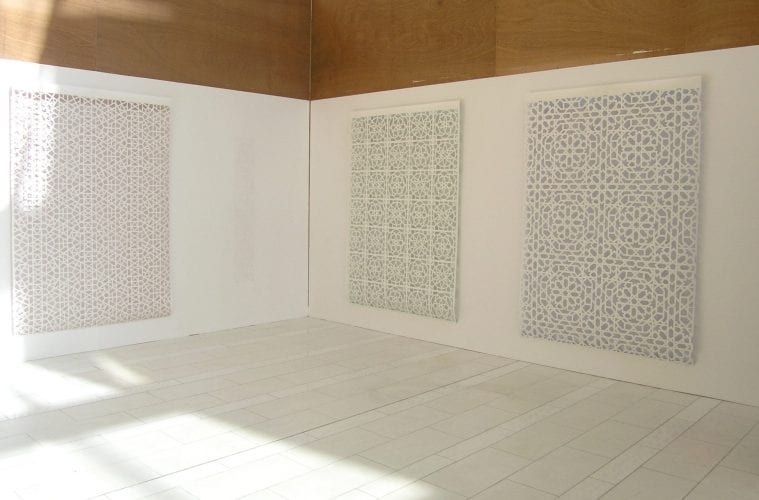 The exhibition’s title is instructive. The very idea of transliteration, the linguistic term for letters or words made from a different alphabet or language, is critical to understanding this show of work by six artists with multicultural backgrounds. The Spanish word aljamía is itself a transliteration of Arabic letters, words and Moorish texts written in Iberian Romance languages in Arabic script. Although aljamía, like transliteration, is a linguistic term, the artists in this show reveal the depth of Islamic influence as a kind of visual, or geometric, aljamía — a transliteration of one culture’s visual expression into the daily life of another.

Through hand-cut paperworks and architectural renderings, these artists integrate and repurpose the traditional principles of sacred geometry in Islamic art into visual, cross-cultural representations of their own design that remind us of the hybrid nature of all culture.

The works in Geometric Aljamía emerged from an interdisciplinary cultural exchange that debuted at the 2013 Hybrid Making Tasmeem Conference in Doha, Qatar, organized by faculty from Virginia Commonwealth University’s School of the Arts (VCUarts) in Richmond, Virginia, and its branch campus in Doha. Two of those VCUarts professors, Reni Gower and Jorge Benitez, anchor the exhibit with contemporary work that balances material and historic context. Gower painted the backs of her papercuts in colors that cast intricate shadows.

Gower’s three large-scale papercuts, floating an inch or two off the wall, set the hushed tone of the room. As seen from the gallery’s entrance, they could be ivory doorways or passages into a Moorish palace. Gower cut the geometrically patterned pieces from pristine white paper and painted the back of each in colors that reference the materials common to the glazes of Islamic tiles — malachite, cobalt and copper. The unseen painted surface makes itself known by the intricate green-, lavender- and cranberry-colored shadows cast on the wall behind the paper. This interplay of color, light and shadow creates a seductive surface that remains just out of reach, like a secret or a memory. The work keeps something to itself, conjuring the same sense of profound presence that emanates from behind the fretwork on a Catholic confessional.

Benitez, the cultural historian of the group, uses manual drafting tools and Western perspective to create the illusion of buildings and architectural details that reference Islamic structures from around the world. His hybrid creations often appear prison-like and remote, with a geometry that seems to discourage freedom or individuality — and, in doing so, confront issues of both. With Recuerdos de 1492, Benitez delivers an oppressively empty space. He evokes the Alhambra, the magnificent Moorish palace of Andalusia conquered by the Spanish in the year of the title, but visually pairs it with drawings that elicit comparison to Louis Kahn’s Salk Institute in La Jolla, California. All is not what it seems, or at least what you thought you would see, but here you are nonetheless. Complacency, like beauty, can be its own prison.

Benitez uses perspective as metaphor for Western civilization. Preliminary Drawing for Perspective Tiles, a 2012 graphite and ink on drafting vellum, looks like so much time — or soldiers, or ideology — marching toward a horizon of diminishing perspective and powerfully evokes the tensions now present in the dualities of East-West ideologies. A detail of Julia Townsend’s papercut and wall drawing.

Korchi, Townsend and Sahebzada share the process of tracing patterns in graphite directly onto the wall behind and beside their works, creating something tangible and lasting that contrasts with the ephemeral and changing shadows behind other works. As Gower did with her color-backed works, Townsend painted the reverse of one work in Day-Glo yellow to float a citrine, jewellike shadow on the wall that shakes up the tyranny of lovely monochrome.

Amin, an Afghan calligraphist dedicated to the traditional arts of his country, inspired by Moghul and Benzad Schools of Design, and specializes in miniature painting using traditional Afghan materials and local pigments. But the work represented here is also white on white — white paper on white wall. He cuts not just the interior, but the edges of his paper as well, to create geometric shadows along the border that blur the line of real and unreal, what is present and what is past.

The work of the four artists is as lovely as it is compelling, and adds to the weight of the show by accretion. Yet, it provides no new tangent to a conversation that seems dominated by Gower and Benitez.

Don’t miss the fabulous hardcover catalog that accompanies the exhibit, and especially the illuminating essay by Sandra Bird, professor in Kennesaw State University’s School of Art and Design, whose specialties include cross-cultural aesthetics with an emphasis on the Middle East and Africa.

This is a show of work, as Benitez reminds in his essay for the catalog, in which “form and culture cannot be separated any more than the concept of sacred geometry can be split from the underlying mathematics of the universe.” In the spirit of aljamía, this exhibit examines the transliteration, visually and metaphorically, of ideas and the impact of Islamic patterning and sacred geometries across cultures.

Geometric Aljamía reminds us of the connections among our societies, and that, in an era fraught with violence and political tensions, perhaps we have more in common than many would imagine.