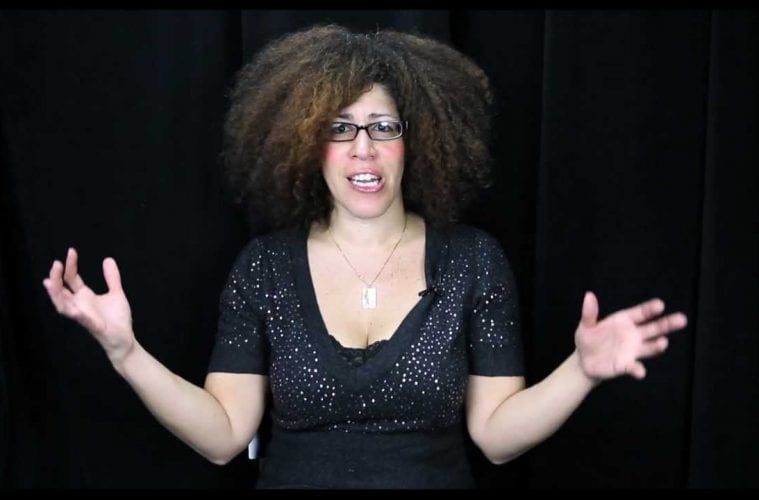 “Truth. Be who you say you are, and show up in the world as that.”

This is the most important lesson actress, comedian and singer Rain Pryor says her father, iconic comedian Richard Pryor, taught her. In her one-woman show Fried Chicken and Latkes, Pryor tells her truth about growing up black and Jewish in Los Angeles in the decades after the sixties.

Pryor was in Atlanta last November when she screened her documentary That Daughter’s Crazy at the BronzeLens Film Festival, which earned her the festival’s award for Best Actress in a Documentary.

Born July 16, 1969, she is the middle child of six, and her mother, Shelly Bonus, was an activist and go-go dancer. Her grandfather was actor/singer Danny Kaye’s manager, and her paternal grandmother ran a brothel. Pryor conjures them all in her solo performance, along with her maternal grandmother, some mean girls at school, a black beautician and a gaggle of characters who shaped her youth. A young Rain Pryor with her father.

This will be the first time Pryor has performed the show in Atlanta after its successful off-Broadway run at the Actors Temple Theatre in 2012. Presented by the Marcus Jewish Community Center and Kenny Leon’s True Colors Theatre Company, she will perform January 15 through 17 at Southwest Arts Center.

Pryor was inspired to write Fried Chicken and Latkes after Blaxploitation film actor and director Melvin Van Peebles asked her, “Why are you waiting for Hollywood to come knocking on your door? Make something happen for yourself.”

ArtsATL: Did you always know you wanted to be an actress and comedian?

Rain Pryor: I always knew I wanted to be an actress, comedian and singer. According to my mom and my dad, I was born doing this. I was given the rainbow-colored Afro wigs and the Mr. Microphone when I was little, and everyone else got their education.

ArtsATL: Do you remember your first school play?

ArtsATL: When did you first decide to write Fried Chicken and Latkes?

Pryor: I created the first versions of it in 2001, and it was more like cabaret. I started off singing a lot and I had a piano player. The music told the story and I had some jokes in between. There were people from my life in there, but it was a cabaret-esque version.

After my dad passed away, it became a theatrical piece with music in it. I talk about my dad, but that’s more toward the end. A lot of the music went away and more of the storytelling began. It’s about growing up black and Jewish in the late seventies and early eighties and dealing with those stereotypes. It’s the kind of thing, like, “can’t we all just get along?” In the sense that I want my daughter [Lotus], with her golden skin and big hair, to grow up in a world where it’s okay for her to exist. Pryor appreciates, and riffs on, her legacy.

ArtsATL: You have spoken a lot about stereotypes in your stand-up. The title of your show is based in stereotypes. How do you use the humor of stereotypes to shatter them?

RP: I talk about my Jewish grandmother. My grandmother called me up the night that Obama was elected president, and said, “Oh Rain, flower, I’m so happy for your people.” I wasn’t shocked by it. She’s an Eastern European Jew, of course she would say that. It’s not something she thinks to say as if she’s so ignorant. But, when I was called a nigger in school, my grandmother is the one who showed up to school and said, “Oh no, you won’t. That’s my grandchild.”

ArtsATL: Do you think that because your daughter’s father is black, she will have some of the same struggles as you?

Pryor: She’s already experienced in school people saying that she can’t be Jewish because she’s black, and she’s six. But, over Christmas Eve dinner, she said, “Look, mommy, everyone at the table is brown.” And I said, “Yeah, but mommy’s not so brown.” And she said, “But mommy, you’re Jewish. Your color is just invisible.” I hugged her, and I was like, “That’s my child!” It tells me I’m doing something right. She knows we come in all different shades.

ArtsATL: Speaking of growing up, let’s talk about hair. Do you bring up hair in the play?

Pryor: I take you to what it was like being a young girl trying to get a boyfriend with this hair, and then I take you to the black hair salon, and I tell you what I was told by them. That’s as much as I’ll give away. I talk about it in my stand-up as well — the black hair salon. What’s funny now is that my hair is now popular. People in school used to tell me how wild and crazy it was, and now they want to know how I do it.

ArtsATL: What do you want people to take away from the show?

Pryor: Maybe they can see parts of who they are in the piece, and then start a discussion about [race and racism]. You have all of this stuff going on in the world right now that brings out all of the racism that’s been squashed down. Everyone thinks we’ve dealt with it, but we haven’t. We just kind of laid it under the carpet and walked on it. Now it’s on the surface, and it’s bubbling up.

[Growing up] in my household, it was on the surface. It was not something I had to go into the world and discover. So when the whole Mike Brown and Eric Garner thing happened, it was like, “So this is what my parents marched for, for us to be here again?” History repeats itself. In order for my child to grow up in the world today, we have to learn to see each other as individual people. Is that altruistic? Yes. But I still believe that world’s out there.