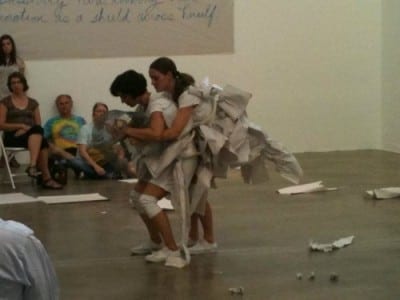 The human psyche is layered with memories, experiences and personae. In “Layers,” Nicole Livieratos and her dance company Gardenhouse Dance show how these layers can decorate, define, protect or encumber us. We put them on and take them off. Like fabric, we fold and embroider them; like thread, we tie them into knots. Sometimes we seek to accumulate more, not realizing that old ones are still visibly attached.

The dance and performance art work, presented at the Atlanta Contemporary Art Center on June 29, combined choreography, text and design. It manipulated paper like memories and was overlaid with narrative reflections on metaphorical layers in our lives. The condensed, multifaceted work was emotionally vivid, incisive, evocative and entrancing from start to finish, leaving a sensation that lingered underneath the sternum like a soft, penetrating ring. 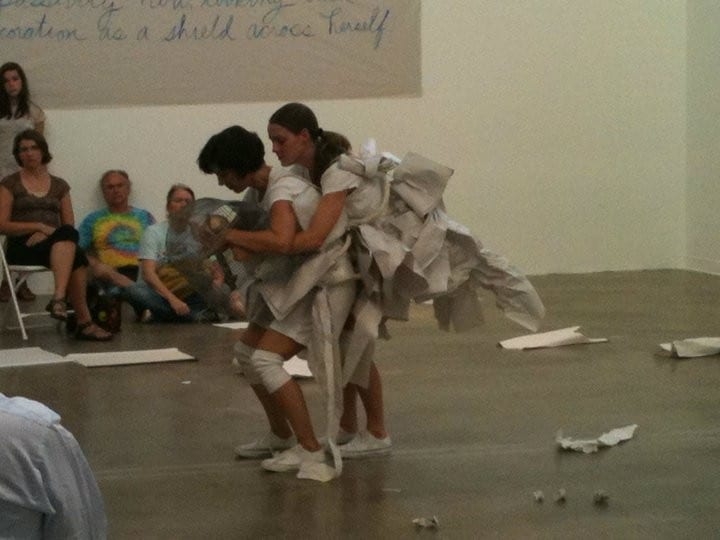 Revived from its 2007 premiere, the work was part of the Contemporary’s initiative to foster collaboration with disciplines other than the visual arts — it’s presented dance, theater and poetry to date — and to bring people to the museum between exhibitions. “Layers” fit the bill; Wednesday’s performance attracted an audience largely of artists and art aficionados. This also reflects the respect Livieratos has earned during the 18 years she’s lived and worked here. The community, almost like family, seemed to celebrate her return from a hiatus during which she, her husband and son recovered from a life-threatening car accident. She first came back with “Snippets” at her studio last September.

Fitting also was the performance space, a mostly white gallery formed by movable walls, softened by off-white, plain newsprint paper and fabric. A paper-strewn path led into an airy, intimate performance area banked by white chairs. Upstage center stood two garments, built by costume designer Robin Jones, similar to hoop skirts but worn over the shoulders and around the torso. They were embellished with wire strands and stainless steel binder clips. Down center was a small birdcage.

To the right, a thick rope made from twisted newsprint wound along the floor, rested, coiled on a windowsill, draped across a window and hung over the room’s white ceiling trusses before snaking up one side of the space — a long piece of thread. Along the left wall, in vivid blue cursive: “My grandmother never said what she thought about anything, but she embroidered constantly. … I wonder if she was stitching her thoughts down, laying decoration as a shield across herself.” 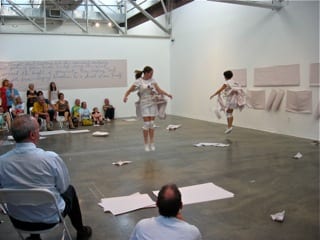 Performed by Blake Beckham and Lori Teague, the work unfolded in a succession of images and associations. Tactile images taken from the art of embroidery were overlaid with shifting points of view about the past. Dynamics progressed from deliberate and meditative, to anxiously driven, to wildly explosive, ending in reverent reflection.

Dressed in simple white cotton T-shirts, shorts and knee pads, the two women knelt on the concrete floor and manipulated sheets of paper in various ways, tearing, shredding, crinkling, stacking and wearing as skirt, neck scarf or bandage. Speaking with a sense of spontaneous discovery, they identified things of value that the newsprint represented: a family recipe, grandmother’s scratched-up mirror and even, said Beckham, “the people I don’t talk to anymore.” She threw the latter away, and they attached the others to their costumes.

There was a sense of tying, attaching and threading as they spoke of various knots, presumably used in embroidery. Fresh, unexpected movement sequences wrapped, wound, pivoted, threaded and pulled taut, and then unwound in wildly frenetic bursts, like hyperactive children, screaming like sirens, spinning, jumping as if poking the floor.

In quieter moments, the piece was interspersed with narratives, such as letters, which mused about layers as experiences, roles we play, job and family responsibilities: the things that make us who we are. There were also reflections on what we would layer ourselves with if we could choose, and what part of us remains unaffected if unadorned. 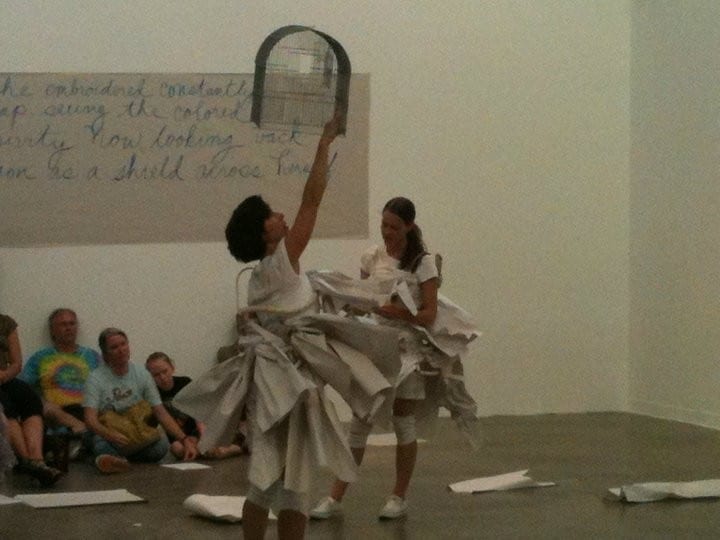 A final letter recounted the burial of a father’s ashes, describing strata as they were laid in the ground, including ashes, tulip and crocus bulbs. Teague manipulated the birdcage, first placing her head inside it. Then a dancer’s hands inside moved in circles as if working through fabric. A dancer carried the cage on her shoulder. For a moment, it evoked a coffin at a funeral, but it was light and delicate, like a container full of memories.

My only regret is that the work was shown only once. Perhaps Livieratos, Beckham and Teague can carve out a future date to perform “Layers” again, as it’s the kind of piece one hopes to experience more than once, in order to fully savor its facets and dimensions.

But Livieratos will offer other works soon. On July 30 and 31, Whitespace and Gardenhouse will present “Origami,” a 15-minute movement, text and media piece that Livieratos has developed in collaboration with writer Patricia Henritze as part of an ongoing series titled “Proximity.” It will be performed at the gallery both days at noon, 2, 4 and 6 p.m. and is free to the public. Future performances in the “Proximity” series are set for September 10, 17 and 24 at Gardenhouse Studio in Decatur.