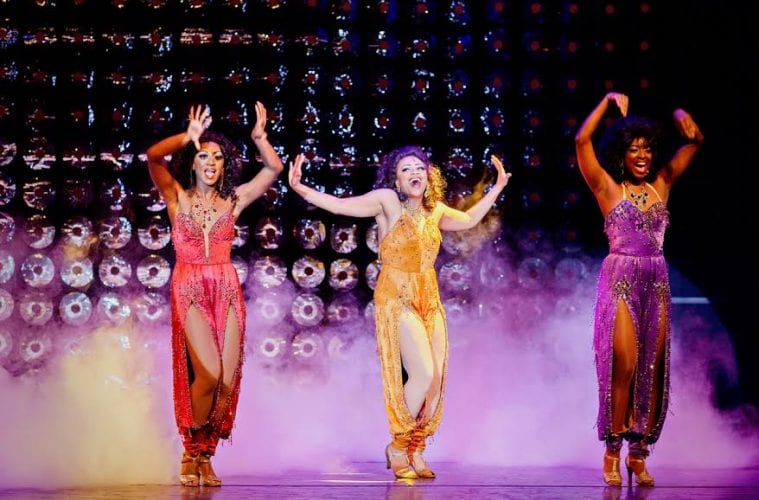 Whatever happened to glamour?

Glamour is different from The Fabulous Life Of television show or the product placement opportunity that red carpets have become, but rather something that — with fur coats, sequin gowns and diamond encrusted everything — carries a mystique that inspires dreams more than aspirations.

Nothing in American pop culture epitomizes glamour like the girl groups of the 1960s, and there’s something about watching the Atlanta Lyric Theatre’s new production of Dreamgirls, running at the Jennie T. Anderson Theatre through April 24, that conjures nostalgia for a time when women could tell men that they couldn’t hurry love while standing behind a microphone looking absolutely stunning.

In this canonic musical, which, on the heels of the Black Power Movement, dared to position black people as talented and fabulous when it premiered on Broadway in 1981, dreams of glamour propel three young women from Detroit — Deena, Lorrell and Effie — to chart-topping stardom, to the depths and then back to the top of the charts.

In 1961 the Shirelles asked “Is this a lasting a treasure or just a moment’s pleasure? Will you still love me tomorrow?” and in 1992, TLC danced with condoms on their clothes stating that, “I require plenty conversation with my sex,” both making a declaration of sexual empowerment for women, all while stupefying fans. Even today, Destiny’s Child member Kelly Rowland is hosting a reality series on BET called Chasing Destiny to search for that girl group magic, not unlike the Dreams in the musical.

Tony Award-winning costume designer Theoni V. Aldredge definitely goes for the glamour, leaving no sequin on the cutting-room floor. The gowns, fur coats and tuxedos are, in a word, fabulous. Ricardo Aponte directs a solid production, despite a fumbling start and some pacing issues on laugh lines. His finesse comes through in rotating the set pieces to stage scenes that are happening “backstage” and “onstage” simultaneously.

The show really comes to life in “Steppin’ to the Bad Side,” where music director S. Renee Clark plays with the tempo in this memorable number, and Aponte’s slick choreography is the icing on the cake. Unfortunately, the lighting design and set do not rise to the occasion (not a disco ball in sight), and often, the talented cast is swallowed by the black proscenium because there is nothing else onstage, except them.

Still, this ensemble of gifted singers hits all the proverbial high notes, for the most part. Garrett Turner as James “Thunder” Early is a better singer than actor, and comes off as more caricature than character. The character of Jimmy Early is a star with an ego and Turner’s performance makes him come off as someone mimicking a star rather than being one.

However, the Dreams do not disappoint. Lorrell (Chimere Scott), Deena (Judith Franklin), Effie (Kayce Grogan-Wallace), and even replacement Dream Michelle (Tina Fears) are equally strong singers in their own ways, and the chemistry between them is very believable. Grogan-Wallace is a standout, and makes the role of Effie White her own and she can “sang” — not sing, but sang! The audience anxiously awaited “And I Am Telling You I’m Not Going” at the end of the first act, and she deserved every bit of the standing ovation that she received.

As rooted as Dreamgirls is in the reality of 1960s Detroit and Motown, it is also a great escape into a glamorous doo-wop past. Who knows if Kelly Rowland will be able to invoke that girl group enchantment once again? But, for those looking for an immediate fix, Dreamgirls delivers a fun and glamorous night at the theater, reminding everyone that there’s power in the bugle beads.