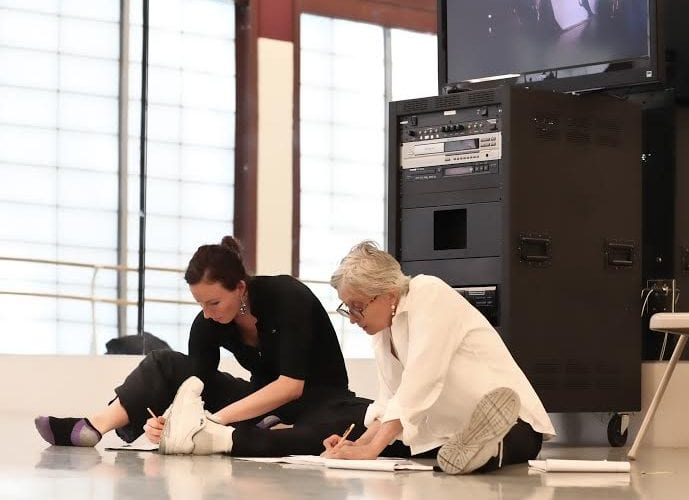 How important to the international reputation of Atlanta Ballet was its world premiere of The Princess and the Goblin by legendary dance choreographer Twyla Tharp in 2012? While the local newspaper seldom reviews the ballet’s performances these days, the New York Times sent a reviewer to Atlanta and published a full-length critique (“imperfect” but “enchanting”) of Tharp’s work.

The Princess and the Goblin — based on the 1872 children’s classic by George MacDonald and co-commissioned by Atlanta Ballet and the Royal Winnipeg Ballet — returns to the stage this weekend with performances at the Cobb Energy Performing Arts Centre. The piece again stars Alessa Rogers as Princess Irene. It was the break-out role for Rogers, who has gone on to star in Atlanta Ballet’s version of Romeo et Juliette and become one of the company’s stand-out performers. 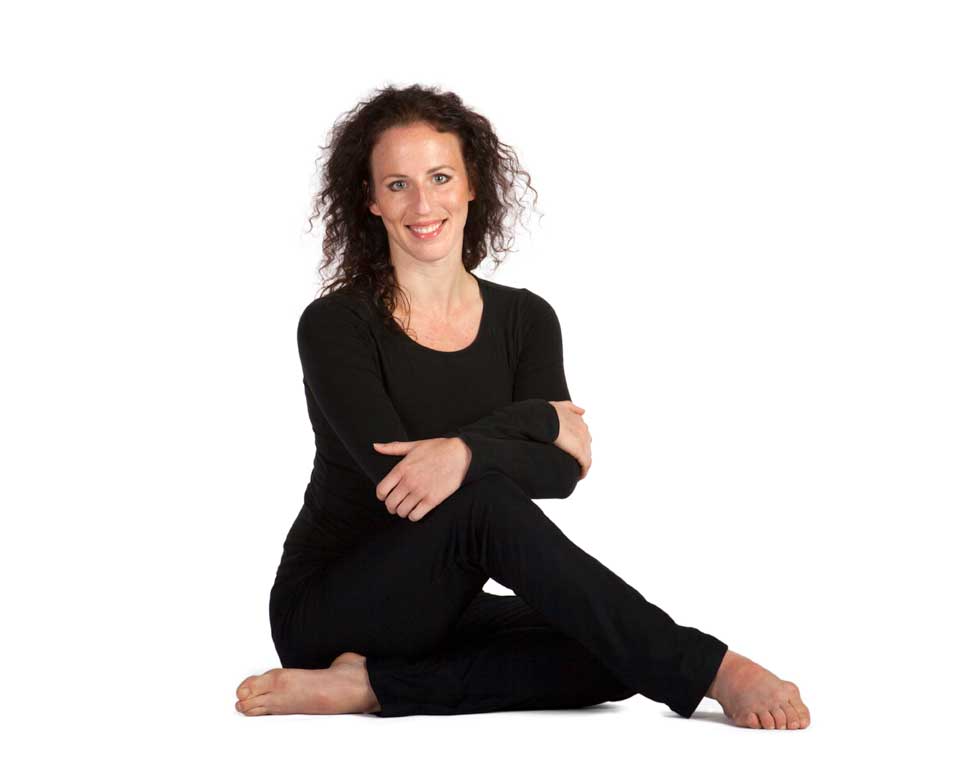 Hillmer now works as one of the company’s ballet mistresses.

Tharp, 74, did not return to Atlanta to stage this new edition of The Princess and the Goblin. Instead, Sarah Hillmer — a company ballet mistress who served as Tharp’s assistant in 2011 in Atlanta and 2012 in Winnipeg — has taken on the challenge of staging the piece on Tharp’s behalf. During that time, the two of them forged a close relationship that gave Hillmer a deep respect and love for Tharp.

An Atlanta native, Hillmer began her professional career with Atlanta Ballet, and later became a founding member of gloATL (now glo). After her retirement from dancing, Hillmer began to teach at the ballet’s Centre for Dance Education, which led to an encounter with Tharp in 2011 as the choreographer worked on The Princess and the Goblin.

During a lunch break last week, Hillmer sat down with ArtsATL to discuss her relationship with Tharp, what it meant to her to work so closely with the world’s most iconic living choreographer and the challenges of staging someone else’s work.

ArtsATL: What does someone who “stages” a ballet production actually do?

Sarah Hillmer: A stager is the choreographer’s approved voice. I speak for the choreographer. The stager has the intent behind the steps, and knows the vision of what the choreographer wants. So a stager has the entire overall picture — the acting, why people are making choices, down to the minute details of all the steps and counts, whether the step is on a six-and-a three or a six-and-a three. And Twyla is that specific. When I see our company do this ballet, I see them get in shape in a different way because she is so specific with her rhythm. That’s something she taught me, which I love. She taught me the difference between dancer counts and how musicians count. 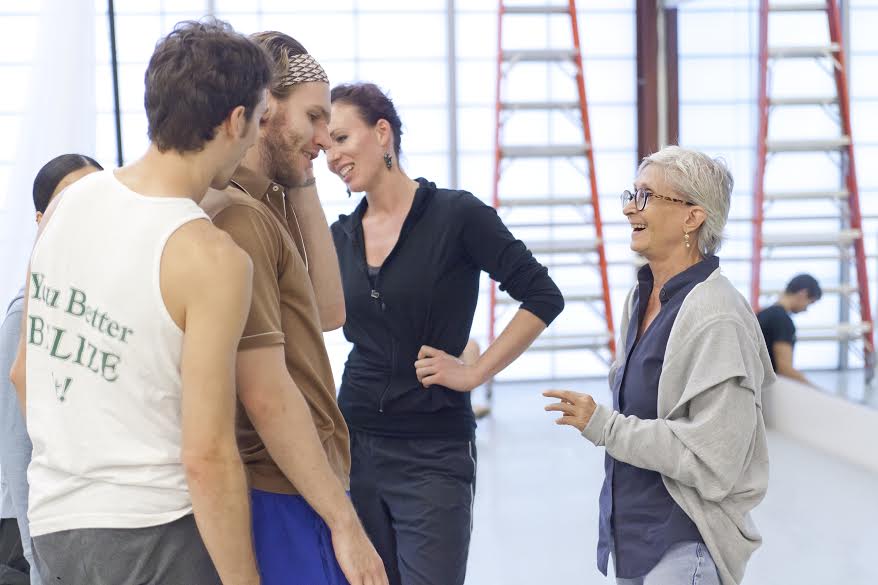 Hillmer and Tharp during rehearsals.

Right now, in lieu of Twyla not coming, I not only have to get it “in studio” ready, but I also have to deal with all the moving parts in terms of scenery, conversations with the maestro [of the orchestra] on tempos and all that. And I know that whatever choice I make, Twyla’s not here. So I have to trust that the process I had with Twyla was enough and that the decisions I make are right for the ballet.

Everything is thinking, what would Twyla want here? What choice would she make? It’s intimidating. She created the piece for the dancers in our company five years ago. Our dancers have changed; they’re better dancers than they were five years ago and there’s new ones as well. There’s a different energy and a different mix. It’s also responding to that, and letting that live and letting the dancers be who they are.

ArtsATL: How did you come to help her when she came here in 2011 to work on the piece?

Hillmer: I remember this like it was yesterday. Twyla was here that summer working with seven dancers to create the ballet. It was a Sunday and I was teaching a class. And Sharon Story, the dean of the school, said, “Oh, Sarah, is there any way you can come help tomorrow? Twyla’s going to be in the building and we’re going to have kids auditions.” And I was totally looking forward to my day off, [laughs], but I said, “I can do that, sure.”

I remember Twyla was watching me teach the kids from the doorway through one of the windows. And you can sense her presence from a mile away. After the class, she came up and shook my hand and said, “It was a pleasure to watch you teach.”

Tharp addresses the company dancers with Hillmer sitting behind her.

She had me watch a video and then teach the steps to the company. For some reason, I wasn’t intimated. I mean, Twyla Tharp is standing right there and, “Sure, I’ll teach your material to the company [laughs].”

ArtsATL: How involved were you in her creative process in creating The Princess and the Goblin?

At the end of the summer, I went to New York with her and we worked in her penthouse for two straight weeks. That’s when I became her assistant for the project. When we came back, she leaned on me more heavily as the process went on. I think one thing she appreciates about me and why we work well together is she knows I work hard and that I won’t stop until we have exactly what she wants, or what I want. She respects that.

She’s obviously a legend in the dance world, but she’s still a human being. I feel so fortunate to meet these people who are legends. And because of the intensive work we do, and the amount of time we spend together, I get to know them as people. I get to see a side of them the rest of the world doesn’t see. It is an honor, and it makes me even more terrified to do good on her ballet [laughs]. Not only is she someone I deeply respect, she’s someone I deeply care for. 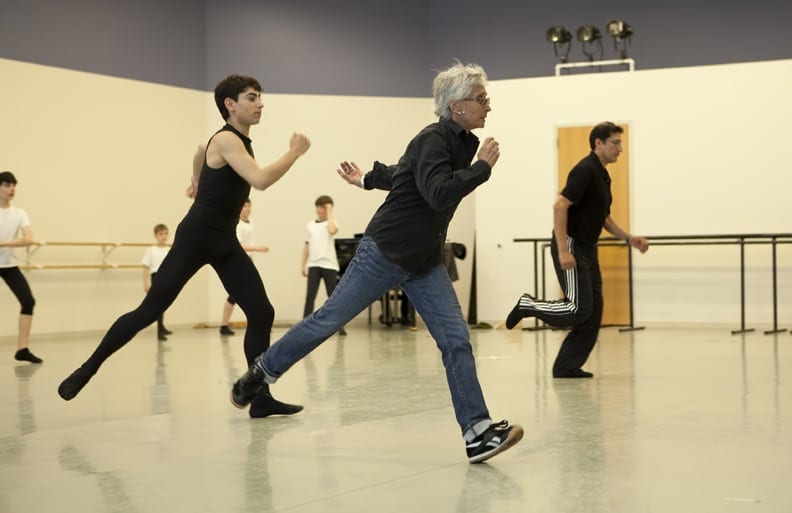 Even in her seventies, Tharp can still cut it on the dance floor.

ArtsATL: The Royal Winnipeg Ballet co-commissioned The Princess and the Goblin and you went to Canada with her to stage it there.

Hillmer: She actually made quite a few changes for Winnipeg, and made the narrative much clearer. At the top of the next year after it debuted here, we went up to Winnipeg and she just kind of let me teach her ballet the first week. I remember working in the studio, and Twyla’s just sitting there watching. That was a wonderful moment in our relationship. She would see me coach and take the lead in running the rehearsal, and she saw a different side of me. And through that, I think she saw that she could trust me more.

ArtsATL: How different will this version of The Princess and the Goblin be from the version we saw in 2012?

Hillmer: There’s lots of little things. It’s not a drastically different story, but there are certain roles that have been clarified and, for me, it makes the story sink in. You feel it in a different way. And our dancers are really good this year.

It’s Twyla, yes, but it’s also the dancers and how they’re bringing this book to life in 2016. I’m very proud of them. I see them grow through this process and be forced to be better dancers. What’s been awesome to watch is they’re all pushed. They’re pushed to their breaking point. And you access something different as an artist when you go to your breaking point. And when you go beyond it, there’s a whole chasm of possibility that is available to you. That’s what Twyla provides our dancers with. 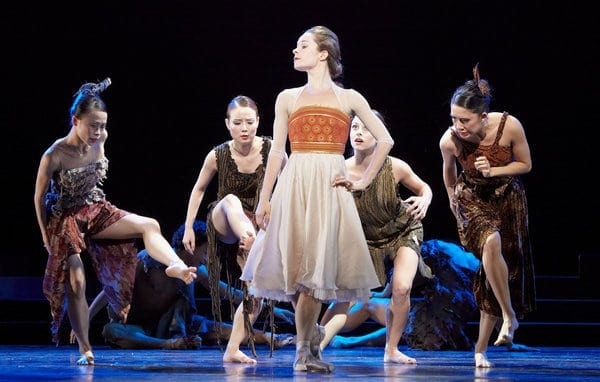 ArtsATL: Princess Irene was Alessa Rogers’ breakout role. What does she bring to that part?

Hillmer: What Twyla sees in dancers — and this is why Twyla is incredible — she sees sometimes what no one else sees. What Twyla wanted in this was someone who could really portray this character. It’s about the story. The steps mean nothing if the story’s not clear. She saw that in Alessa, and it was definitely a huge opportunity for Alessa. From that moment to here, that girl’s incredible. She’s a true artist in the sense of she takes nothing for granted. She goes beyond the work on her own. Whether it’s practicing on her own, doing a step a thousand times, doing all the research behind it or reading the character and why the character is doing what it’s doing. She’s an incredible actress. You can take a loaf of bread and say, “Create a story out of it,” and Alessa will create an entire character about it.

It’s incredible to have an adult woman play a kid, and she really embodies the youth and the innocence and curiosity and the intense reactions that come when you’re a kid and you can’t hold anything back.

ArtsATL: What surprised you in terms of what you knew about Twyla before this process, and what you learned about her from working with her?

Hillmer: A famous person is always just a person to me. I’ve never had a celebrity crush, I’m just not that person. There were certain ballets I loved that she had made, and I had mad respect for her. I have a deep respect for contemporary ballet. And seeing how she was able to merge her modern dancers with ballet was incredible. When I got to work with her, it was, “Oh, so this is why you’re so great.” 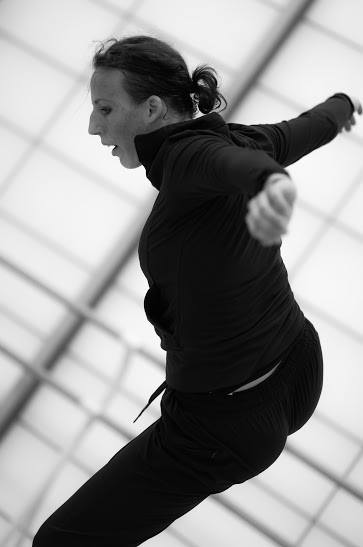 She’s also a genius. That’s where I got a little starstruck, she has 19 honorary doctorates. Something else about her, and this is rare in choreographers, is her ability to edit her own work. When we created the ballet, we’d look at the footage every day. We had a separate hard drive — the Twyla Hard Drive. We’d go in the morning and start looking at scenes. And she’d say, “This doesn’t work here, we need to take this out, we need to beef this up.”

My respect for her goes very deep. She’s very wise. There’s no bullshit. I think that’s why we connected as well. I tell it like it is, and she would tell me like it was. She just demanded the best, and she demands it of herself. I saw that in her penthouse, she would get frustrated with herself. She’s a tough boss to herself.

ArtATL: You’re dancing again June 3 and 4 with Staibdance at the Performing Arts Studio. What brought you out of retirement?

Hillmer: I’m rehearsal director with them, and I’m going to dance. George [Staib] is such a welcoming, open, honest, curious artist. It’s a world of dance I love because we go into the studio and there’s lots of space to experiment and figure it out as a team and individually. I’m not putting on the pointe shoes; I’m dancing in my bare feet. And it’s special when you’ve given it up for a long time. I had no desire to be a dancer again. It actually freaked me out, disgusted me. Like I fell in love with teaching, I somehow fell back in love with me dancing [laughs]. It’s good. It means when you give yourself absolute rules in life, those rules are meant to be broken.