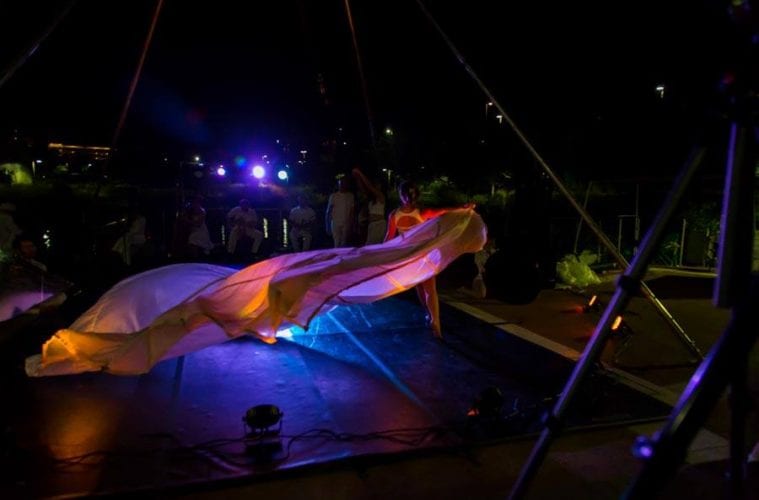 When attending a performance at Atlanta Symphony Hall, one seldom sees David Coucheron warming up his violin on the stairs or Robert Spano swinging his baton in front of the bathroom mirror. Furthermore, you may never see Angel Olsen strumming her guitar in front of the Earl. But as I approached the 7 Stages Theatre in Little Five Points, I was greeted by music.

It was clear: a musical performance was soon to begin. Michael Durham serenaded street walkers with his alto saxophone outside of the venue. At the ticket office, Christopher Salmon plucked a banjo.

The tone of the evening was set upon arrival, and the performance of Flight of Swallows — an ensemble that performs a collection of structured improvisations accompanied by interpretive dance — promised to be unique and immersive.

Flanked by dancers, pseudo-concertmaster Deisha Oliver-Millar provided the warmth of a cello performance as attendees skirted her into the restrooms. Toy piano guarded the performance hall. People inquisitively gathered at the ticket booth for banjo, the restroom for cello and at the stage entrance for toy piano. Once the gate was moved aside, attendees and performers entered the stage area together. As concert attendees took their seats, certain members of the band were already playing and eventually joined by the remaining musicians in a major seven drone wafting through the air. Cello, lap steel, harmonium and violin created the pad on which flute and alto sax danced.

Suddenly, a member of the audience was induced to dance. A woman confidently and adeptly took wing in front of the band. The audience was in awe. I, too, was surprised until I remembered that T. Lang, Chair of Dance at Spelman University, was supposed to join the performance that evening. She sprung into the musical atmosphere as if rehearsed and engaged the audience fully.

It was an arpeggiated harp that proclaimed the next song. Then a pulsing cello bass line in D minor transformed the room into a rollicking jazzy jam featuring a steady harp performance and bouncy flute solo. Suddenly 7 Stages Theatre was transformed into a smoky Havana bar, the audience in pursuit of sinister company. As soon as the mood had taken hold, the band shifted us away to the positivity of G major.

As the sweeping performance came to a droning end, Deisha Oliver-Millar looked up to the audience with a welcoming smile as if to say, “That’s it. What do you think?” The audience smiled, clapped and acknowledged the fluid performance of the last three pieces.

Oliver-Millar and dancer Sadie “Hawkins” Simons stood and greeted the crowd with appreciation and gave a brief explanation of the evening’s performance and shared that the night would celebrate the lives of passed former collaborators, as Flight of Swallows has proven to be an ever-shifting and transmogrifying group of musicians in Atlanta.

The declaration of an intermission was broken by guitarist George Kotler-Wallace raising his hands in the vague shape of an A and saying there was time for one more “in A.” All the musicians made different variations of acknowledgment: an audible “okay,” the positive shake of heads, the hum of an A-note from their instrument. The harmonium provided a soft bed on which all the other players rested.

After this song, the band performed a highlight, cinematic A minor piece, driven by the harp that felt like walking into a cold night and seeing the moon for the first time. By looking up to the moon, the dances of angels could be seen high above the room. Simons and AnnMarie Spexet, who provided masterful, intuitive dance routines throughout the night, seemed precariously perched on the scaffold and raised stage in the performance hall. They balanced above the audience with a strong ferocity, in addition to occasionally commanding the performance of the music from the center stage. Their outfits changed song to song in a complementary fashion that kept the audience intrigued and captivated.

The chirp and chatter of a frenetic cello loop and flutters from flutes filled the room with the sound of swallows. A comfortable, calming drone filled the room. And again, Deisha Oliver-Millar looked up with a familiar smile that announced the end of the show.

Over seven years, the Flight of Swallows has changed lineups and played uncounted shape-shifting pieces, but after this time they performed a compelling, dynamic show that included and led the audience down a truly novel, improvisational performance experience. This evening’s performance featured Renee Nelson on the harp and toy piano, George Kotler-Wallace playing lap steel and guitar, Deisha Millar on cello, Stephanie Francesca Kohler on harmonium, Christopher Salmon on fiddle, Rasheeda Ali on flute, Trish Chenard on the singing saw, and Michael Durham on the saxophone and flute. Performing alongside them were dancers Sadie Hawkins, AnnieMarie Spexet and Ryan Mathern, along with a special performance from T Lang and projections by Kris Pilcher.

In the words of Deisha Oliver-Millar, “Tonight was all by the seat of our pants . . . we do fall apart, but we find our way back together . . . [We] hav[e] the freedom to totally screw up but recover or really get back into the conversation, so it’s not a cacophonous mess. That’s all we are doing up there is talking to each other and enjoying the conversation.”