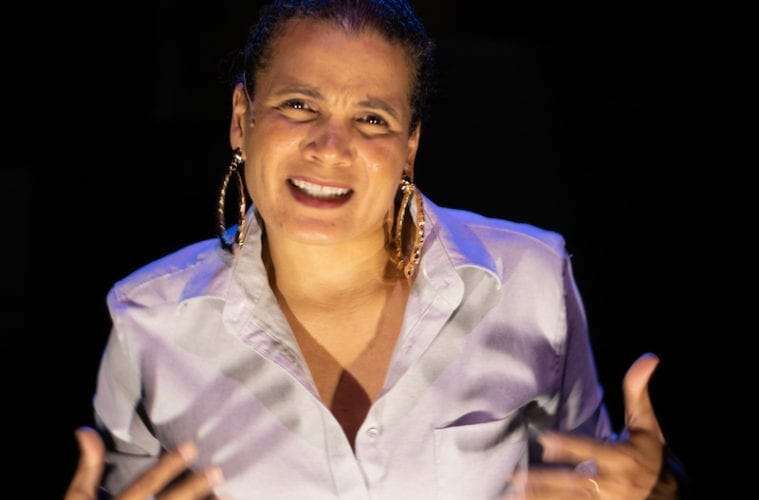 January LaVoy, the sole actor in "Fires in the Mirror," plays 20-plus characters -- men, women, young, old, the famous and the everyday, Black and Jewish. (Theatrical Outfit photos by Courtney Greever-Fries)

Review: “Fires in the Mirror” proves as relevant today as it was 30 years ago

It was dusk on a Monday — August 19, 1991, to be exact — when a car driven by a Chabad Hasidic Jew ran a light and veered onto a sidewalk in Crown Heights, Brooklyn. A 7-year-old Black boy was killed, his cousin injured. A few hours later, some 20 Black men attacked a 29-year-old Jewish doctoral student from Australia. They stabbed and beat him, fracturing his skull. He died soon after.

Four days and three nights of race riots and clashes with police followed. When it was over, two were dead, 152 police officers and 38 civilians were injured, and 129 people were arrested. 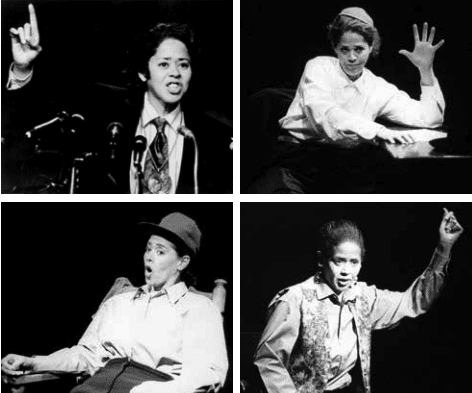 Anna Deavere Smith, in scenes from “Fires in the Mirror,” conceived, wrote and originally performed the documentary-theater piece.

These events are the jumping off point for Fires in the Mirror, Anna Deavere Smith’s epic piece of documentary theater (livestreaming from Theatrical Outfit through June 27). The script calls for one actor to play 26 roles — men, women, young, old, teenaged, the famous and the everyday, Black and Jewish. Originally, that actor was Smith herself. At the Outfit, it’s January LaVoy (the Alliance Theatre’s 2014 and 2017 Native Guard).

LaVoy does yeoman’s work simply in memorizing the many words, lines, recollections and opinions she’s called on to relay. Ditto for quick changes. She’s less successful in drilling down to the essence, the specifics, of each character, all of whom are based on a real, flesh-and-blood person.

She wears a basic white long-sleeved, buttoned-down-the-front shirt with blue or black pants (the moody lighting makes it hard to tell). The addition of a  jacket, headscarf, piece of jewelry or prop, plus projections, delineate different characters. It’s the actor’s responsibility to make each individual come alive.

LaVoy does that on occasion — her portrayals of an anonymous Jewish woman from the Lubavitcher sect and rapper Monique “Big Mo” Matthews are particularly spot-on. With the former, in a monologue titled Static, a bewigged woman in her mid-30s who chats while folding clothes. The dilemma: Her baby, who’s been playing with the stereo, has turned it on and . . .  it’s REALLY LOUD. Since it’s the Jewish Sabbath, the Torah forbids her — or any other Lubavitcher present — from turning it off. She eventually finds a creative solution, and relates her tale with humor, in a very Brooklynese-accented pinched voice. The Lubavitcher woman is memorable. 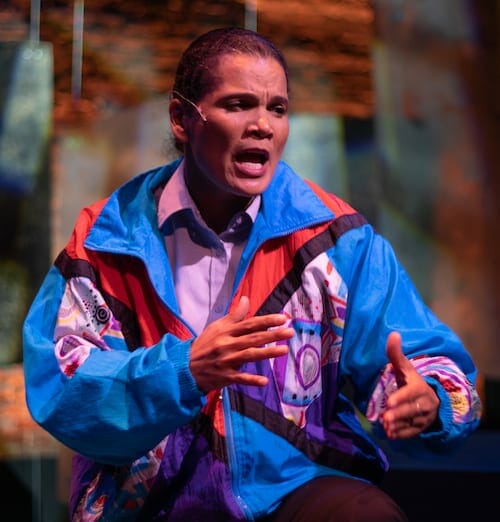 In Rhythm and Poetry,  LaVoy plays Big Mo, a Los Angeles rapper, with the bravado of a strong and confident Black woman, sure of her mission, not afraid to speak out. She often jabs the air to make a point, using a slightly deeper voice and a street accent. Big Mo is memorable, too.

We’re “in” the theater, so of course some suspension of disbelief is called for. Still, it’s often hard to buy LaVoy as a man. If it’s not possible for her to deepen her voice, she could do more with a gesture here and there and a shift in posture. She’s much more convincing as a Lubavitcher woman, than say theater-maker George C. Wolfe or the Rev. Al Sharpton. Her body language and facial expressions tend to have a safe sameness to them.

Perhaps her work has more depth if seen in person, but we must deal with what COVID-19 has given us, and that’s theater-by-screen. At least Fires in the Mirror, subtitled Crown Heights, Brooklyn and Other Identities, is happening LIVE as we watch (videography by Felipe Barral, an occasional ArtsATL contributor). 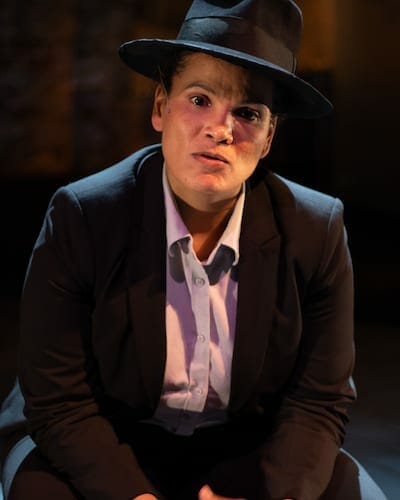 We might also question the wisdom of having the drama’s only actor as its codirector (as LaVoy is here with Adam Immerwahr of Theater J in Washington, D.C., which will stage Fires, with LaVoy in June 2022). Too heavy a workload for one person? Maybe?

Fires in the Mirror, the final piece in the Outfit’s 2020–21 season is, in fact, the only one of six shows planned to actually REACH the stage. Artistic director Matt Torney and his Outfit team deserve props for getting it done.

What’s most stunning about Fires in the Mirror, Torney says in his program notes, “is that, despite being 30 years old, it feels incredibly relevant to everything we are living through in 2021.” He cites the pandemic and the racial reckoning that began last summer and says the piece “touches on themes and questions that are in the headlines every day in startling and vivid ways.”

He’s so right. If only these fires burned more brightly. In the end, the fragments of this Mirror never quite coalesce.