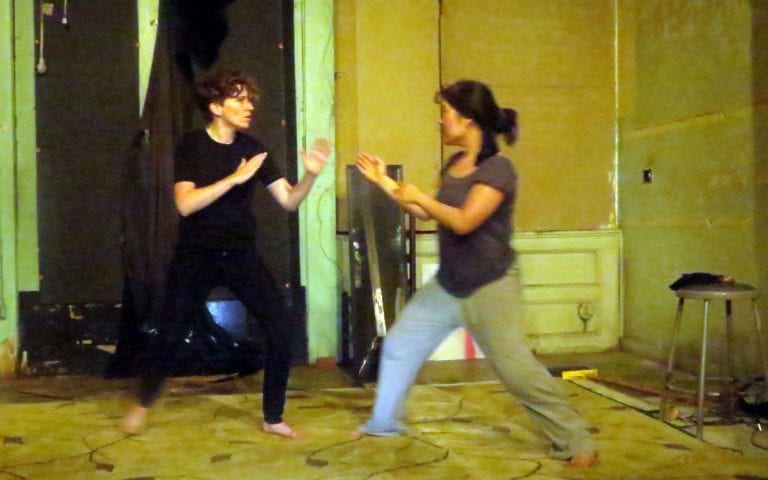 Review: Eyedrum’s “How to Fight” puts unique twists on movement, song and text

On Sunday evening, Eyedrum Art and Music Gallery was host to the world premiere of “How to Fight” by composer Carolyn Chen and percussionist Jennifer Torrence. Billed as a “new work for body percussion duo,” Chen and Torrence developed the 50-minute performance piece from scratch during a two-week residency at the Hambidge Center in Rabun Gap, just before bringing it to Atlanta for its debut.

Chen and Torrence met at University of California, San Diego when their respective time there overlapped by one academic year. Although they have performed with each other before, “How to Fight” is their first full-fledged collaboration as a duo, sharing credit for both its composition and performance. Chen currently lives in Pasadena, California, while Torrence, who grew up in Marietta, now lives and works in Oslo, Norway. Given the sheer geographical distance between them, the Hambidge residency was essential to developing “How to Fight.”

The duo arrived at Hambidge with only the topic for the work in place. Over the course of their two-week stay, the work developed into something beyond the premise of a work for body percussion to a broader performance piece also involving spoken monologues, two-part songs and extensive movement. The movement is not dance with an aesthetic goal of beauty; rather, it is drawn from pedestrian motion, common cultural body language, tai chi and aikido, and what seemed in some instances as implied animal behavior.

Some of the monologues were accompanied by unrelated movement by the other performer; some were delivered in the dark. These two kinds of treatments were spelled out in one of Torrence’s monologues without specifically referencing them — how if we deliver a message in words alone, typically 10 percent is retained; in actions alone, perhaps 20 percent. But with words and actions combined, people tend to retain 80 percent of the message. The interplay of delivery, in light and dark, with related and unrelated action, as well as when sung versus spoken, helped keep the attention alive, as did the occasionally surprising transitions between segments, encouraging the audience to not expect the easily predictable.

Constructed somewhat loosely in the manner of a temporal collage, “How to Fight” was able to shift quickly among different aspects of its theme, addressing both the nature of conflict, its successful execution and its avoidance, and not just in human terms. In one segment, Chen and Torrence sat center stage, facing each other, alternating vocal screeches like territorial tropical birds, defending their roosts with their cries. Torrence was by far the louder and more strident in avian screaming. Some of the sung texts also specifically addressed animal responses: both those who flee danger and others who play dead such as the opossum, the fire-bellied toad and the cichlid fish.

Overall, the performance revealed some of the duo’s respective differences in performance personality. The mercurial Torrence ranged from a placid calm to hot-tempered; Chen was a focused energy under a more reserved surface. One could easily step out on a limb and risk respective comparisons to the principal male characters in Shinichirō Watanabe’s anime Samurai Champloo, the impetuous swordsman Mugen and the composed rōnin Jin.

The work’s perspective on conflict seems to be summed up by its penultimate segment, in which words drawn from ancient Chinese military treatise, “The Art of War,” are sung:

The supreme art of war is to subdue the enemy

One wins who knows when to fight and when not to fight.

The concert concluded with a scene that was blacked out, with the exception of small flashlights held in the performers’ right hands while doing stylized movements reminiscent of an early section with illuminated stage. The ending offered a sense of rounding off the otherwise collage-like structure of the work.

Despite the limitation of global distance between its creators, “How to Fight” is an intriguing work that deserves another chance at performance soon, before a larger audience in a different, slightly larger and theatrically-equipped space. Unlike its previous incarnation, the current Eyedrum is a pocket venue with limited seating. Even so, the show drew only an intimate audience, with attendance hampered surely by the scheduling on a major holiday weekend.

Preceding the performance of “How to Fight,” Atlanta composer Olivia Kieffer performed a dozen selections from her collection of miniatures for toy piano, “The Texture of Activity.” Kieffer, who was also operating lights for Chen and Torrence, was a last-minute addition as a preamble to the program, presumably to provide another 15 minutes of music to flesh out the concert’s overall length a little. Each movement, about a minute long, is dedicated to a friend, family member or colleague. The music’s mostly optimistic post-modern feel was a suitable appetizer for the main course to come.