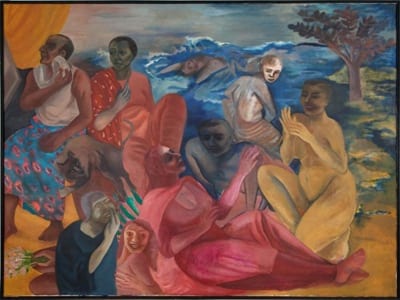 In 1947, India became a new country — free and hopeful, yet traumatized and mutilated at the same time. The last ships of the British Empire sailed away, vast territories were lopped off at partition to form West and East Pakistan, and a million people were killed in murderous violence between Hindus and Muslims. This bloody year of liberation gave rise to India’s modern art movement.

Three heroes of Indian modernism — M.F. Husain, F.N. Souza and S.H. Raza — founded the Progressive Artists Group in Bombay, a fiercely vocal, combative bunch who rejected the academic painting of the colonial art school as well as what they considered a sentimental return to folk art by their contemporaries in Bengal.

The seething new visual vocabulary that the Progressives pioneered, as they grappled to describe an evolving identity, and the eclectic pictorial language developed by successive waves of young painters is the exhilarating story told by “Goddess, Lion, Peasant, Priest: Modern and Contemporary Indian Art From the Collection of Shelley and Donald Rubin,” on view at Oglethorpe University Museum of Art through May 15.

With meticulous intelligence and flair, curator Rebecca Brown, of Johns Hopkins University, has drawn more than 50 works from the Rubins’ impressive collection. Her emphasis on figural painting underscores the obsession of Indian art for millennia, the figure never losing its centrality to abstraction as it did among European modernists. There are many gorgeous works here, pictures both serious and lushly decorative. Though few would be considered major paintings — the Rubin collection doesn’t match the luster of the works amassed by the late Chester Herwitz, the foremost American collector of Indian modernism before it skyrocketed on the world market — they constitute a small, stunning survey of Indian art of recent decades. (At left: an untitled 1992 painting by Gogi Saroj Pal.)

Many of the artists on exhibit studied in Europe and retained particular influences. A few, such as Sakti Burman, a stunning draftsman, settled abroad to be closer to the sources of modernism, and their canvases bear the hybrid imagery of two cultures.

The surprising subtext of this dynamic narrative of tangents is the ascent of women artists such as Nalini Malani, Arpita Singh, Arpana Caur and Gogi Saroj Pal in the 1980s, with Malani and the younger Mahjabin Majumdar providing two of the show’s most magnificent paintings.

“My main interest is the beauty of the individual work of art,” Donald Rubin says of his collecting philosophy. An Oglethorpe alumnus, Rubin has been a longtime admirer of the South Asian aesthetic. He and his wife Shelley founded the Rubin Museum of Art in New York in 2005, showcasing a separate collection of Himalayan spiritual art. In a number of their modern Indian pictures, artists confront or reconstruct ancient motifs, just as in Indian streets and towns centuries-old structures, sacred trees and Vedic rituals collide with the chaos of contemporary life.

In Husain’s emblematic “Shakti” (at left), from 1979, a bare-breasted warrior-goddess rides atop a mythic tiger that leaps up and bares its teeth. It’s the kind of Cubist-influenced image that critics have long disparaged as derivative. But Husain — India’s flamboyant, bearded Muslim prophet of modernism, the country’s most celebrated artist until he was recently driven out by Hindu fundamentalists — is a prolific visionary who cannot be reduced to a simple translator of Picasso. His hand makes something savagely new of this quintessentially Hindu image of female power by shattering planes and contorting limbs, offsetting earth tones with inspired bursts of lemon yellow and indigo.

Husain’s portrayal of women, such as the somber figure in the early “Untitled” (1955), has become a kind of visual paradigm for Indian womanhood. For decades this type of flat, dark, elongated female, projecting an inner sadness — though Husain also imagined more animated women — has symbolized the rural Indian woman. Withdrawn and suppressed, it seems, by the weight of traditions that deny her free will — arranged marriage, domestic life — she is a mute figure whose ghost continues to thrive in the portraits of countless kitsch painters.

The rhythms of village society captivated not only Husain but an entire generation of midcentury artists. When Gandhi proposed a revival of village republics as the future path for independent India, few were immune to the romance of his vision. “Under the Shade” (1958) by Shanti Dave (above) is a jewel of a picture, a magical-realist view of a party of villagers riding a bullock cart beneath the spreading branches of a tree alive with birds. It’s only on second take that you realize that the artist has paved the road the cart travels on with real cement amid the radiant colors and textures of his fabulous forest, thrusting modern India through a collective dream of paradise.

A half-century later, Mahjabin Majumdar’s longing for the watery landscape of rivers and deltas of her native rural Bangladesh is expressed in the stunning and monumental 2007 self-portrait “Skin Grafted” (at left). The magnified image of her face, lost in blank reverie, is surrounded by various species of birds and abstract shapes such as islands or clouds, the self and landscape rendered as one coherent image in mottled green and orange, with miniature inky trees rooting in her visage as well as the land forms that appear to sprout out of her. Majumdar’s vision wields power for being psychological and intimate while at the same time elusive; it keeps some secret to itself.

One of the most compelling pictures in the show is Nalini Malani’s 1985 narrative tableau “Love, Deception and Intrigue” (top image), a composition reminiscent of Manet’s “Déjeuner sur l’Herbe,” though more crowded, its clusters of clothed and unclothed figures engaged in several vignettes. Here, a solidly traditional middle-class Indian couple shares space with others who might be figments from myth or art history or another character’s memory, bodies smoothed and slightly blurred by Malani’s light brushstroke, which can make oil appear as sheer as watercolor.

Malani’s narrative inhabits both social reality and fable, just as its setting seems to be several places simultaneously: the sea, a park, the interior of a home. Glancing away from the water to view a group of people behind her, an androgynous figure, presumably a Hindu widow, bare-breasted, her head shaved, is a distressing observer. Is she a woman looking back on the dramas of her earlier life? On the goings-on of society? Perhaps. In the sea’s choppy water, Malani plants a more voluptuous bare-breasted woman who appears as if she’s about to be consumed by waves. A suicide? A figure of liberation?

As an art student in the 1960s, Malani illustrated short stories to earn money, and perhaps her early involvement in narrative spawned this cunning ability to create suspense in a visual image. You struggle to invent a story linking the various relationships in the picture. But there is no one story. Many stories are implied — marital tensions, memory, gossip, a death wish. In her ease in referencing Western art history, the cosmopolitan Malani has risen to become one of the most successful Indian artists outside India, celebrated in solo museum shows in the United States and Europe. Even in this canvas done a quarter-century ago, she demonstrates an uncanny talent for cross-pollinating genres, traditions and cultural motifs to tease the viewer into the mystery of weirdly converging cultures, a mythos of unrelated figures juxtaposed in such a way that they seem to speak to one another.