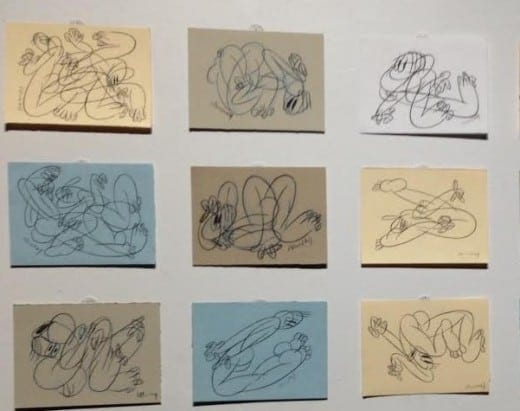 Ephemeral Memorable, at Mammal Gallery through May 8, celebrates DIY culture with an array of zines, wheat pastes, cassette loops, performance art and projection-based pieces by more than 30 artists of various media, ages and places.

Curators Chanel Kim, Allie Bashuk and Amanda Mills define Do-It-Yourself (DIY) as a method of creating work wherein the maker is directly involved in production and distribution. It is ephemeral, says Mills — executive director of Murmur Media, which provides resources for creating and distributing DIY artwork — because it is not produced on a mass scale. Artists create a handful of zines or custom patches to sew onto totes or jackets, for instance, and when they’re gone, they’re gone.

This logistical matter induces philosophical issues: if the art is going to more or less disappear, why make it at all? And what does one make it about? These concerns lead many artists to create work specific to its particular moment in time, or about the nature of ephemerality itself.

For example, Anna Simonton displays a map of Atlanta to which viewers can pin slips of paper detailing what certain places mean to them or what they used to be. It’s akin to an analog, sentimentalized version of the “drop pin” feature on Google Maps: instead of revealing the user’s exact location, the pin reveals a memory of where she once was.

Shelved on the wall surrounding the map is a children’s viewfinder toy loaded with pictures of Atlanta landmarks iconic only to those prepared to mourn their imminent demise: the smokestack on an old mill; the sign for the long-defunct Atlanta Dairies plant. A pamphlet names each of the locations shown in the viewfinder alongside information about the role these buildings, and the people who used them, played in Atlanta’s history. Colorful, abstracted but action-packed sketches like those by Jason Murphy and dreamy, meme-y computer-generated cartoons by Madeline Friedman represent the DIY ethos. Their quickly rendered stories capture moments of silliness and anxiety that burst into visual expression.

Murphy aims to capture awkward scenes from absurd stories based on fear and incompetence, while Friedman seeks to answer questions such as “Why do I feel so bad? What if life is never worth living again? Why is she looking at me like that?” Had these works been completed in a more traditional manner, they might not be as fun and instantly relatable, perhaps losing their angsty urgency in the translation.

Several works challenge the notion that DIY is synonymous with ephemeral. Among them is Atlanta artist Rachel K. Garceau’s series of porcelain and steel umbrellas, which hang from the ceiling. The immense skill and time required to create these handcrafted works and prohibitive cost of producing and purchasing them leads me to question whether it belongs in this show.

In contrast, several of the performances were so fleeting that many audience members didn’t even realize they were happening. Henry Detweiler’s opening night performance “What We Talk About When We Talk About Me” placed him at a corner of the upstairs bar. He interacted with one audience member at a time, buying the participant a Gin Rickey and fielding questions only about himself. Jane Garver: “(Not) Going to Your Opening”

Jane Garver’s performance installation piece “(Not) Going to Your Opening” had a stronger physical presence — she created a bedroom set combining halved nightstands and three small beds in a corner — but people politely skirted the “bedroom” where she and two others lay in bed watching movies on various media devices. Perhaps they were uncomfortable with intruding on this seemingly private activity. The reaction was fitting, though, in making the performance feel barely-there.

Ordinarily ephemeral art is presented in such a way that finding it feels fated: a friend passes a tape along, or you find a zine at the record store where you intended to buy an album or someone at a party doodles in your notebook. The large number of works here and their formal presentation do not allow the viewer to develop the more typical personal and serendipitous relationship to a DIY work, but the exhibition serves perhaps a higher purpose. By showing the wealth of DIY works available in Atlanta, the curators not only demonstrate the wealth and variety of Atlanta’s DIY arts but also encourage the continuation of the practice.

On home page: A detail of installation of drawings by Jason Murphy.