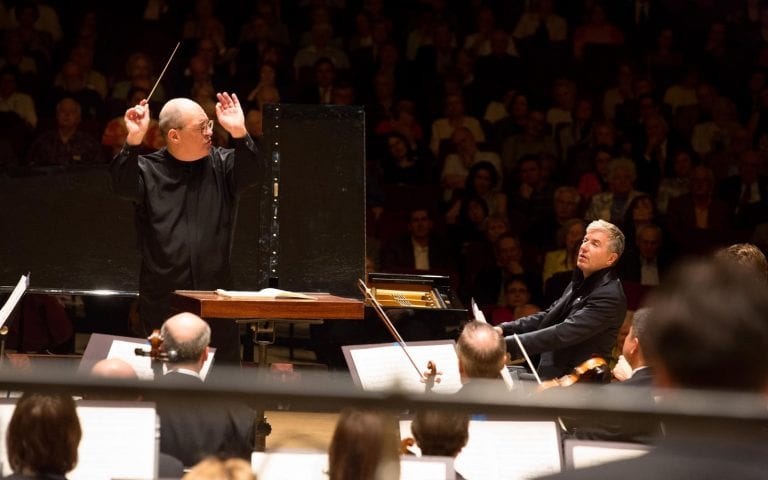 A truncated program, minus the Gandolfi, was performed early Friday evening as one of the ASO’s “First Friday” presentations. The complete program will be performed again Saturday at 7:30 p.m. at Symphony Hall.

The concert opened with the world premiere of “Imaginary Numbers” by Michael Gandolfi, one of the ASO’s Atlanta School of Composers group. The work was commissioned by Paul and Linnea Bert, longtime advocates of the Memphis Symphony Orchestra, in honor of their longtime friendship with Spano and his parents, Dede and Tony Spano.

Commissions do not fall from the sky. They are the result of human encounters and developed relationships. “Imaginary Numbers” was not Gandolfi’s first commission from the Berts. They commissioned his “Fourth Chickasaw Variations” in honor of the MSO’s 60th year. It was premiered by that orchestra in April 2013, and will be performed by them again in January 2016.

The last time a work by Gandolfi was commissioned by the ASO itself, it was his clarinet concerto, “The Nature of Light,” which premiered in January 2013 with ASO principal clarinet Laura Ardan as soloist. In October 2014, Ardan performed it again with the Memphis Symphony Orchestra in one of their Paul and Linnea Bert Classic Accents concerts, a series inaugurated in September 2012.

“Imaginary Numbers” is a sinfonia concertante — a hybrid of the classical symphony and concerto, in that while soloists are on prominent display, they are still appreciably an extension of the ensemble rather than contrasted sharply against it as a musical force. The four performers in the solo group were ASO principals Elizabeth Koch Tiscione (oboe), Laura Ardan (clarinet), Brice Andrus (French horn) and Keith Buncke (bassoon).

The choice of those four concertante instruments was specified in the commission itself, to acknowledge the friendships of the Berts and Spanos. Linnea Bert and Dede Spano grew up together playing bassoon and oboe, respectively, in bands and orchestras. Paul Bert also played oboe early on. Tony Spano was a clarinetist. All four loved the French horn. Thus the four solo instruments.

The title, “Imaginary Numbers,” comes from Gandolfi’s love of math and physics, and a play on words: a “number” also meaning a musical selection, often a dance. The first movement, “Sky and Water,” was inspired by a 1938 block print on Japanese paper by M.C. Escher, which depicts geese flying in formation that smoothly morph into fish as they descend into the water below them. In a somewhat similar manner, Gandolfi posits a rhythmic pattern which morphs in two basic ways, shifting between a “pulsating” and a “swinging” form.

The second movement, “Due Misteriosi,” juxtaposes the playful and the mysterious within a carefully traced symmetry that included a turbulent central section. The title of the third, “Hymn of the Five Suns,” references creation-destruction myths of indigenous peoples of Mesoamerica.

The choral-like music served as a respite from the paces of the other movements, allowing passages where the soloists’ individual voices came to the fore. The final movement, “Mandelbrot’s Rondo,” was what Gandolfi himself refers to as “a fast-paced romp,” giving soloists and the orchestra good opportunity to display their technical prowess.

Igor Stravinsky’s suite from his ballet,”The Firebird” followed — the 1919 version. The performance did not feel quite as full of Stravinskian energy as it usually does until the popular “Finale,” which made it a rousing conclusion to the first half of the concert.

French pianist Thibaudet last teamed up with Spano and the ASO in May 2013, performing James MacMillan’s Piano Concerto No. 3.

This time he thrilled the audience with a major early 20th-century masterwork, Maurice Ravel’s Piano Concerto in G major, which was significantly influenced by the jazz that Ravel encountered in 1928 while on a U.S. concert tour. Ravel finished composing it in 1931.

While he was in New York, Ravel and American composer George Gershwin would go together to hear jazz performances. What better companion for Ravel’s concerto than Gershwin’s own rhapsodic musical travelogue, “An American in Paris,” to follow and close the concert? The music, which evokes the modern energy of Paris in the 1920s, was a great American showpiece and a happy ending to the evening.