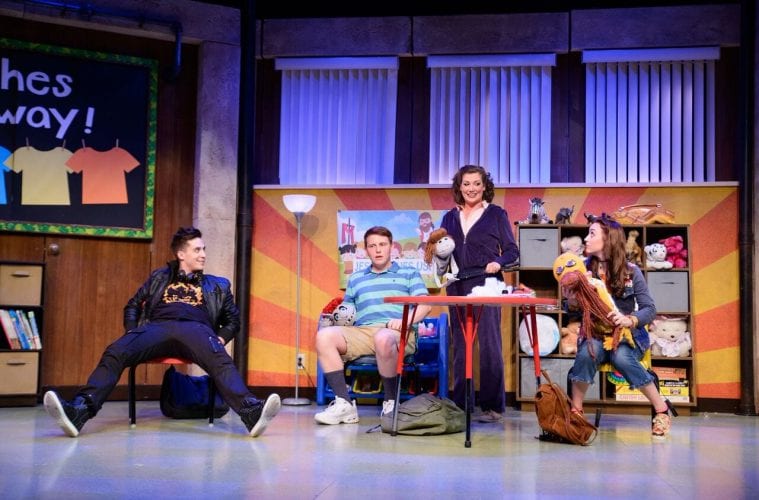 It may be empty calories, but Alliance’s Hand to God has shock value humor

There’s technically only one actor on stage for many of the most memorable scenes in Hand to God, playwright Robert Askins’ hit comedy currently having its Atlanta premiere through November 12 at Dad’s Garage as part of the Alliance Theatre’s 2017–18 on-the-road season. The fact that he’s alone tends to recede from view, however, thanks to the skill of the actor, Ben Thorpe, and the thoroughly nasty, outrageously combative hand puppet he operates on his arm.

The puppet, called Tyrone, isn’t just any old sock monkey. Although he was designed by Thorpe’s character Jason for use in his small-town church’s children’s puppet ministry, Tyrone seemingly has a mind and will of his own. He speaks uncomfortable truths at inappropriate times, spews a stream of four-letter words, goads Jason into obnoxious behavior and seeks to offend everyone within earshot. Jason might be a quiet, squirmy, wallflower sort of kid, but Tyrone is a basic punk, the unleashed id, an antagonist who takes the job of antagonizing others seriously.

One of the primary victims of Tyrone’s hostility is Jason’s recently widowed mother, Margery (Wendy Melkonian). For her, joining the puppet ministry at her Lutheran church together with her son is a last-ditch effort at establishing a normal and active social life after the death of her husband.

Some of the funniest moments in the show are in the reactions of the long-suffering Margery when Jason’s puppet begins to speak — not about sunshine, flowers and happy Bible verses but in foul language about the impulsive affair she’s conducting with one of Jason’s friends Timothy (played as a sneering, slouching, swaggering but hilariously clueless teen by the very funny Patrick Wade). The other victims of the puppet’s wrath are the easy-to-rattle Pastor Greg (Allan Edwards) and Jason’s sweet but moderately ditzy crush Jessica (Alexandra Ficken).

Fans of the foul-mouthed, subversive humor of shows like South Park will be well-served at Hand to God. It’s undeniably funny, and it makes every effort to shock (and often succeeds), a strategy that’s clearly resonating with audiences. After opening Off-Broadway in 2015, the show quickly became one of the most produced plays in the country.

It’s an agile, sleek play at an easy-to-take 80 minutes, and with just five characters (six, if you count the puppet). The show even has some genuinely touching moments; I especially admired Melkonian in this realm, who brought interesting idiosyncrasy to the character’s complicated self-hating and self-destructive behavior.

But overall there’s something too slight about the play and its tactics. I certainly enjoyed my time in the theater, and unlike so many other things that are billed as “shocking and uncomfortable,” I was genuinely shocked and uncomfortable at times, so there is still at least some truth in advertising. But I left the theater with curiously little to ponder, and strangely, I could sense myself forgetting about the show moments after it ended. The raunchy, satirical blade of Hand to God cuts quick, apparently, but not deep.