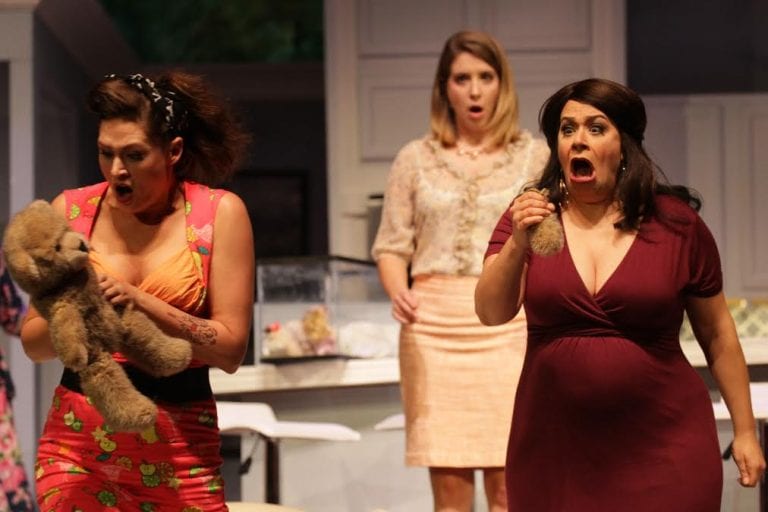 Topher Payne has developed a reputation for creating insightful women characters, and a strong all-female ensemble cast illuminates his hilarious script in the world premiere of Morningside, onstage through November 12 at Georgia Ensemble Theatre.

Payne has written a play that is teeming with one-liners on everything from cross-country RV trips (“Apparently, some people wait their whole lives to pee while riding down the interstate”) to auctions (“Happy people don’t go to auctions”). He also pokes fun at Atlanta’s vastly different neighborhoods. In one scene, a character describes doing flotation therapy and another quips that it “sounds very Little Five Points.”

If the play has any weaknesses, it’s that it is an almost farcical comedy in the first act, a dark comedy in the second act and the whole thing is about 20 minutes too long. But none of this takes away from the sincerity of the dialogue about how motherhood can be a woman’s greatest source of joy and heartbreak.

Grace’s (Shelly McCook) husband is leaving her for another woman, and she’s about to lose her mind — but no one can know it. Determined to continue with life as it has always been, she invites her older sister Louise (Ann Wilson), a homemaker who lives in Dallas, and her other sister Roxanne (Ellen McQueen), a renowned (and alcoholic) architect living in New York, down to Atlanta for her daughter Devon’s (Gina Rickicki) baby shower.

Grace has left no sprig of baby’s breath unplucked, and is determined to show her friend/neighbor Felicia (Keena Redding Hunt), Devon’s best friend Mackenzie (Stacy Melich) and Devon’s coworkers Sophie (Kelly Criss) and Elinor (LaLa Cochran), that everything is coming up roses in Morningside. But, when Grace’s younger daughter Clancy (Kate Donadio) arrives, the unhinging begins. What results is the Bridesmaids of baby showers where secrets bubble to the top.

There are fewer things more female than attending a baby shower, which is generally an occasion for women to gather the village that will be around for advice and carpool pickups. But, in this case, it is a time for everyone to assess how having children, or not having children, has impacted their lives. In this multigenerational comedy, women who are the first generations post-women’s liberation tackle issues that range from plastic and lead in childhood toys to choosing to work instead of staying at home.

The entire cast has impeccable comedic timing, but Cochran, Donadio and McQueen really shine. Cochran making an uproarious entrance in an old bridesmaid dress is theatrical gold; Donadio plays just the right amount of bratty and vulnerable as the effed up kid sister; and McQueen’s dry wit and remarkable physicality never tire.

Under the direction of longtime GET collaborator Shannon Eubanks, every element of this production is so intentional, right down to the game of guessing the candy bars in the baby diaper. Major kudos go to set designer Kat Conley for a perfect rendering of the Flip This House style of homes in the Morningside neighborhood, where the outside looks like the original build and the inside has been totally upgraded with stainless steel appliances. Also deserving accolades is costume designer Emmie Tuttle, who dressed the cast in every bit of Talbots and Chico’s realness she could find.

In the playwright’s notes, Payne says that he wanted to create a new addition to the all-female ensemble plays in the vein of The Women and Steel Magnolias. This is women behaving badly in the most delightful way, and they keep the laughs rolling from the first nervous breakdown to the last. It will be no surprise to see this show pop up in regional theaters across the country.