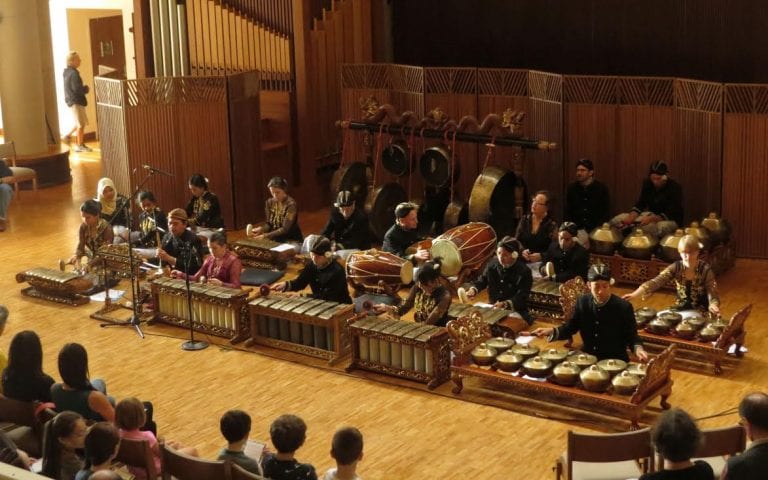 The ensemble used a set of Javanese Court instruments owned by Emory. (Photos by Mark Gresham)

The pealing tones from an array of glistening bronze metallophones and pot-like nipple gongs joyously rang out on Sunday’s sunny late afternoon as the Emory Gamelan Ensemble performed a concert of karawitan music at the 400-seat Cannon Chapel on the Emory University campus. Entitled “Memayu Hayuning Bawana” after a Javanese philosophy that means to maintain the safety, peace, happiness and well-being of both the physical world and the spiritual self, the hour-long program was a delightful excursion through seven classic and modern musical selections for Javanese Gamelan.

Gamelan master Darsono Hadiraharjo, a visiting fellow at Cornell University, was the concert’s principal guest artist and came to Atlanta to guide the Emory Gamelan Ensemble in workshops leading up to Sunday’s performance. He had previously participated in the ensemble’s Emory Gamelan Wayang 2018 in April at the university’s 260-seat Performing Arts Studio, with shadow-puppet master Midiyanto Mid. The larger and more resonant Cannon Chapel, with its modern concrete, glass, copper and wood, is a less familiar venue for the group, which typically performs at the Studio, but offered a more sumptuous acoustic for the Gamelan’s elegant, exotic tintinnabulations.

Karawitan is a type of Javanese Gamelan music meant to be heard on its own in concert rather than as accompaniment for dance or shadow puppetry. Emory owns sets of both Javanese slendro and Balinese pelog instruments, but in this concert the group used only the slendro orchestra, known as Gamelan Paksi Kencana (Sacred Eagle) — a set of Javanese Court instruments the university has owned for 20 of the Gamelan Ensemble’s 21 years of existence. The ensemble itself has comprised a diverse cross-section of Emory students, faculty and community members since its inception in 1997.

Sunday’s program began with “Ladrang Wilujeng Slendro Manyura.” “Wilujeng,” which means selamat (“safe”), is a classic greeting song used to bestow blessings of safety. (To greet someone saying selamat sore literally means “good afternoon,” for example.) The other parts of the longer name describe parameters for how the music is to be performed. “Ladrang” describes the music’s rhythmic and metric patterns. “Slendro” is the pentatonic pitch scale used by the Javanese instruments. “Manyura” is a pathet, a set of rules for limiting the emphasis on certain tones in the slendro pitch set and the player’s choice of variation — in more poetic terms, the pathet serves as the “couch” or “bed” of the melody.

Notably in “Wilujeng,” Darsono played a rebab — a bowed string instrument that is not limited to the tuning system of the orchestra’s metallophones and gongs — which allows other pitches than those of the fixed slendro to occasionally be inserted into the music, as is also the case with the human voice. Afterward, he switched to playing a trio of different-sized kendhang — double-headed drums with bright red shells, their player tasked with keeping the tempo, changing the rhythmic density and signaling transitions between sections and the end of a piece.

Following the opener came three modern Gamelan compositions: the somewhat eccentric “Ladrang Duporo Slendro Manyura” by the late composer K.P.H. Notoprojo, one of the most esteemed performers of Javanese Gamelan music; Darsono’s original composition, “Ketawang Panembah Slendro Sanga,” a musical prayer humbly offered to the Supreme Being; and “Ladrang Pariwisata Slendro Sanga,” a 1970s work by Ki Nartosabdo that expresses the composer’s joy of wandering the beauty of Indonesian nature.

The program concluded with three well-loved classics from the ensemble’s standard repertoire, starting with “Ladrang Pangkur Slendro Manyura” (pangkur literally translates to “pickaxepickaxe”). Then came an ensemble favorite, “Ladrang Bima Kroda Slendro” (“Bima Is Angry”), which captures the emotions of the fierce Manabharta warrior Bima. The concert concluded with “Bubaran Udan Mas Slendro Manyura” (“Golden Rain”), a traditional farewell song played in Indonesia as the audience departs, but in the United States often as the final work on a program or as an encore. “Udan Mas” is the best known example of bubaran — a moderately paced type of musical structure with a distinctive rhythmic pattern for the kendhang.

In addition to the instruments, some songs featured singing by combined male and female voices in unison, which could have benefited from projecting a bit stronger against the orchestra, and group hand clapping that seemed to veer out of tempo on occasion. Those small issues aside, through his work-shopping and leading, Darsono seemed to bring out the best in the ensemble’s performance, obtaining a tighter, more elegant sound than has been heard in some of their concerts in recent years. That offers credence to the notion that when continuing a musical tradition such as Gamelan, there is no substitute for having a master practitioner on hand to show the way.