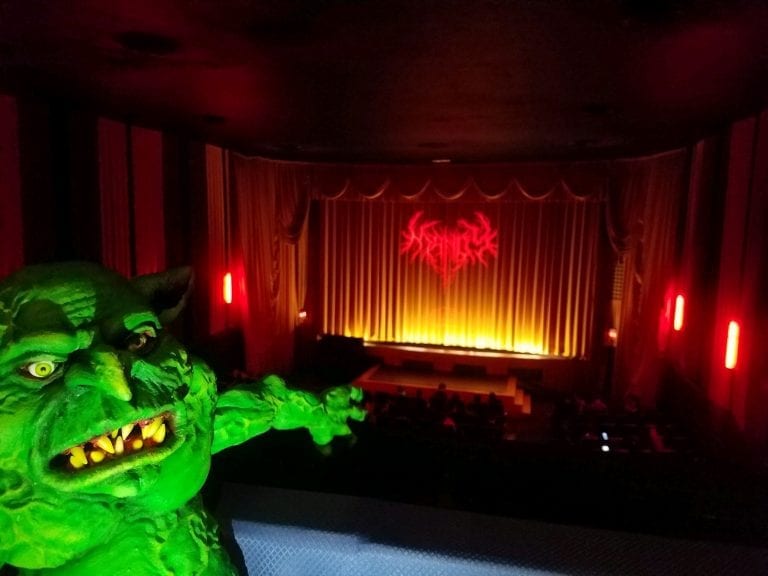 It’s hard to pick the peak insanity in the hallucinogenic Nicolas Cage-starring horror film Mandy, but the “Cheddar Goblin” (no, not a typo) seems to be winning. That commercial-within-the-film is the work of two Atlantans: director Chris Casper Kelly and special effects expert Shane Morton.

Kelly and Morton were on hand at a sold-out Mandy showing at Plaza Atlanta last Thursday to introduce the film and to explain the inexplicable: creating a fake commercial for a goblin-themed brand of mac-and-cheese.

Kelly explained that Mandy director Panos Cosmatos asked him to direct the commercial, in part because Kelly is known for offbeat projects featuring horror and props, including his viral Adult Swim video Too Many Cooks and the TV series he co-created, Your Pretty Face Is Going To Hell.

The two were on the set of that series when Kelly pulled Morton into planning the shoot, which included fabricating the puppet and making 25 gallons of “mac-and-cheese,” which included pineapple Faygo and lemon jello. They filmed over six hours at an AirBnB, pouring the food over the child actors again and again.

Now, their creation is a worldwide sensation. The actor Patton Oswalt, among others, shared his love for the Cheddar Goblin on Twitter.

The Cheddar Goblin itself was at the screening, watching from the balcony. No word yet if it will be back at the Plaza when Mandy returns on October 19.