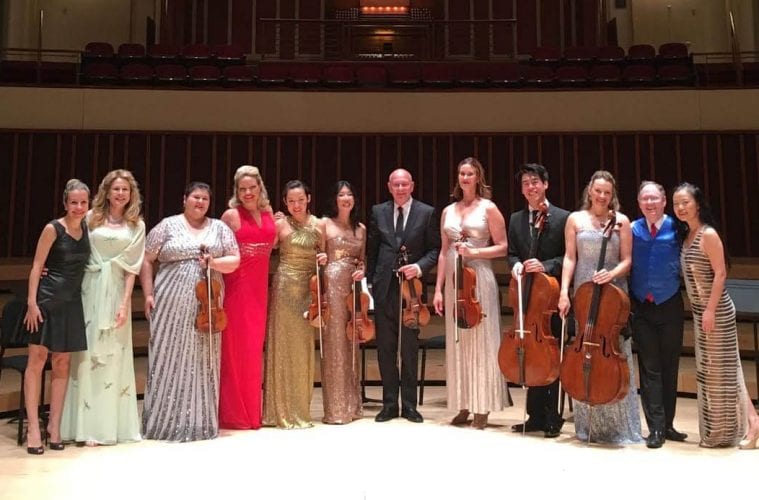 This past Saturday night the Emory Chamber Music Society of Atlanta celebrated its 25th anniversary with a gala concert at Emerson Concert Hall in Emory University’s Schwartz Center for Performing Arts. A total of 28 musicians participated in the potpourri of chamber music selections, performed before an audience that essentially filled the hall.

Organist Timothy Albrecht played his own paraphrase of J. S. Bach’s chorale, “O Ewigkeit, du Donnerwort” (“O Eternity, thou thunderword”), to kick off the program, emphasizing the presence of the Werner Wortsman Memorial Organ that looms over the hall, rising 36 feet about the stage. Music of an earlier era followed, performed by a 16-piece ad hoc brass ensemble organized by euphoniumist Adam Frey specifically for this concert. Divided into three groups, one on stage and two more poised above in the east and west galleries, the ensemble performed antiphonal music by Giovanni Gabrieli and Claudio Monteverdi, as arranged by Arthur Frackenpohl, showing off the sonic space in a celebratory manner.

Tenor Bradley Howard sang a group of four lieder from Robert Schumann’s “Dicterliebe” (Op. 48) with Emory Chamber Society’s artistic director and pianist William Ransom accompanying the songs. Clarinetist Laura Ardan and pianist Julie Coucheron performed Claude Debussy’s “Premiere Rhapsody” — a piece Ardan has performed many times, but word is this was Coucheron’s first time performing it, with delightful results from the collaboration. Ransom returned to the stage with fellow pianist Elena Cholakova for a two-piano work, Maurice Ravel’s “La Valse,” capping the first half of the concert with rambunctious verve.

After intermission, the program was devoted to 19th-century chamber music for strings, featuring guest violinist William Preucil in the principal chair. Preucil is concertmaster of the Cleveland Orchestra, and for seven years prior was first violinist of the Cleveland Quartet, but before that he was concertmaster of the Atlanta Symphony Orchestra from 1982 to 1989 and was also violinist of the Lanier Trio with Dorothy and Cary Lewis — so his Atlanta connections run deep. He has also been a frequent guest at the Highlands-Cashiers Chamber Music Festival, in western North Carolina, for which Ransom is also artistic director. The repertoire was single movements from four distinguished works for strings, each requiring a different number of players. Preucil and three members of the resident Vega Quartet (violinist Jessica Wu, violist Yinzi Kong and cellist Guang Wang) opened the second half with the “Allegro molto” movement from Beethoven’s String Quartet No. 9 in C major (Op. 59, No. 3), the last of the “Rasumovsky” quartets.

Cellist Charae Krueger and Vega first violinist Elizabeth Fayette then joined Preucil, Kong and Wang for the “Adagio” from Franz Schubert’s Quintet in C major. Violist Sonja Braaten Molloy then joined the group for the “Allegro moderato” movement from the string sextet “Souvenier de Florence” by Peter Tchaikovsky. The ensemble expanded again, this time to eight, with Wu returning to the stage along with violinist Helen Hwaya Kim for the program’s grand finale, the “Presto” from Felix Mendelssohn’s Octet for Strings in E-flat major, Op. 20. The entire last half was polished and vibrant, a fine conclusion to a joyous musical celebration.

Founded in 1993, Emory Chamber Music Society of Atlanta was envisioned by pianist Ransom, its founder and artistic director. Ransom is the Mary L. Emerson Professor of Piano and head of the piano faculty at Emory University and was named one of Musical America’s 30 Innovators in classical music in late 2016.

In a conversation with ArtsATL about how society’s evolution over the last quarter century, Ransom said that when he arrived in Atlanta to teach at Emory, he found there were a number of chamber organizations in town with varying reasons for existence, schedules and missions.

“I looked around, took a few years to see what was here and what I thought might be needed in the area,” he said. “What seemed clear to me was that the organizations that did exist had no permanent home, they had no permit funding, and no relatively permanent real chamber musicians, almost all drawn from the Atlanta Symphony.”

That still remains much the case for the city’s ensembles. Ransom suggests that’s not an ideal situation for chamber music: “It’s like pulling five basketball players together and having them play for a day or two and make a team,” he said. “If they’re rehearsing together every day, all the time, focused on the same thing . . . it’s just a different kind of level that you can reach.”

To that particular end, at the core of the society’s mission is Emory’s String Quartet in Residence program, now entering its 11th season and currently held by the Vega Quartet, touted as the first full-time professional string quartet to be based in Atlanta. Aside from the advantages of continuity, the idea of a full-time chamber musician in residence has allowed Emory to take advantage of frequent and flexible programming, including interdisciplinary work and educational outreach, both on and off campus: not only collaborating with the other arts — such as dance, theater, literature and visual arts — but also the disciplines of science, medicine, history and philosophy.

This breadth of programming that has developed over the years has contributed valiantly to the society’s primary mission “to create new generations of educated and passionate music lovers” who will continue to cherish and support classical and contemporary chamber music as a continuing, viable art form. Although its beginnings 25 years ago were of modest scope, today the chamber society can claim to being Atlanta’s largest and most active chamber music organization, its ongoing impact on the city’s chamber music scene and overall cultural life solidly established.