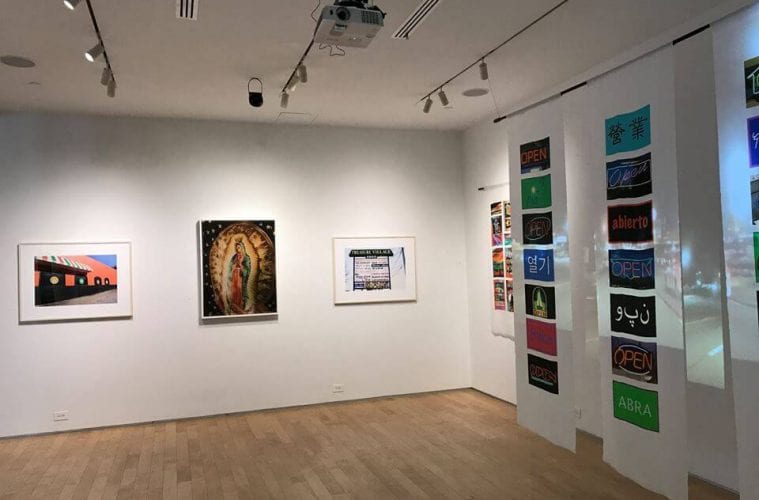 John Dean’s The Buford Highway Glyphs, at Gallery 72 through October 3, is the culmination of a 17-year project that was among the first to explore the imaginative possibilities of the unplanned multiculturalism of an urban zone that Susan M. Walcott’s “Overlapping Ethnicities and Negotiated Space” calls “an anomaly within the realm of urban enclaves” (quoted by Dean in his wall text explaining his project). 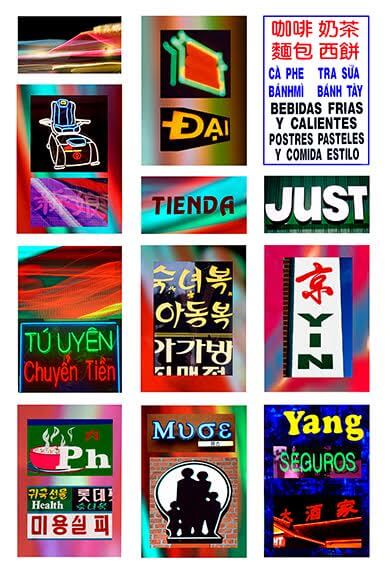 Dean discerned early a Buford Highway vernacular aesthetic that spans multiple (displaced) cultures. It’s not just the signage with parallel text in Chinese, Vietnamese and Spanish; each culture has imprinted its own expectations and preferences on standard American commercial signmaking, yet each sign reflects its place on a highway where ethnicities meet, mingle and diverge in complex harmonies.

Dean’s project ranges from documentation of diverse ethnic signage, printed spectacularly on Haboti silk or on a type of kozo (better known as rice paper) designed to accept inkjet printing, a variety “created by a Finnish guy living in France, supported by a Japanese company and sold only in Europe,” Dean commented in reply to my query. Dean is best known in Atlanta as a master printer for photographs of all sorts, so the brilliant quality of the prints comes as no surprise.

What does come as a surprise is a way in which Dean’s compositions reflect the ebullient spirit of the store signage he has arranged into witty combinations. Like the signs themselves, these works come from a very recent moment in which adjacent cultures in immigrant America had surprisingly little difficulty in negotiating one another’s linguistic territories – at least in their commercial signage – and different approaches to consumer goods. It may be necessary to remind some viewers that Dean was and is responding to a spirit of unself-conscious community that was there already, and that was what first drew him (and many other longtime Atlantans) to the extraordinary juxtapositions of Buford Highway commerce.

The most ambitious and one of the most successful components of The Buford Highway Glyphs is an installation in which Dean has projected scenes of Buford Highway onto a grid of “Open” signs in an astonishing array of alphabets and languages. The soundtrack is Dean’s own composition, best described in his own words: “As to the sound, I start out improvising on the guitar (over traffic flow sound) off of the chord changes to ‘Georgia On My Mind’ in the key of F but super slow. Then come various samples of multi-ethnic pop tunes. . . . At one point . . . I play the song ‘Tequila’ straight on the guitar from a transcription by Wes Montgomery. It becomes layered with Spanish and Asian samples, then samples of hip-hop artist Biggie Smalls . . . blended into a sample of a young Vietnamese rapper emulating the spirit of black hip-hop from the 80s and 90s. Then I go into some samples of Chinese Classical music from unknown musicians recorded in the 1930s, then African drumming samples before I go into samples of Ray Charles and Willie Nelson singing ‘Georgia On My Mind’ toward the end of the 20-minute video. That blends into me playing a solo guitar rendition of ‘Georgia On my Mind’ in the key of E in a gospel-blues ballad form.” 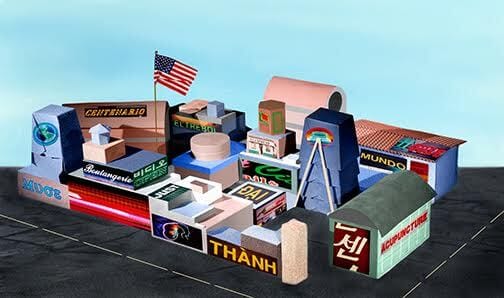 These highlights from a much longer explication make it clear that Dean knows his stuff in terms of the transmutations of global culture as much as he does in terms of producing photographic prints. It gives him permission to engage in jokes such as placing a photograph of a sign for an establishment featuring the name of Yin above one depicting the name of Yang above the word Seguros, Spanish for “insurance.” The opposites that Chinese philosophy defines as the forces driving the universe seem like an appropriate complement to an agency protecting against life’s uncertainties.

Dean’s eloquent description of Buford Highway, posted prominently on the wall, constitutes a splendid artist statement, though it would have helped to have had a bit more discussion of the thought processes behind these collages, some of the earliest parts of this evolving project. The images in which Dean constructed and photographed a diorama as a sort of condensed allegory of Buford Highway businesses and then digitally inserted the signage from his individual photographs may cause confusion, simply because it isn’t at all clear what we are looking at.