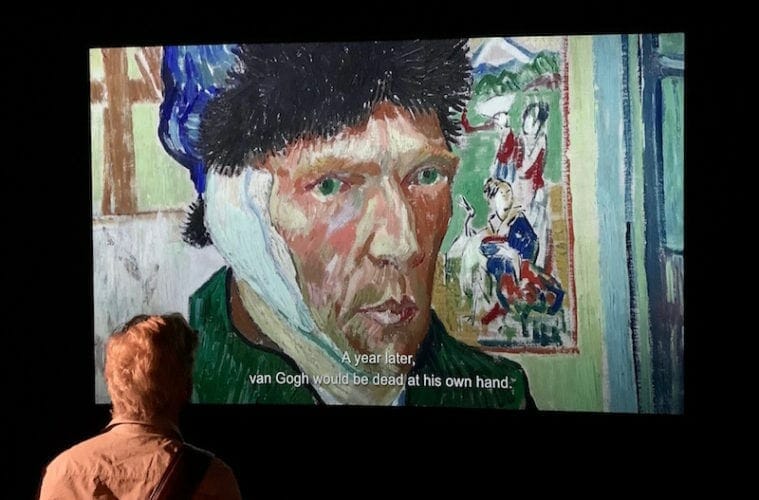 It seems like all of Atlanta’s cool kids are clicking on ubiquitous social-media advertising featuring that sort of wordplay. An astounding 200,000-plus tickets were sold before the exhibition made its North American debut here in mid-May. The May shows sold out quickly and the promotion-and-ticketing site Fever now lists only limited availability through early September. The exhibit runs through the end of the year.

It’s as if all of Atlanta emerged from the cocoon of pandemic quarantine like 17-year cicadas and declared, “I MUST Gogh.” The buzz has been hard to miss.

Presented by the European entertainment outfit Exhibition Hub in partnership with Atlanta-based Immersive Hub, the breathlessly promoted Immersive Experience promises to give guests the sense of being inside the Dutch post-impressionist’s canvases using 360–degree digital projections enhanced by enveloping light and sound. 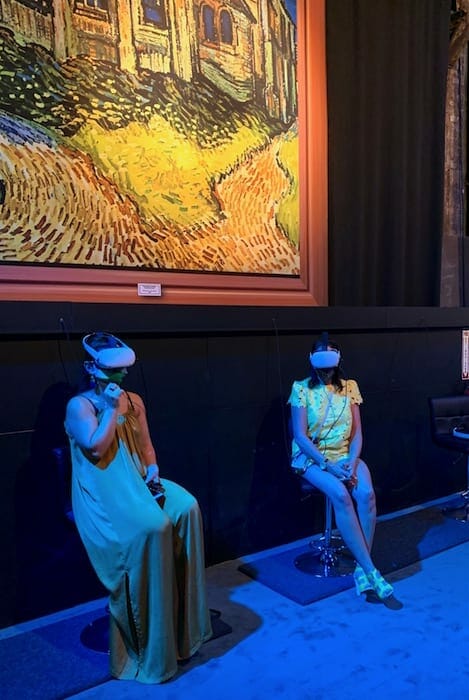 Visitors can take part in a 10-minute virtual-reality experience that depicts a day in van Gogh’s life. It requires an extra ticket. (Photo by Mary Pousner)

Being presented at the two-story, 20,000-square-foot Building 1 in hip, historic Pullman Yard (recently renamed Pratt Pullman District) in Kirkwood, the show is high-tech, high-concept infotainment. It’s the kind of thing that makes some art professors and museum professionals scoff but that generates glowing online reviews from attendees.

Intended to take visitors an hour to 75 minutes to experience, the installation begins with jazzed-up, if conventionally text-heavy, exhibits — graze-worthy appetizers that include a cool 3-D evocation of the artist’s three famed Bedroom in Arles paintings.

Space in the exhibition areas is a bit tight, especially considering that some visitors are still rightfully wary of crowds in the later days of the pandemic. So even those interested in reading more about, say, van Gogh’s sunflowers, can feel a bit pushed along by the next wave of entering guests.

But then you turn a dark corner and access the presentation’s main course — the expansive immersive room, where crowding isn’t an issue. The 35-minute show, playing on an endless loop that you can comfortably start watching at any point, features projections that fill all four 40-foot-high walls and blanket the floor. I didn’t so much feel like I “stepped into a painting” as the advertising suggests, as much as I felt I was in the middle of the biggest van Gogh coffee-table book ever, the pages turning quickly, one gargantuan gorgeous image replacing another. It also felt like seeing an IMAX-3D movie, except that the guests are free range instead of seat bound.

Van Gogh’s radiating lines and textures are frequently enhanced by animation, showing, for instance, crows soaring above the artist’s famous wheat fields and locomotives chugging across pastoral landscapes, their billowing smoke dramatically filling the walls and floor. The sense of being enveloped in a swirl of Starry Night and other classic van Gogh imagery is enhanced by Thomas Sohet’s orchestral score and the resonant narration of an uncredited actor who delivers the artist’s internal dialogue with Shakespearean gravity.

Many have called the experience meditative, others touching — and it is, in a sweetly sad way. The creative team wisely mined van Gogh’s extensive letters for passages that reflect his eye for nature in all its glorious hues, expose his extended poverty and mental health challenges, and reveal his complicated struggles to achieve simple human connection. Who cannot relate to such meme-worthy quotes (voiced as well as projected on the walls) as, “Success is sometimes the outcome of a whole string of failures” or “I put my heart and soul into my work and lost my mind in the process”? 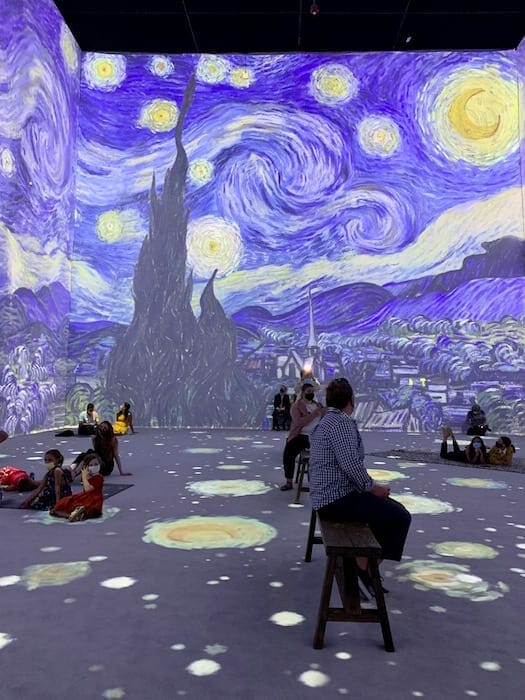 “Starry Night” gets star treatment at Pullman Yard, where projections blanket 40-foot walls and the  floor in Building 1. (Photo by Mary Pousner)

Atlanta artist Lala Wellem, who attended van Gogh with friends, found the immersiveness emotional. “I related to the melancholy, and it was a beautiful part of the experience,” she said. “I’m in a bit of a funk myself right now artistically and personally, so sitting there quietly and hearing his pain was appropriate and not unpleasant.”

“You got a real feeling for every stage he went through,” she said. “I knew of course about his Almond Blossom [paintings], but never knew until this exhibit how very much he was influenced by Japanese art.

“The other thing it really drove home,” she continued, “was how amazing it was that he was able to create so much beauty in just his short life while also dealing with mental health issues. It’s just really incredible.”

When guests emerge from the massive immersive room, there is still another high-tech dive awaiting, in the form of a 10-minute virtual-reality experience. The VR (which requires an additional ticket) takes guests through a day in van Gogh’s life in Arles, the picturesque south of France village where he created more than 200 paintings and 100-plus drawings and watercolors during a prolific nearly 15-month period in the late 1880s.

For those inspired to do their own art-making, there’s an adjoining area where they can access van Gogh coloring sheets. And they can scan them so that the completed creations become supersized wall projections, just like Vincent.

The gift shop, filled with items from geegaws to reproductions in many sizes of the artist’s greatest hits, is the inevitable final stop. 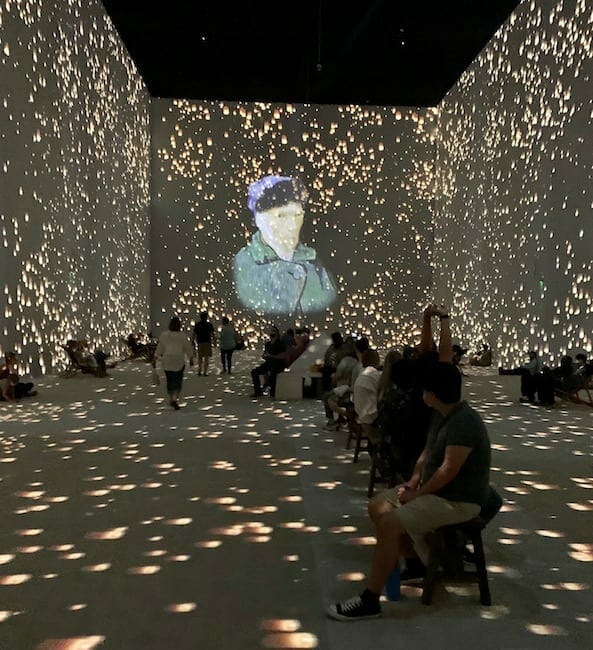 A portrait of van Gogh amid a galaxy of stars. The “Immersive Experience” continues through the end of the year in Kirkwood. (Photo by Howard Pousner)

If that sounds like a whole lot of van Gogh, this is just Atlanta’s slice. Consider that five immersive exhibits featuring the painter will play some 30 U.S. cities in the next year.

This has been building for a while: The initial immersive presentation about the artist made a splash in Europe more than a decade ago. Van Gogh Alive became the first one in America when it debuted at the Dali Museum in St. Petersburg, Florida, in 2011, where its long run continues. Van Gogh: The Immersive Experience and Immersive Van Gogh — how’s that for confusingly similar names — will attempt to get New Yorkers to, um, Gogh to one instead of the other this summer.

Mario Iacampo, CEO and creative director of Van Gogh: The Immersive Experience, asserts that his production is the van Gogh-est of all, with exhibits and extras that provide a fuller viewing experience than the touring competition.

So what is it about van Gogh, an artist who sold only one or two paintings (reports vary) during his lifetime (1853–1890) that causes him to command so much attention in 2021?

“He’s a bit of a rock star, right?” Iacampo said during a quick visit to Atlanta.

He meant that the drama-filled artist’s life appeals to audiences. He mentioned van Gogh’s short but brilliant career, that he was a pauper virtually his whole life and the friendship with Paul Gauguin that led to the infamous ear-cutting incident.

Plus, Iacampo said, the extensive letters that Vincent wrote to his brother, Theo, and others form “a natural storybook. There’s a canvas for you already.”

But what ultimately makes van Gogh so appealing, the presenter believes, is the artist’s singular work.

“There’s a richness to his art that really we haven’t seen since. All those things make him exceptional, make him someone who saw things that other people didn’t see.”

Only these days, it seems, what van Gogh saw is hard to miss.