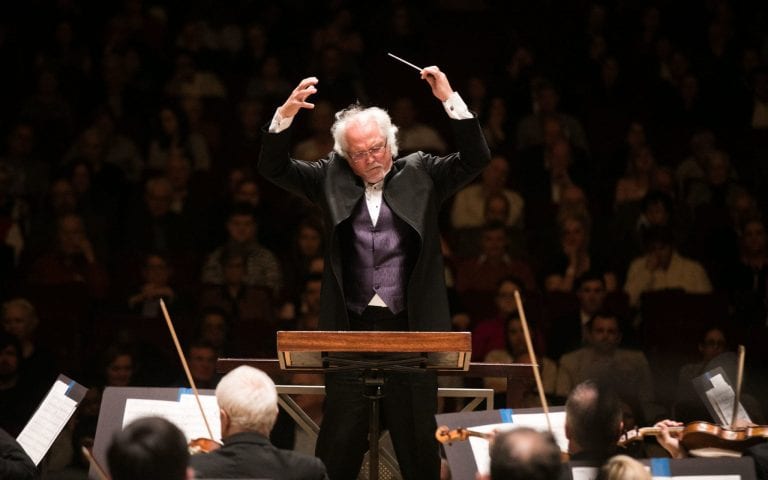 On Thursday evening at Symphony Hall, the Atlanta Symphony Orchestra, led by ASO principal guest conductor Donald Runnicles, performed a concert of music by Takemitsu and Mahler, with mezzo-soprano Kelley O’Connor and tenor Russell Thomas as guest soloists. The program will be repeated on Saturday evening at Symphony Hall. These concerts mark Runnicles’ season debut with the ASO.

The program drew inspiration from the primordial element “earth” and from cross-cultural influences between Western and Asian cultures. It was an interesting but oddly balanced program in terms of time frame, with the first half containing less that 15 minutes of music, while the second half was over an hour long.

This may explain why the concert opened with considerable talk by Runnicles plus a short film, in Japanese with English subtitles, in advance of performing A flock descends into the pentagonal garden by Japanese composer Toru Takemitsu. The film was about two Japanese musical instruments which are emulated in Takemitsu’s music: The shō (笙) — a wind instrument modeled after the Chinese sheng — and the hichiriki (篳篥), a double reed instrument which may have had a common Middle Eastern ancestor with the modern oboe.

But as mellifluous as Runnicles’ speaking voice is (a musical performance in itself), or as tangentially informative an aside the film was, I’m just not a lecture-demo kind of audience member. It comes across like trying to convince a child how good the brussels sprouts are that are about to be placed on his dinner plate. I’d rather they cut to the chase and play the music, sans the chatter — the resulting temporal lopsidedness of the program notwithstanding.

As for the music itself, composed in 1977, A flock descends into the pentagonal garden was inspired by a 1919 Man Ray photograph of artist/sculptor Marcel Duchamp with a five-pointed star shaved out on the back of his head. After viewing it, Takemitsu had a dream of a flock of white birds, with a single black bird leading, descending into a garden shaped like a pentangle — hence the title.

It is an episodic piece, a dreamlike tapestry marked with occasional great bursts of sonic color and moments of intervening silence within its unique, shifting audio landscape of Japanese and Western orchestral influences.

A German translation of eighth-century Chinese poetry — Hans Bethge’s 1907 collection, Die chinesische Flöte — served as inspiration for Gustav Mahler’s Das Lied von der Erde (“The Song of the Earth”), a cycle of six songs for two singers and orchestra. Mahler’s music is a specialty of Runnicles’ — as powerfully witnessed in his performance of Mahler’s Symphony No. 9 with the ASO last April.

The songs alternate between the singers. Three in all for each — in this instance the clarion-voiced tenor Russell Thomas, who was an ASO artist-in-residence a few seasons ago, and the warmly lyrical mezzo-soprano Kelley O’Connor, an oft-returning ASO favorite. O’Connor, Thomas and Runnicles made for a winning combination, underpinned by the expertise of the ASO musicians.

It was O’Connor as mezzo-soprano who had the final, and exceptionally long, song in the set, “Der Abschied” (“The Farewell”), almost as long as the other five combined. One can only assume that, like deaths in opera, farewells from the concert stage must take a long time. In this performance, the length was expanded by Runnicles’ choice of broad, slower-than-typical tempo, taking the risk of allowing the music to hang in the air at times but without grinding to boredom. But it also represents some of the work’s best text-painting, with Runnicles and the orchestra conjuring well in sound and emotion the images evoked by the words O’Connor sings.

Prior to Thursday’s orchestral performance was one of the ASO’s pre-concert chamber recitals, starting at 6:45 p.m., which opened with another work by Takemitsu: And then I knew ’twas wind (1992), lovely in its intimacy, often meditative but occasionally bubbling up in unrest, performed by flutist Christina Smith, violist Paul Murphy and harpist Elisabeth Remy Johnson.

That was followed by Der Wind (“The Wind”) by Austrian composer Franz Schreker, written in 1909, the same year as Mahler’s Das Lied von der Erde. It was an occasionally boisterous piece which made use of a plurality of styles, including Viennese waltz and some raggedy jazz, performed by clarinetist Marci Gurnow, hornist Jaclyn Rainey, violinist Anastasia Agapova, cellist Daniel Laufer and pianist Peter Marshall.