“It’s the place where ballet becomes friendliest all year round.” So says Jennifer Fisher, whose 2003 book Nutcracker Nation examines how E.T.A. Hoffmann’s tale became a Christmastime tradition in North America more than 60 years after its St. Petersburg, Russia, premiere. Initially, critics didn’t take The Nutcracker seriously. Some found the children’s performances to be dubious, like the toy soldiers’ battle against the Mouse King. Others wanted more drama during the second act at the Land of Sweets. Then there was Pyotr Ilyich Tchaikovsky, who composed the score. “They like to say that all he knew how to do was write pretty melodies,” says Miles Hoffman, violist and author of The NPR Classical Music Companion.

But that approachability has been crucial to the enduring appeal of The Nutcracker. Fisher’s book mentions several modern-day adaptations, including one where Hawaiians added hula. Yet another doesn’t feature ballet, though its director and choreographer hopes that it becomes as treasured as George Balanchine’s version. Then there’s Jennifer Weber’s The Hip Hop Nutcracker, a national touring production that makes a stop at the Fox Theatre on November 27.

Weber is artistic director of the Brooklyn-based, all-female hip-hop dance crew Decadancetheatre. The Hip Hop Nutcracker isn’t the first time that the Deca Crew has tackled a classical ballet — that would be Decadance vs. The Firebird, a hip-hop reimagination of Stravinsky’s 1910 ballet. Weber studied tap, jazz  and ballet at a studio near the University of Pennsylvania. But while clubbing in Philadelphia, New York and even London, she saw firsthand how hip-hop dance is just as intricate and athletic as any other form. During one of her first jobs as a choreographer for a recording artist, she realized that most didn’t share her point of view.

“In the pop music industry, the way hip-hop is often portrayed is in these little three-minute clips,” Weber says. “It’s one song, or it’s a commercial where you don’t even get three minutes, you get three seconds. When you think of hip-hop and where it comes from as a culture, it comes from parties and from the streets. In that environment, it’s not three minutes. You don’t go to a party for three minutes. You’re speaking through the language of hip-hop all night long. You’re using it to express all these emotions.”

Mike Fitelson, executive director of Manhattan’s United Palace of Cultural Arts, approached Weber to create The Hip Hop Nutcracker in 2014. From there, the Deca Crew decided to update Hoffmann’s story. Their production is set in modern-day New York City. Instead of Clara, we follow Maria-Clara, whose parents bicker constantly. Maria-Clara and her Nutcracker “prince,” who sells nuts out of a grocery cart, travel back to the 1980s, a formative decade for hip-hop. They end up at the Land of the Sweets — here, a nightclub — to see how Maria-Clara’s parents first started to fall in love.

The Hip Hop Nutcracker features DJ Boo on the turntables. The first-ever rap superstar, Kurtis Blow, is an opening act. But for the most part, its dancers move nimbly to Tchaikovsky’s elegant, sweeping melodies. Doing this was a challenge, Weber says, because hip-hop dance is more so about punching up a steady, forceful beat. 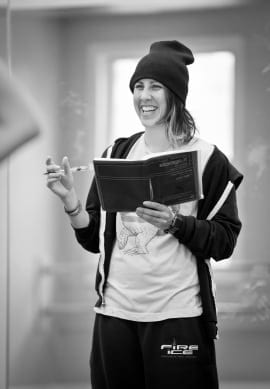 “As hip-hop dancers, what we do is translate what we hear into our bodies; we physicalize sound,” Weber says. “Being able to do that successfully means being able to listen to more challenging music. It’s not predictable, it’s not repetitive when you’re working with classical. It changes time signatures, it has all these different sounds to it, and it’s really inspiring.”

Hip-hop dance has its own stages, like talent competition show So You Think You Can Dance. But with the exception of rap in Hamilton, Lin-Manuel Miranda’s musical about the U.S. founding fathers, hip-hop culture isn’t granted the same amount of prestige as theatrical works. Take Hiplet — that’s “hip-hop” and “ballet” combined. Chicago choreographer Homer Hans Bryant created Hiplet to make ballet feel more accessible to dancers of color. After his ballerinas were featured on Good Morning America, though, one Facebook user said, “The mainstream ballet world will laugh at them if they pulled this mess in an audition for a REAL ballet academy or company.”

The Hip Hop Nutcracker isn’t just about crossing cultural divides, but about racial and class divides as well. Misty Copeland is the first Black ballerina that the American Ballet Theatre has promoted to principal dancer. To this day, some ethnic dancers in Swan Lake must powder their faces and limbs white for certain roles.

Hip-hop was born inside a 102-unit apartment building in the Bronx, by teens in displaced Black and Latino communities, to become the most influential cultural force today.

“I think the reason [The Hip Hop Nutcracker] speaks to a lot of people is because hip-hop is born out of this culture of being the language of the have-nots,” Weber says. “People who had nothing and created this language to make themselves heard. Whether that was in breaking, graffiti, emceeing, or DJing, hip-hop culture is about making yourself bigger so that you can’t be ignored. I think no matter what your background is, you have felt that. That is a feeling everybody relates to, that feeling of not having something.”

Its cast includes finalists from So You Think You Can Dance and dancers featured in the Step Up films. Their past experiences with Hoffmann’s story widely vary.

When Weber started rehearsals for this year’s version, she asked all the dancers whether they’d performed in The Nutcracker as kids, or had even seen a production. “A couple of them had been in The Nutcracker in some way when they were kids,” she says. “There were also people who had never seen it and didn’t really know anything about it.”