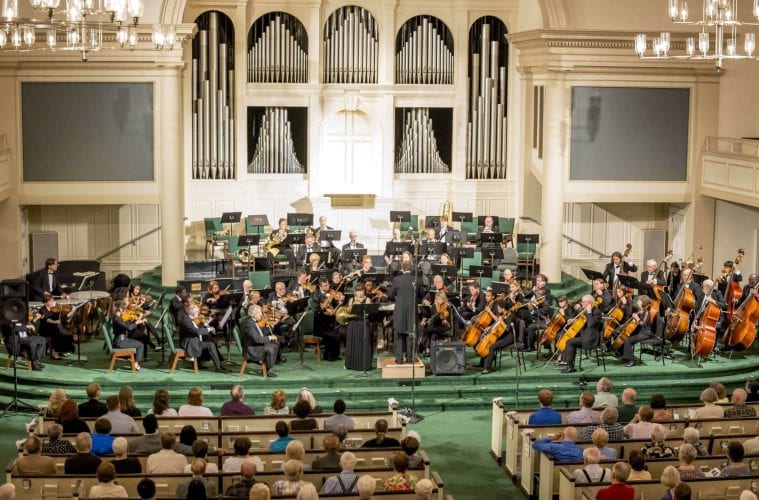 DeKalb Symphony Orchestra is comprised mostly of auditioned volunteers from the community. Only 12 principal players are paid a small stipend, as is the music director/conductor — Cherniavsky, since 2006. The orchestra’s website states that “each player in DSO devotes approximately 200 hours per year to the orchestra’s rehearsals and performances and that the average member serves for 10 years or more.”

Obviously the critical bar for reviewing such a model is not anywhere as high as it must be for a major symphony orchestra of full-time professionals. Like community orchestras nationwide, DSO and a handful of others in metro Atlanta are an entirely different animal from a major orchestra like the Atlanta Symphony.

Nevertheless, each of these kinds of orchestras serves important respective roles in the musical culture of a large metropolitan area like Atlanta. Neither is dispensable; each is an aspect of a city’s larger musical life.

The first half of the concert was a familiar work, but one played by only a small part of the orchestra: Mozart’s Serenade No. 10 (aka “Grand Partita”). The work is scored for 13 instruments, almost entirely winds: two oboes, two clarinets, two basset horns, two bassoons and four horns plus a contrabass as the sole stringed instrument in the bunch. The piece calls for an antiquated basset horn, but since few musicians play or own that instrument, those parts are often played by an extra pair of clarinets, as was the case in this performance.

It was an ambitious work for Mozart, requiring reasonably skilled players on all parts. This performance of the long, seven-movement work by the DSO winds proved rather respectable. It was a good choice for a community concert featuring classical repertoire versus a pops-oriented program.

The “Adagio” third movement, especially, has found itself a small footprint in popular culture. In the 1984 film Amadeus, it was Antonio Salieri’s first encounter with Mozart’s music. It has also been heard in an episode of the television drama, The West Wing.

Richard Strauss wrote his Horn Concerto No. 1, Opus 11, at the age of 18. His father was Franz Strauss, a highly respected horn player, so the young composer had grown up with a rather significant model for what was possible on the instrument.

Thus, this early concerto is a challenge, and has become a staple of professional horn players and the most-played horn concerto from the 19th century. Susan Welty offered up an engaging performance of the 15-minute concerto, backed by Cherniavsky and DSO.

In the three contiguous movements, Welty achieved the complex of nimbleness, lyricism and heroic character the wide ranging solo part demands from the player. She nailed the multiple instances of high B-flats above the staff, including the one at the top of the treacherous arpeggiated figure that descends over two and a half octaves to a low F only five bars before the end.

Before Stokowski made his way into the realm of conducting, he was primarily active as an organist. During that time he made transcriptions of orchestral music for himself to play on pipe organ. Later, as conductor, he made a number of transcriptions for orchestra, including 17 works by J.S. Bach. One of those orchestral transcriptions was of Bach’s infamous solo organ work, the “Toccata and Fugue in D minor.”

That transcription, which was included in Walt Disney’s iconic feature-length animated film, Fantasia, was DSO’s closer for the evening, bringing on the orchestra’s low brass for their sole appearance in the concert, contributing greatly to the music’s broader resonant grand strokes.

There were moments, however, when some of the fugal work among the strings and woodwinds got away from Cherniavsky’s even-handed conducting. But he was ultimately able to bring them back in sync at key musical landmarks and reestablish unity, especially at the end.