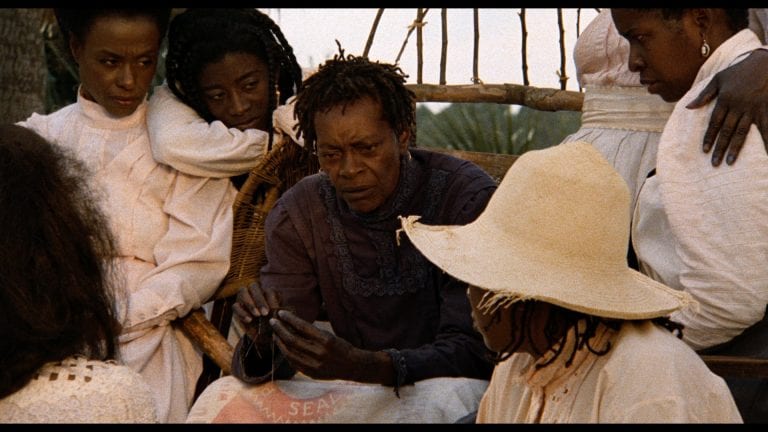 Daughters of the Dust was written, directed and produced by former Atlantan Julie Dash.

Writer-director-producer (and onetime Atlantan) Julie Dash’s Daughters of the Dust takes place at a seaside picnic on an isolated Sea Island called Dawtuh in 1902. It’s set on a single, particular day, but the movie itself seems to verge on eternity.

Presented in a 25th-anniversary digital restoration, Daughters took Dash several years to make, on a barely-there budget. I interviewed her for the AJC when she seemed just about to break out. At the time she was living in a modest, kinda crummy apartment near the old Broadview Plaza. When we talked, all bets were that she would be the Next Big Thing. That never happened.

You could say that Ava DuVernay (Selma, 13TH) is the new Julie Dash, and good for her. But y’all, there needs to be more than one woman of color touted as flavor of the month every quarter century or so. We huzzahed when the first woman of any color, Kathryn Bigelow, won an Oscar for directing The Hurt Locker. But in terms of race and gender in Hollywood — among other minority impediments — progress still seems to be two steps forward, and 1.5 steps back.

I’m stepping off the soap box now. Let’s talk about the movie.

Daughters of the Dust is a glorious mess — but let me emphasize the glorious, not the mess. It’s a tone poem that couldn’t care less about narrative focus or dramatic arc. You could guess that the long time it took Dash to pull the movie together is reflected in its haphazard structure, both its strength and weakness. What holds it all together — besides the loving celebration of centuries-long family ties on the edge of change — is the imagery.

That kicks off with the vision of a woman in a blazing white dress and hat that sports the kind of flowing veil a beekeeper would love. She’s in a rowboat being poled through a bayou of Ibo Landing (once located on St. Simon’s Island, though the movie was shot up the coast in St. Helena, South Carolina). This is Yellow Mary (Barbara-O), a citified prodigal daughter coming back from Savannah and parts elsewhere to the home place she left behind. Having the nerve to bring her girlfriend Trula (Trula Hoosier) with her, she’s one of a large, extended clan returning to the brief embrace of their distinct, African-infused Gullah culture.

The matriarch is Nana Peazant (Cora Lee Day), who has vowed to stay on this island of her ancestors, even as the younger family members prepare to head to better opportunities in the world beyond. They include Eula (Alva Rogers) and her husband Eli (Adisa Anderson), both worried about the future, and especially the baby Eula carries, which may be the result of a rape. Then there’s Viola (Cheryl Lynn Bruce), a Baptist missionary who disapproves of the old African ways, and brings with her one Mr. Snead (Tommy Redmond Hicks) to document the family picnic with his enormous camera. And there’s Haagar (Kaycee Moore), a strong-willed woman more than ready to say goodbye to the seaside and superstition and find her way in the modern world. Running unseen among them all is our narrator, the Unborn Child (Kai-Lynn Warren), still in Eula’s womb, who observes the actions of the family she has not yet met on Earth.

Actually, there are a lot more people in the movie than these (including one played by the recently deceased Gullah authority, Vertamae Grosvenor). It’s like being invited to a big party, thrown by folks you barely know. Though you’re confused about who’s who when you get there, you know you have plenty of time to figure it all out as you become better acquainted.

At their best, the Peazant clan have idiosyncrasies that can remind you of characters from Toni Morrison’s novels; Haagar, in fact, is only one letter away from Hagar of what, for me, is Morrison’s finest novel, Song of Solomon. And with the emphasis on the pull of African ancestors, the power of ghosts and the horrors of the Middle Passage, Daughters of the Dust shares themes with August Wilson’s plays, including Joe Turner’s Come and Gone and The Piano Lesson.

It’s a movie of storytelling and digressions, gossip and ritual, with tensions tested between Christianity and the old African rituals, superstitions and the logical promises of the modern world. Daughters is something you sink into, submit to. And if it gives you that too-much-of-a-good-thing, out-in-the-sun-too-long buzz of an extended family outing, you’re on the movie’s wavelength. It’s an undisciplined piece of work, but that’s outweighed by its generosity of spirit, and its observation of a quickly vanishing (even in 1902) culture.

Footnote: If the imagery of Daughters of the Dust seems weirdly familiar, you’ve probably watched Beyoncé’s Lemonade videos; she was inspired by the movie’s look. Her interest, in turn, nicely coincided with its 25th anniversary. While I’m in the footnote mode, if you wonder what the future might have held for all these Peazants heading out into the industrialized America, put this on your must-read list: The Warmth of Other Suns, Isabel Wilkerson’s glorious 2010 National Book Award winner for nonfiction. It follows real-life stories of three families who made the great migration away from the Jim Crow South of the 20th century. What do you bet that, long before she started researching her book, Wilkerson watched Daughters of the Dust?

Daughters of the Dust. With Cora Lee Day, Barbara-O, Kaycee Moore. Written and directed by Julie Dash. In English, Gullah, French and other African dialects, with some subtitles. Unrated. 112 minutes. At Landmark Midtown Art Cinema.