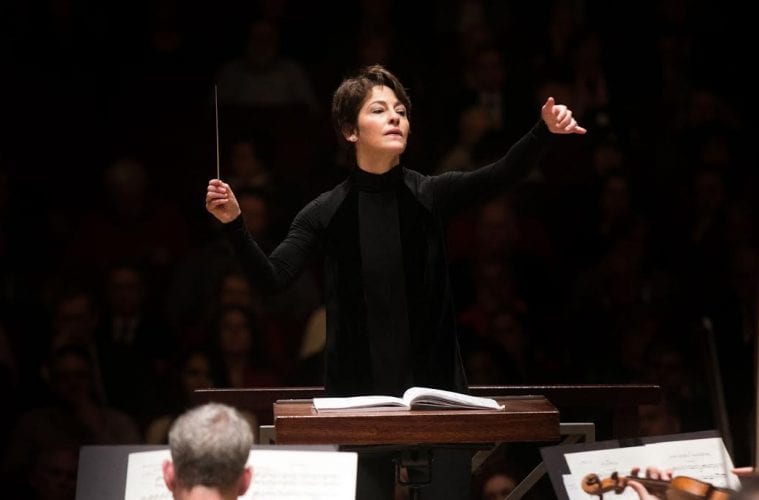 On Thursday night at Symphony Hall the Atlanta Symphony Orchestra performed a concert of music by Respighi, Vivaldi, Dorman and Tchaikovsky, led by guest conductor Laura Jackson with mandolinist Avi Avital as guest soloist. The program will be repeated on Saturday at Symphony Hall.

The program was one of balanced contrasts: short works for small orchestra in the first half, with a mix of ancient and contemporary influences, each receiving its first ASO subscription performance; in the latter half a single work for large orchestra drawn from the familiar 19th-century Romantic orchestral canon.

Jackson, who had served with the ASO as assistant conductor and American Conducting Fellow from 2004 to 2007, and is currently in her seventh year as music director of the Reno Philharmonic, opened the program with Ancient Airs and Dances, Suite No. 1 (1917), by Italian composer Ottorino Respighi. Based upon Renaissance lute music of the 16th century, Respighi’s delightful transcriptions for small orchestra set the stage for the rest of the first half of the program, which focused upon the mandolin in a pair of short but greatly contrasting concertos for the instrument, played by Avital.

Antonio Vivaldi’s Mandolin Concerto in C major, RV 425, was written in 1725, the same year The Four Seasons was published. Though many listeners do not know it by name, they have most likely heard it, as it was featured in the score for Robert Benton’s 1979 film Kramer vs. Kramer. Even without that element of popular culture in its side, it is one of the most famous classical works for mandolin, certainly the fundamental works of early repertoire. Mandolinist Avi Avital performs with Laura Jackson and the ASO.

The tempo seemed a little rushed in this performance, however, leaning toward Avital’s capacity for velocity, though his talent for exquisitely sensitive playing was every bit as prominent. His mandolin, made by Israeli luthier Arik Kerman, has a fine round, sweet sound, and Avital made full advantage of that. Yet he also came across as an energized, assertive player. The plectrum wear on his mandolin’s soundboard is observable, and makes one playfully wonder if it will eventually meet the same end as Willie Nelson’s classical guitar “Trigger” — absent the autographs.

Avital, Jackson and the ASO followed up with a contemporary work, the Concerto for Mandolin and Strings by Israeli-born composer Avner Dorman. Like the Vivaldi, this was the first time Dorman’s mandolin concerto has been performed in an ASO subscription concert, but it’s not the first time ASO audiences have heard a concerto by the composer. At the beginning of last season, led by music director Robert Spano, the orchestra performed Dorman’s winningly exotic concerto for two percussionists, Spices, Perfumes, Toxins!, with then-ASO principal percussionist Tom Sherwood (now with The Cleveland Orchestra) and fellow ASO percussionist Charles Settle (who leaves at the end of this season to become principal percussionist for the Toronto Symphony).

Dorman’s 16-minute Concerto for Mandolin and Strings, written in 2006, the same year as Spices, Perfumes, Toxins!, is likewise an impressive, engaging work, which proved a fine vehicle for both Avital’s virtuosity and his expressive abilities. It showed off both the mandolin and the orchestra, and served as an excellent foil to the Vivaldi. Avital premiered it with conductor Andrea Gottfried and the Rostov State Theater Orchestra in 2006 and recorded it with Andrew Cyr and the Metropolis Ensemble for the Naxos label.

Avital returned to the stage to play as encore “Bucimis,” a traditional Bulgarian piece. Worth noting here that after Saturday’s concert with the ASO, Avital will head up the road to Athens, where he will play a recital with harpsichordist Kenneth Weiss at Ramsey Concert Hall on Sunday afternoon.

After intermission came Pyotr Ilyich Tchaikovsky’s Symphony No. 6 (“Pathétique”). The piece was an ear-opener in that Jackson led the ASO in a performance that was in no way rote, but a very personal, insightful and empowered rendering of this well-known work, one which kept hold of the listener’s attention. It was clear that Jackson knew exactly what she wanted from the orchestra, and the performance demonstrated just how far she has come as an assured conductor since her time as an ASO assistant conductor and conducting fellow.