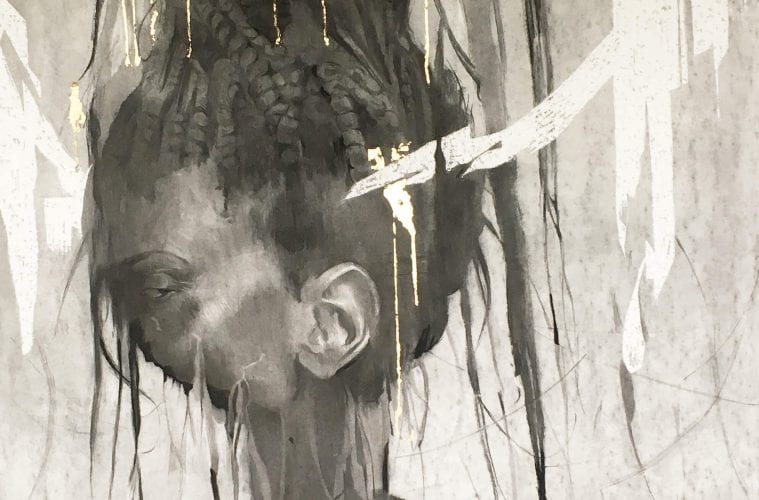 Review: Cosmo Whyte brings a touch of the Baroque to photos, drawings at Marcia Wood

The two photos, Stranger than the Village and Heirloom 3, are both self-portraits and documentation of Whyte’s performance work. However, it’s wrong to see these large-scale C-prints just as souvenirs of an event; they are so much more. The C-prints are presented mounted on die bond, floating off the wall on cleated supports, giving them the presence of 18th-century paintings, with a central figure emerging from a dark background that is almost black. In Stranger than the Village, the artist turns his back to us. While this gesture may seem disrespectful to the viewer, I prefer to think that Whyte is drawing attention to the photo of the author James Baldwin pinned to the back of his jacket. Whyte is subordinating his own image to Baldwin’s by not showing us his face. Baldwin, who dealt in his writing with the complexities of race, gender and place, is one of Whyte’s heroes, along with theorist Stuart Hall, who is known as the father of cultural studies (Whyte has another photo, not in the exhibition, with an image of Hall pinned to his back in a similar gesture of deference).

There are layers of meaning in these photos, but what is most interesting is the relationship of this C-print to representational painting. These works recall the Baroque: the artist emerges from the darkness, the light illuminates the figure, the pins that hold the portrait of Baldwin glisten and catch the eye. In Heirloom 3 the artist is once again depicted in a sea of darkness, the light hitting his hands and feet. The figure is bound with multiple neck ties around his face so we cannot see his features or expression; his head and, most importantly, his eyes are obscured by this object of male attire that symbolizes the code of business dress. He drops a tie, which floats in mid-flight like a charmed snake. There is a little nod to surrealism here with the tie as a stand-in for Magritte’s bowler hat. The patterned silk both masks and reveals the man: the tie hides his face but at the same time articulates his masculine identity.

As strong as these photographs are, it is in the drawings that Whyte is clearly in his zone. The large-scale charcoal drawings are held to the wall without glass between the viewer and the work. Cut Eye is a portrait in which the figure’s face is cut and eliminated, erased so what remains is an eyebrow and an eye, a beautifully modulated cheek, a very sculptural ear erased into a rounded form. A crown of braids rises out of the round piece of head and then cascades downward. There are large gestural areas of erasure that are so fluid they read as a kind of abstracted calligraphy. Gold leaf and glitter adorn the crown of hair, and on the décolletage and just below the collar bone Whyte adorns his drawing with “Bye Felicia” in cut scripted letter of charcoal collage. Kiss Mi Neck Back, a large charcoal drawing hung side-by-side with Cut Eye, also depicts a head with elaborate braids that obscure what would be the face. Here, Whyte has drawn in charcoal a sculptural ear set on the head. The braiding creates an amorphous shape with a swish of erasure that is like fallen paint in its gestural quality, with pieces of gold leaf that drip from the crown of the head. In this drawing, Whyte has cut into the paper on the edges in a staccato pattern that follows no obvious organization, but it opens up the drawing and connects it to the doilies featured in the installation works in the exhibition.

When Whyte works in charcoal, drawing on a large scale, something more than message takes over; he transforms his content into deeply resonant images. One only has to look at Vessel 2, a large charcoal drawing, to see how this artist can hold onto his content yet transform the form and elevate the meaning. The articulation of the face, the floating of the body, and the gesture and movement outplay any rhetorical intention. The third aspect of the exhibition is a small collection of assemblages and sculptural installations, including The Enigma of Arrival in 5 parts: Part I: Guess Who Is Coming to Dinner, a work that hangs from the ceiling of the gallery’s foyer as you enter the space. It is a group of orange life vests adorned with mussels on a shipping palette. Perhaps the life vest has been used too much lately — the idea of it as something that will save you has been diluted by its use so often in contemporary art. The same is true to a lesser extent of The Enigma of Arrival in 5 parts: Part 2: Carry On, which consists of a row of airline seats that have been upholstered in a floral pattern and covered in grandma’s plastic slipcovers and doilies, set on a shipping palette festooned with broken plates. If these works were part of a performance, I would be riveted to see how Whyte might use them, but on their own they are shadows of those made by artists from the last century like Rauschenberg and Kienholz.

Whyte’s artist’s statement encourages his viewers to perceive his pieces as conceptual artworks that articulate how identity changes in diaspora. His art is informed by his need to articulate his ideas, experiences and ruminations on migration, immigration and his personal experiences and identity as a black male. Whyte keeps asking the question of who he is through artworks in which the articulation of the image is disrupted and ruptured. This emphasis on content does not always serve him well, however. Starting a Bush Fire includes many works that succeed most when the artist gets out of his own way.