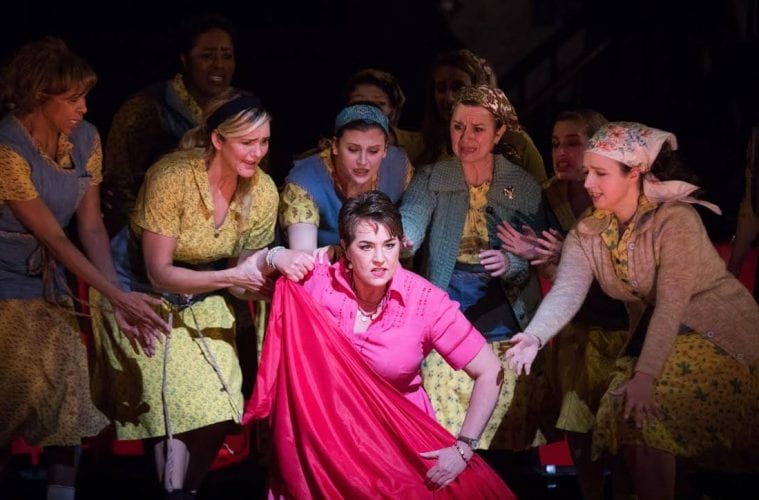 Review: The Atlanta Opera puts an exciting cinematic touch on “The Flying Dutchman”

On Saturday evening The Atlanta Opera opened its main-stage series of the 2017–18 season with the world premiere of an excellent, intriguing new production of Richard Wagner’s The Flying Dutchman at the Cobb Energy Performing Arts Centre. Coproduced with Cincinnati Opera and Houston Grand Opera, Atlanta got dibs on the debut performances, three of which remain: tonight, Friday and Sunday, November 7, 10 and 12. The haunting production will subsequently move on to enjoy performances by Cincinnati Opera in early July 2018 and then by Houston Grand Opera next fall. All three companies share a vital stake in the production’s ownership.

One could easily wager that if Wagner were alive today, he would be a writer, director and producer of Hollywood films, not opera, and this new production’s attempt at cinematic sweep and theater of the mind plays directly to that sentiment from the outset, with its extensive use of projections and multimedia on top of a starkly gray, imposing physical structure to create the The Flying Dutchman‘s overall dystopian and darkly psychological environment.

The last time the Atlanta Opera performed Dutchman was in 2009, at this same venue. But that rented production, in its traditional realism, could not be more different from this new one, although both productions share three key personnel in common: Tomer Zvulun, who was making his Atlanta debut as a freelance stage director in 2009 and then in 2013 became the Atlanta Opera’s general and artistic director; conductor Arthur Fagen, who would become the company’s music director in 2010; and tenor Jay Hunter Morris as Erik the huntsman, who in 2011 received a major break with New York’s Metropolitan Opera as Siegfried in Wagner’s complete Ring Cycle that would catapult him to major operatic fame when, as understudy, he stepped into the role at the last minute when the principal cast tenor got sick.

Making his Atlanta Opera debut, bass-baritone Wayne Tigges portrays the title role of the Dutchman, the captain of a ghost ship who is cursed to roam the seas, allowed to come ashore only once every seven years to find a wife who can redeem him through her faithfulness to death. Tigges cuts a kind of “badass pirate” figure as the cursed Dutchman, whose eye patch and black clothing, draped over with a long red coat, parallels the production’s imagery of the ghost ship itself, with its blood red sails against a black, tumultuous sky. The red-and-black color pairing proves significant in symbolism for the rest of the opera, as the production makes a strong use of such visual leitmotifs as Wagner does with the musical ones.

From the opening note of the overture, Fagen’s orchestra is especially impressive in this performance, giving strong emotional and underpinning to the drama. Similarly splendid was the large Atlanta Opera Chorus, prepared by chorus master Rolando Salazar, which had an extensive role throughout, performing on a stepped-up level. 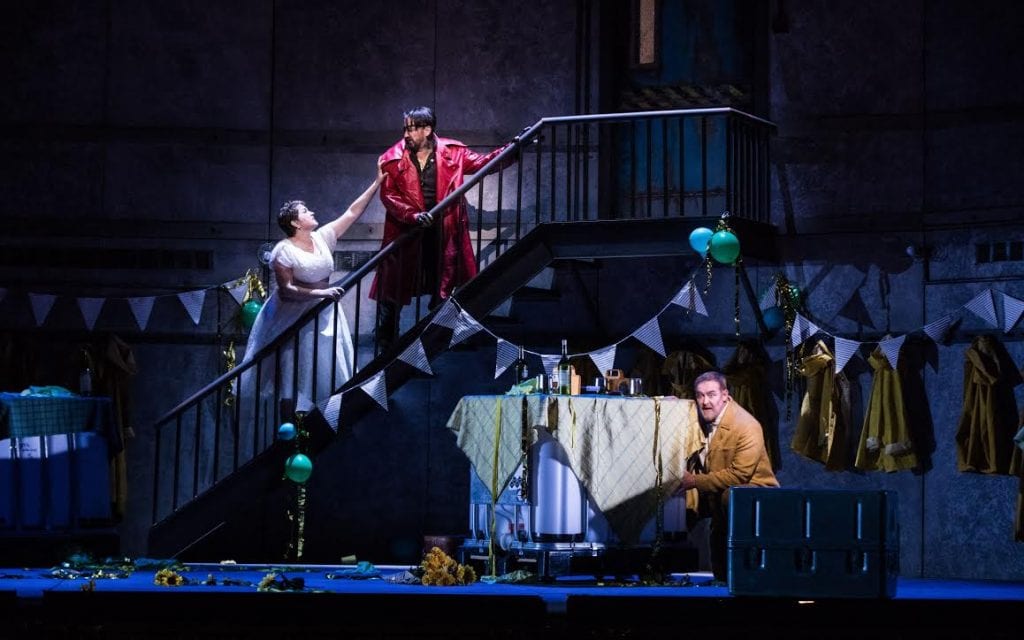 Senta (Melody Moore) is in a classic lover’s triangle with the Dutchman (Wayne Tigges) and Erik (Jay Hunter Morris).

Another singer appearing in his Atlanta Opera debut in these performances is the dark-toned Icelandic bass Kristinn Sigmundsson in the role of Daland, a Norwegian sea captain and businessman whom we meet in Act I along with his helmsman (tenor Justin Stolz, one of the Atlanta Opera’s in-house studio artists). It’s in the first act that Daland and the Dutchman make a deal: the Dutchman’s extensive treasure in exchange for lodging on shore and potential marriage to Daland’s daughter, Senta.

Mellifluous-voiced American soprano Melody Moore portrays Senta, first appearing in Act II, whose obsession over the folk legend of the Flying Dutchman becomes truly compulsive when she and the Dutchman ultimately meet. In the context of this modernized production, the opening of this second act is set in the Daland Sail Factory, where the women of the chorus are workers, as is Senta, but in contrast to the white sails handled by the other women, hers is red, as is her dress — that use of color as a connecting leitmotif again, incipit to her connection with the Dutchman.

The other female role, Mary, sung by mezzo-soprano Olivia Vote, is ostensibly Senta’s nurse in the libretto, but here she is portrayed as a factory forewoman, thus the supervisor of the workers. She is the pragmatic one who keeps production on even keel, the woman with the sensible shoes and eyeglasses, one might say, a foil to Senta’s daydreaming and reluctance to work.

The factory itself is a cold, steely gray, with a poster hanging high above of a man that turns into the Dutchman in Senta’s mind. The dystopian design of the factory and the character of poster were “based on inspiration of totalitarian society,” Zvulun told ArtsATL. “The idea is a suffocating society that compels individuals to escape — [the television series] The Handmaids Tale [and Orwell’s] 1984 all come to mind.”

In this scenario, at last enters Erik (as mentioned earlier, Jay Hunter Morris), the huntsman, a sympathetic character and the only person in the entire opera not umbilically connected to the sea, and ostensibly Senta’s fiancé, at least until the Dutchman shows up, which greatly complicates matters for Erik through the end of the opera.

Not to say that matters are uncomplicated for anybody. The drama is rife with foils. Certainly Erik, a land-based and more stable personality, who would be a meritorious husband for any sensible, non-obsessed woman, is a foil for the wildly impetuous, unredeemed Dutchman, but so is the helmsman, who joyfully anticipates going home in Act I, versus the Dutchman who can never go home. Mary serves as a minor foil to Senta. There are also the abstract ones: a fair south wind contrasting to an ill north wind; the safety of land versus the unpredictable tempestuousness of the sea.

Of course, Senta and the Dutchman are also a matched pair, outsiders set against a conforming society, in what today might be analyzed as intense mutual manic-depression, but which Wagner (perhaps in his own apparent manic-depression) viewed as a metaphysically fated love that must pass through death to obtain redemptive escape. In the end, as cray cray as it may seem, Senta demonstrates her faithfulness to the Dutchman by leaping into the sea as his ship departs, and the ghost ship vanishes. The curse is ended, and Senta and the Dutchman are seen together in silhouette at the top of the high back wall, postmortem, freed by love from the bonds of this mortal coil. The 19th century certainly loved its high-order Byronic heroes, by golly. Certainly Wagner did.