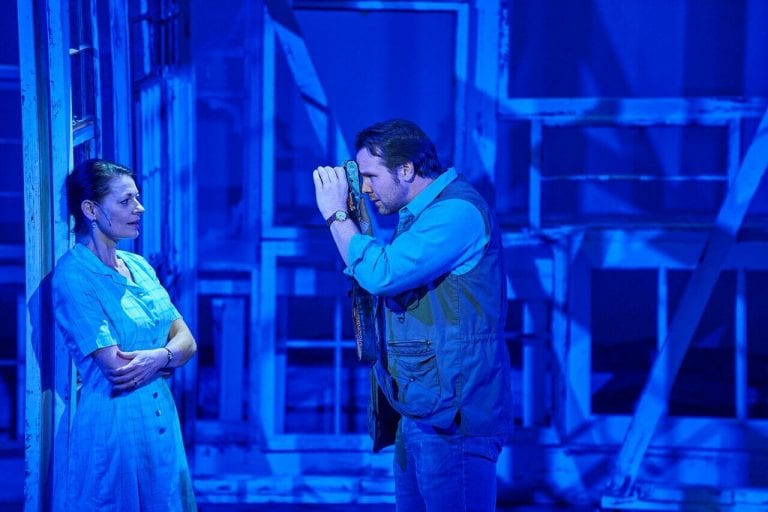 Aurora Theatre's Bridges of Madison County won a Suzi for Best Musical, while Kristin Markiton (left) won for Best Actress in a Musical and Travis Smith (right) for Best Actor in a Musical. (Photo by Chris Bartelski.)

When the Suzi Bass Awards — recognizing excellence in local theater — were handed out last night, the evening’s big winner was Aurora Theatre’s The Bridges of Madison County, which picked up seven awards, including Best Musical.

Based on the 1992 book by Robert James Waller and later turned into a Clint Eastwood-directed movie, the production charts the brief relationship between a lonely Italian-American woman living in Iowa with her family and a photographer visiting the area. The production — staged by Aurora Theatre earlier this season — also took home Best Director of a Musical for Justin Anderson, Best Actress in a Musical for Kristin Markiton and Best Actor in a Musical for Travis Smith.

Markiton thanked Ann-Carol Pence — Aurora’s cofounder and associate producer, who herself won an award for the show’s musical direction — for pulling her out of retirement to take the role.

Smith — who had been nominated in the same category for his work in Theatrical Outfit’s Big Fish — also thanked Pence, who he said “believes I can do things I never thought in a million years I could do.” The performer snagged the same award a few seasons back for the Aurora Theatre-Theatrical Outfit collaboration Memphis.

Anderson is in Albania directing Twelfth Night at Teatri Metropol, and his award was accepted by Anthony Rodriguez, cofounder/producing artistic director of Aurora. “Hiring Justin Anderson was a game changing event,” Rodriguez said. “He is an amazing artist and amazing friend and colleague.”

Best Play was given to Actor’s Express’ The Crucible, Arthur Miller’s timeless drama about the Salem witch trials. Freddie Ashley — the Actor’s Express’ artistic director who directed the show — admitted that in the fall of last year he asked himself why he was doing the show — after the election. “I thought, after the election, it’s all going to go back to normal,” he said. “Little did I or anyone else know. Because of everything that the election did show, the play felt more urgently needed than it had in a while. We do live in dangerous and interesting times. We have a responsibility in our line of work to be aligned in the darkness. This play was one way of doing that.”

The show also won for Lead Actor in a Drama for Jonathan Horne for his role as John Proctor, and Featured Female Actress in a Drama for Shelli Delgado, who portrayed Abigail Williams. Horne says the show is one he thought he was never going to be able to do. “This is a dream role,” he said. During the first three weeks of rehearsals, he had a throat issue that rendered him unable to speak, but he was able to recover and get through it.

Synchronicity Theatre’s Eclipsed — a drama about five Liberian women near the end of the Second Liberian Civil War, written by The Walking Dead actress/playwright Danai Gurira — received four honors, including Best Director of a Play for Tinashe Kajese-Bolden and Best Ensemble in a Play.

Kajese-Bolden thanked the cast of the show and Rachel May — artistic director of Synchronicity — for aggressively going after the play. “Nothing I can say is as elegant as what Dania wrote,” she said. “I was asked many times why we need this play. I said I don’t want to do this play about those black women over there in that dark continent fighting that war. Eclipsed was about five women finding their voice after years of silence, who started to name their oppressors. This war is not being staged all around me but upon me and I’m going to speak out. Right now, in this industry that I love, women and men are finding their voices and saying no more.”

In something of an upset, Christina Leidel was named Best Actress in a Play for The Miracle Worker at Gypsy Theatre Company. The actress confessed that she had no idea she could win. “Are you sure? I thought I was going to be drinking in my seat all night,” she said. The actress started rehearsals for the show the day after she moved to the area.

Jeff McKerley took home a well-deserved award for Best Featured Actor in a Play for his scene-stealing Miss Tracy Mills in Actor’s Express’ The Legend of Georgia McBride, while Don Finney was named Best Featured Actor in a Musical for his work as Mrs. Peachum in 7 Stages’ Threepenny Opera.  It was nice to see two veterans pick up awards. McKerley, in particular, has given several award-worthy performances in other local productions the last few seasons.

Rounding out the acting awards, Julissa Sabino was cited as Best Featured Actress in a Musical for her role as Betty Rizzo in Serenbe Playhouse’s Grease.

The awards — named after the beloved character actress who passed away in 2002 — were held at the Conant Performing Arts Center at Oglethorpe University and hosted by playwright and actor Topher Payne. Comic relief was provided by actor Rob Cleveland, one of the night’s presenters and also a cast member of The Bridges of Madison County. He joked that he was rarely considered to be in a musical, much less sing, before the role came up.

In all, 30 trophies were given out. Among the awards distributed was the Lifetime Achievement Award to Georgia Ensemble Theatre’s Bob Farley and Anita Farley. Payne acknowledged the pair for placing a premium on telling the stories they want to tell and worrying about the commercial aspects later. Bob Farley is retiring next spring after founding the Roswell-based company with his wife Anita. “This is the year I am going to learn to dance with another partner,” Anita said. “It’s been a great journey. Bob has taught me the best idea wins.”

Bob Farley acknowledged his frequent collaborators — “those who have always said yes to me over the last 25 years” – as well as the cast of his recent Once on this Island, Payne — who he has collaborated with the last seven years — and Alan Kilpatrick, who will be taking artistic control in early 2018.

Lois Reitzes of WABE was given the Spirit of Suzi Award for her commitment to the arts. “For 38 years, she has been our voice on public radio,” said presenter Susan Booth, artistic director of the Alliance Theatre. “She has celebrated, investigated, aided and championed the arts in our city. She loves what we do. In the first six months of 2017, she did 80 features and interviews about Atlanta theater.” Accepting the award, Reitzes recalled that the Goodman Theatre in Chicago was her introduction to theater. “I was five and I saw Treasure Island,” she said. “I can still picture the set, the interior of the theater and feel that magical sensation.”

The Gene Gabriel Playwriting Award went to Payne for his Greetings Friends, Your Kind Assistance Is Required, produced by Georgia Ensemble Theatre, while Best World Premiere — in another upset — went to Aurora Theatre’s Singles in Agriculture. Payne wrote his play during the 2016 election period. “I wrote this as an appeal for decency, kindness and curiosity about other people, people different from yourself, and the power about finding there is another way of doing things,” he said.

The 2017 Audience Choice Award for Outstanding Season was awarded to Synchronicity Theatre.

The Alliance Theatre’s world premiere musicals The Prom and Troubadour — liked by many and thought to have a chance at winning some prizes — instead only took home one award each.

The big winner of the night in terms of theaters was Aurora, which netted 10. Behind them were Actor’s Express with five, and Synchronicity and Alliance Theatre with four each. A full list of winners can be found here.